It’s not just hawkers, but as the city has grown, housing societies, commercial complexes, rogue garages and illegal parkers have all taken a dump on the humble walker 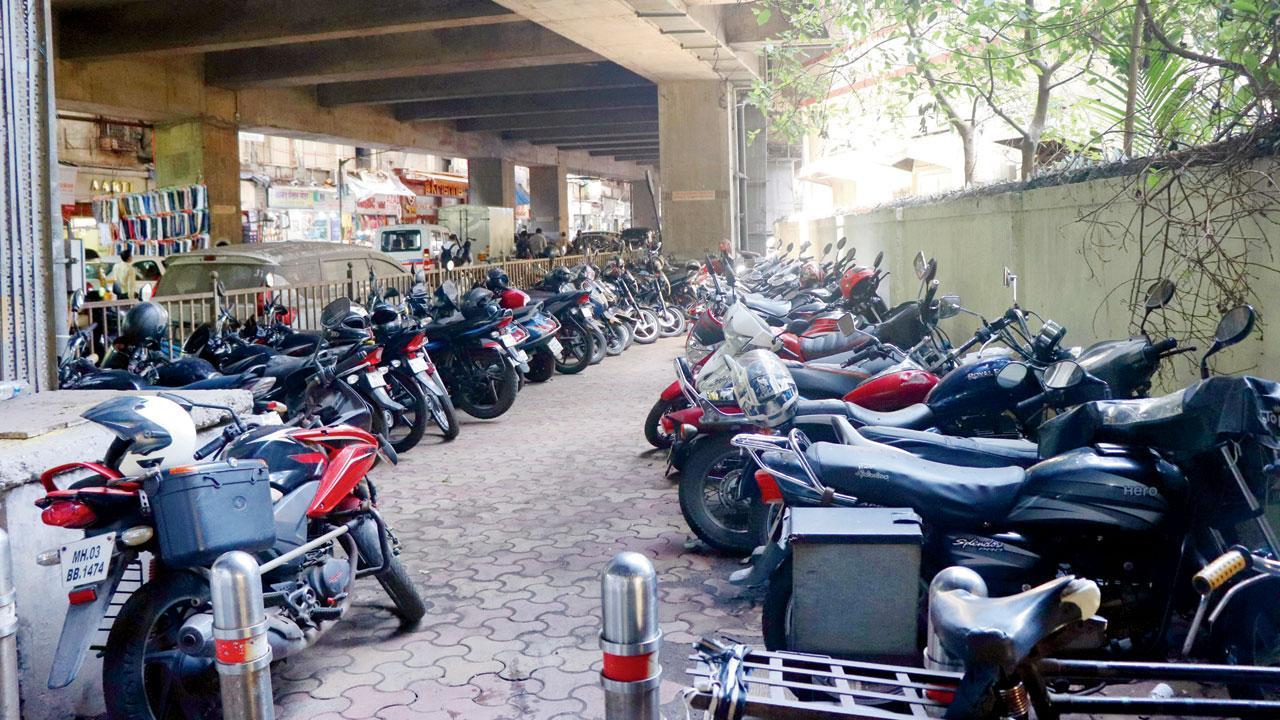 
Not just hawkers, but the space on Mumbai’s footpaths is also gobbled up by a host of entities—housing societies, commercial complexes, abandoned and parked vehicles, garages, eateries, and even city’s infrastructure projects—depriving pedestrians of the sidewalks. This brazen encroachment happens in almost all corners of the city’s suburbs. The third part of our series ‘Nowhere to go’ focuses on citizens’ plight due to this ‘free-for-all’ state of affairs. 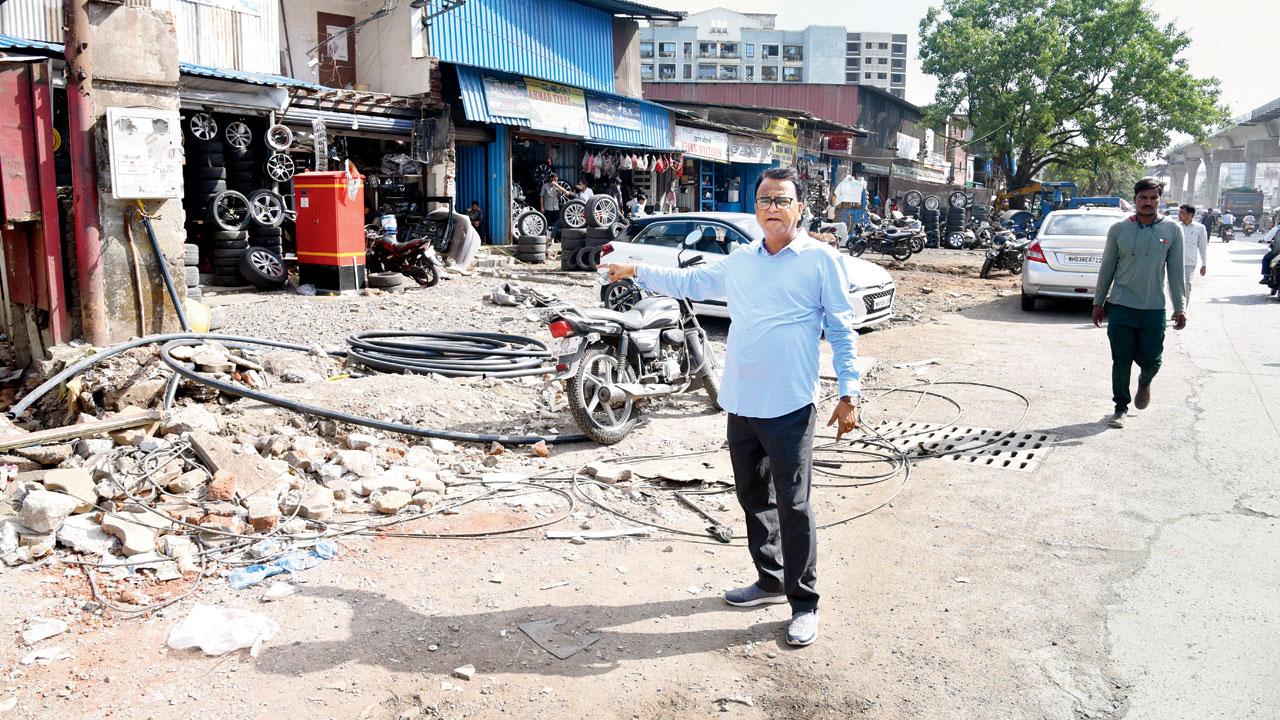 As part of its campaign to highlight the lack of pedestrian space in the city, mid-day visited a few pockets in the central as well as western suburbs. BMC spends about Rs 250 crore a year to maintain and beautify pavements. 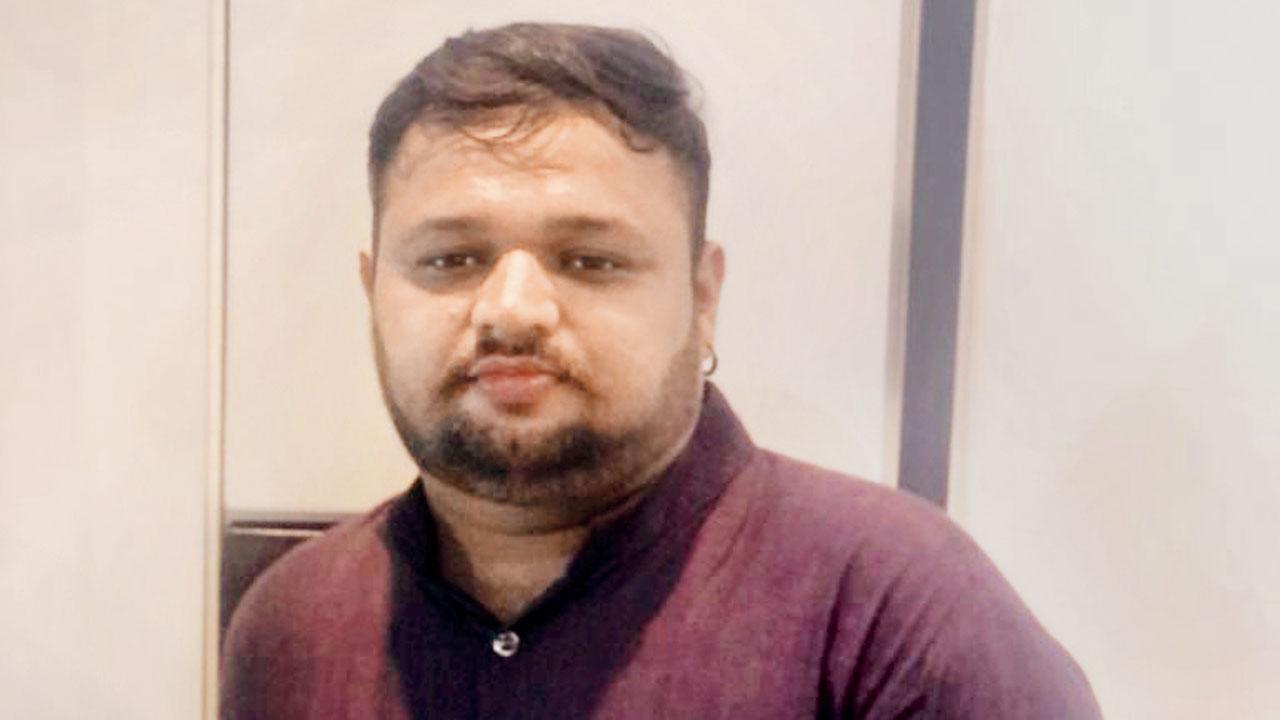 Mahavir Nagar at Kandivli West is popular for its eateries. While the food joints carry on with their brisk business daily, it costs pedestrians dearly. “These eateries cover half of the footpath and the rest is occupied by their customers. It’s tough to walk on the footpath here. Every time I notice this type of encroachment, I tweet and tag the BMC. Civic authorities take action but the encroachers return within a few days,” said Arun Gorule of Kandivli West. “On the west side of the Kandivali railway station, the footpath seems to be non-existent. One half of the space is taken over by shopkeepers and the other half by hawkers,” said Anand Ruparelia. He added, “Pedestrians even can’t think of walking on the road with children as it is very risky.” 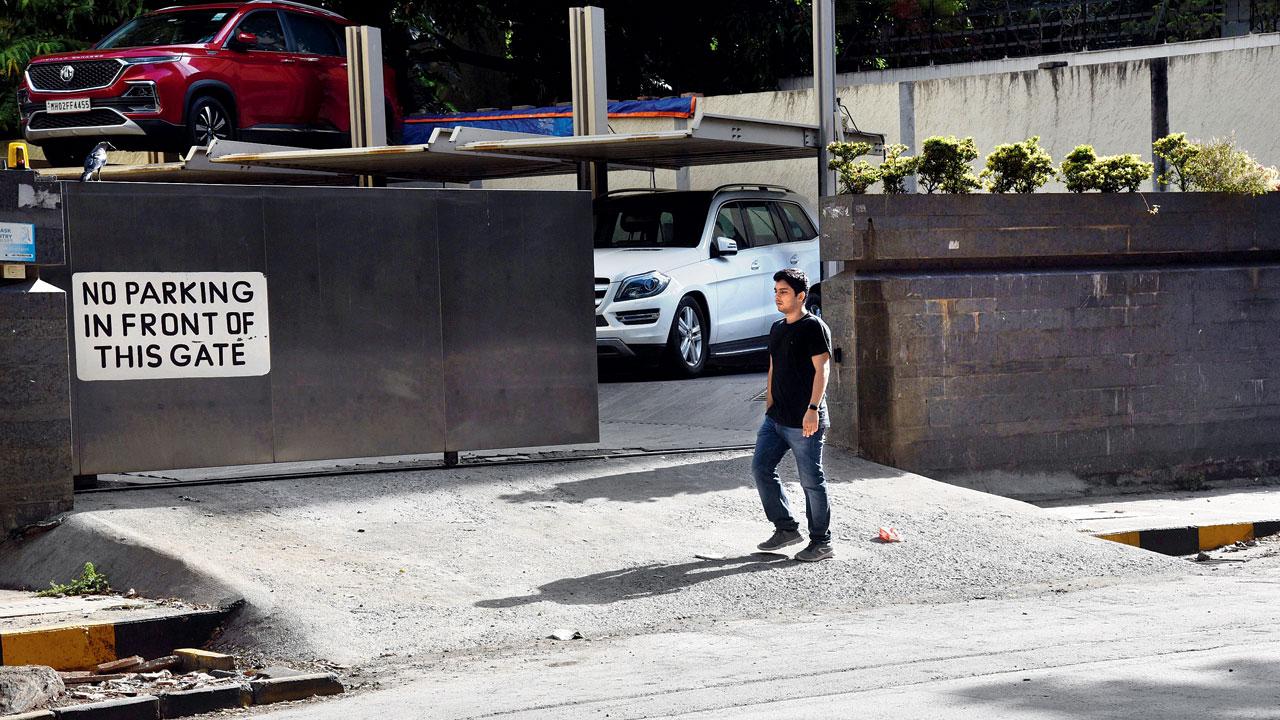 A ramp has been built on the footpath to facilitate vehicle movement on the 15th Road, Khar West. Pic/Sameer Markande

A lot of housing societies and office buildings have constructed ramp-like structures as per their convenience to facilitate the movement of vehicles to and from their premises, similar to this one at Khar. It doesn’t matter if they create hurdles for walkers, particularly the seniors. 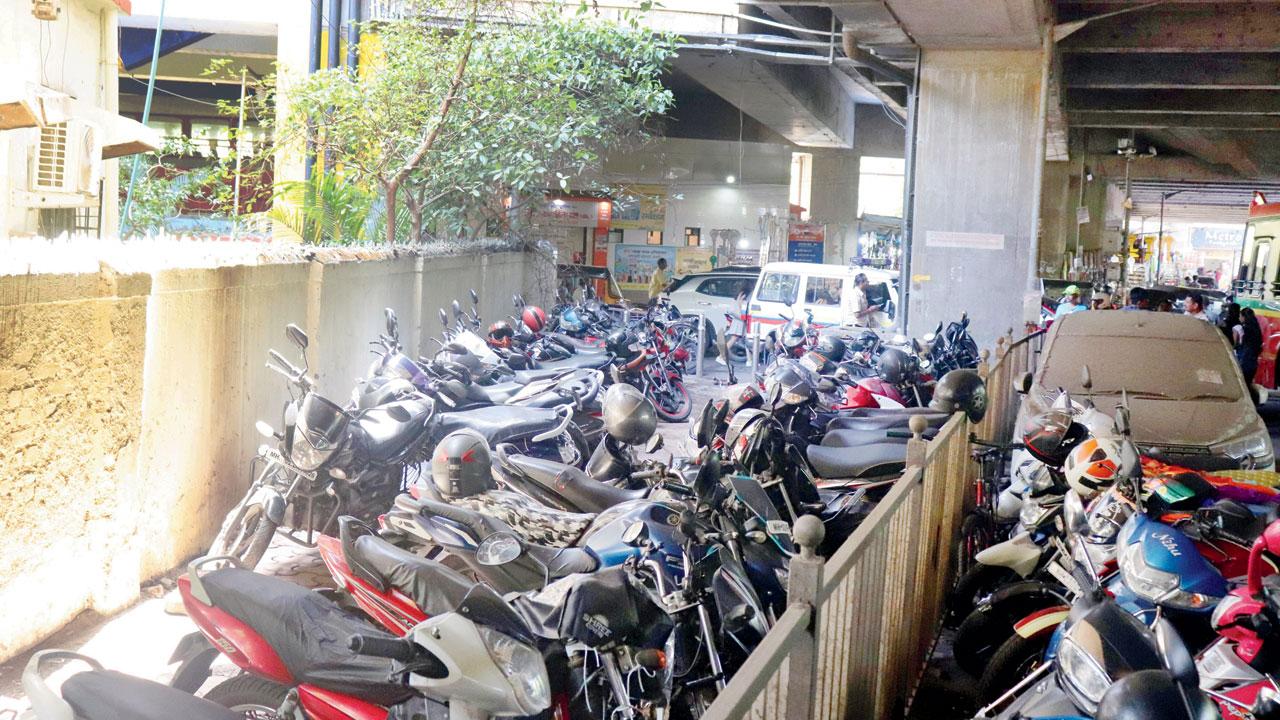 One of the most important east-west links, the Andheri-Kurla Road has industrial and commercial establishments along the carriageway. At Hanuman Nagar, Chakala, a slum pocket has expanded to the pavement, while Metro stations have also taken away footpath space. Below the Andheri Metro station, vehicles have been parked on pavements, leaving hardly any space for citizens to use the sidewalks. Rajashree Shahu Maharaj Road, which is the main approach road to the Andheri-Kurla Road, has no footpaths at all. mid-day came across many spots where shops have taken over the pavements by illegally extending their premises or stuffing the place with their wares. Despite complaints, nothing changes, said a local. 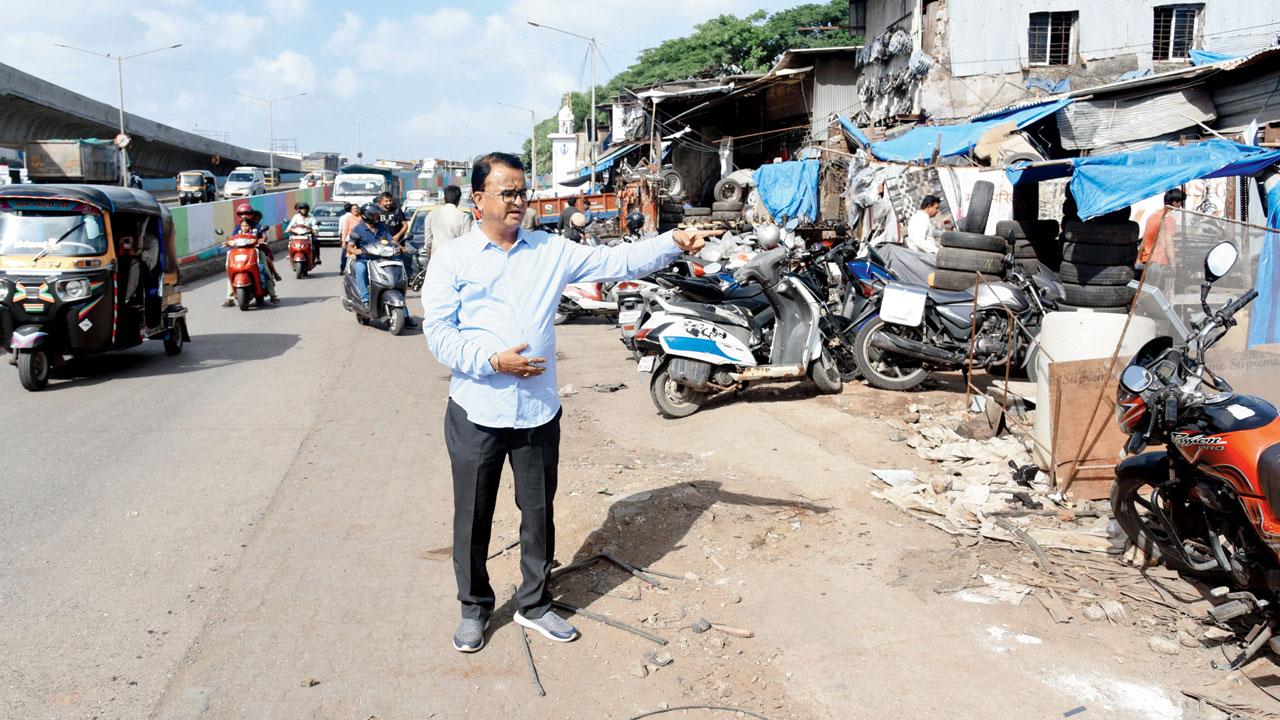 The sidewalk on the CST Road at Kurla has been completely taken over by scrap sellers. Pic/Sameer Markande

A hub for used car parts, the footpaths on the CST Road at Kurla West have been encroached by shops and scrap dealers. Locals say they are forced to negotiate through the busy road. Not just this stretch near Kurla station, but a major part of LBS Road faces the same problem. “Shopkeepers, godown owners not only encroach upon the footpath, they also damage the pathways, which forces us to walk on the road,” Kurla resident Ajay Shukla told mid-day.

‘As if they own them’ 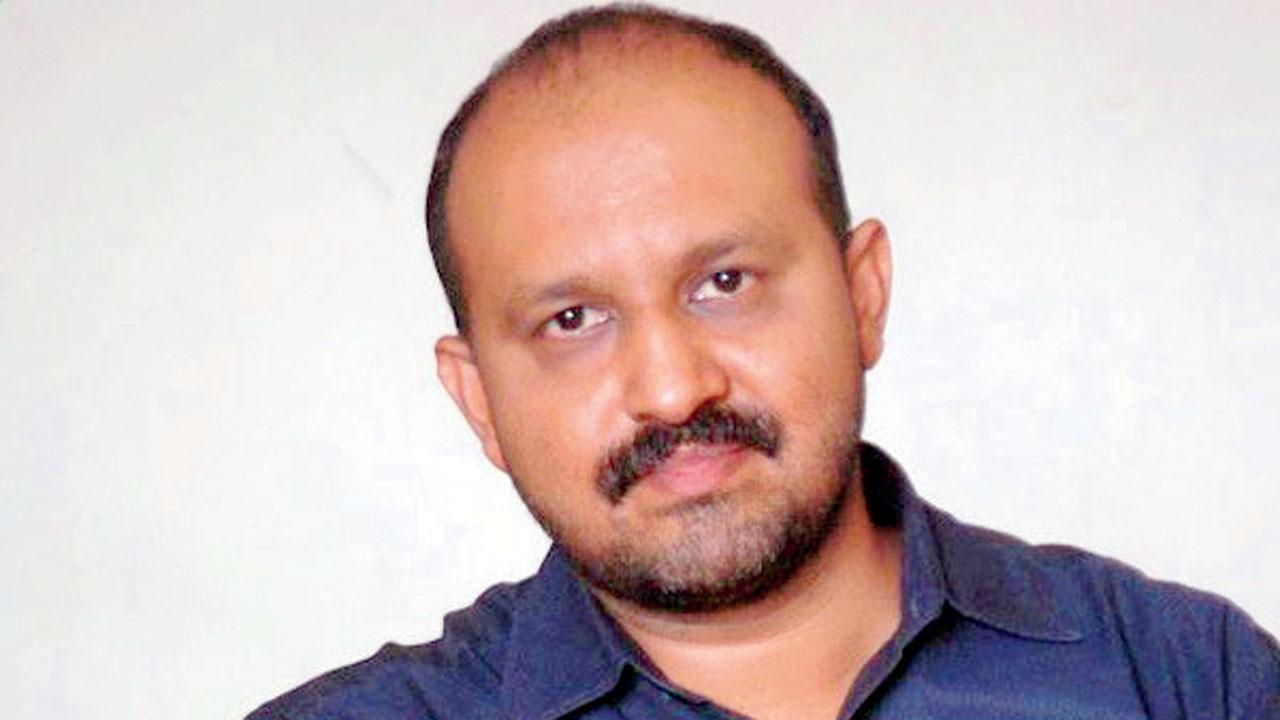 Pankaj Joshi, a town planning expert and the principal director of Urban Center Mumbai, said, “Shop owners and societies build ramps on pavements, while restaurants block the sidewalks by placing potted plants and beautifying them to keep hawkers at bay. With these, the walkway becomes private property. The establishments think they are the owners of the footpath.” Joshi said ramps on footpaths are mainly found in the suburbs where redevelopment of buildings is complicated. “If the plinth level of a building is higher, there is no option but to build a ramp. That’s why they should be planned properly. Another way to block footpaths is to use the cover of tree trunks. The sum total is that the walker has to take the road to avoid all this and it defeats the basic purpose for which the footpath was built,” he said. 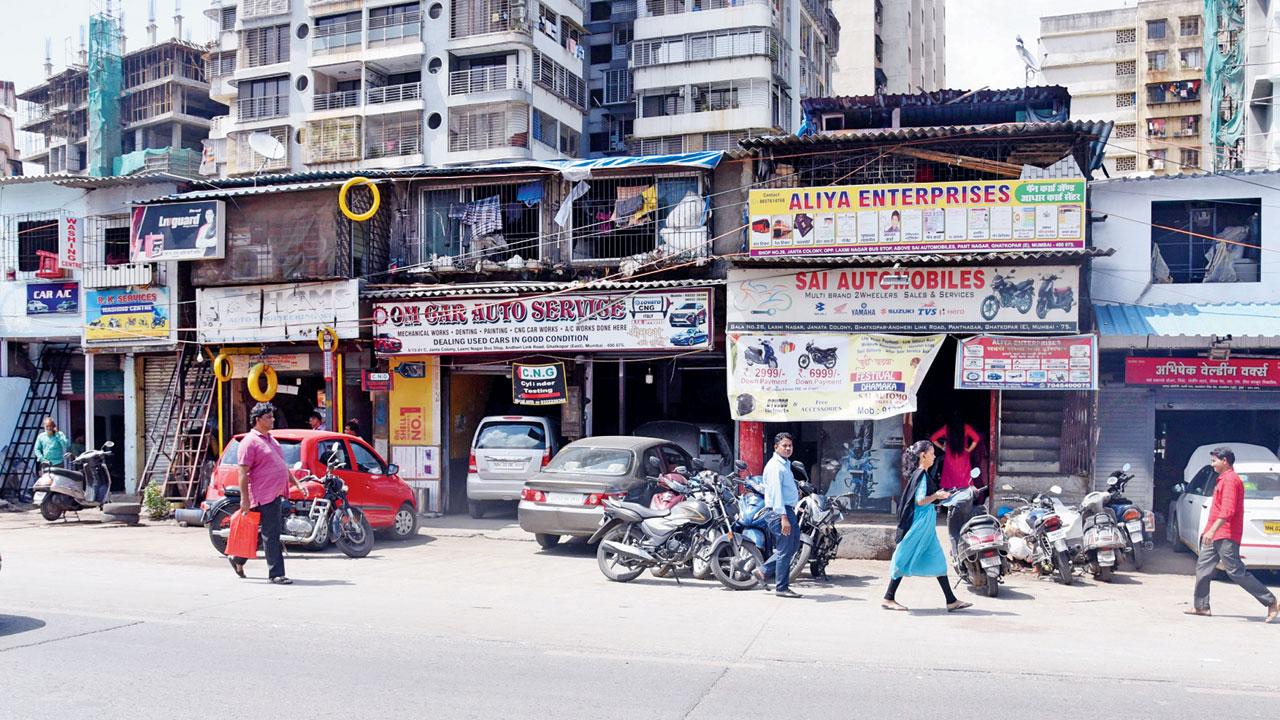 This stretch on Ghatkopar-Andheri Link Raod near Ghatkopar BEST depot has no footpath. Pic/Sameer Markande

This stretch of the Ghatkopar-Andheri Link Road has no pavements. “No footpath was ever built on the road near Ghatkopar BEST bus depot, Both sides of the road have been taken over by garage owners. Senior citizens and children can’t think of walking here. I never allow my parents to walk on this road,” said local resident Mangesh Lolge.

Next Story : Lakes supplying water to Mumbai now half full, enough for 5 months