Woman, children swept away in flooded drain in Santacruz 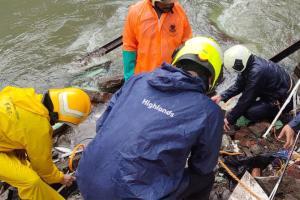 
In an untoward incident, a 35-year-old woman and her three children, aged between one to seven years, fell into a flooded nullah and were swept away after their house collapsed in Santacruz due to heavy rainfall in Mumbai. The Brihanmumbai Municipal Corporation (BMC) took to Twitter to inform about the incident and said the search operation is underway.

While a two-year-old girl was rescued and shifted to VN Desai Hospital, the National Disaster Response Force (NDRF) team recovered two bodies - a one-and-a-half-year-old girl and the woman. Search operations are underway to find another girl.

Fire Department received a message from Vakola, where 2 houses next to a nallah had collapsed

1 woman & 3 girls from one of the houses fell in the open nallah, out of which 1 girl has been rescued & shifted to VN Desai Hospital. Search operation is in progress#AtMumbaisService pic.twitter.com/xrZJBCmcT8

The incident took place at Vakola in Santacruz. The Mumbai Fire Brigade department received a message that two houses situated next to a nullah had collapsed. At around 11.30 am in the Dhobighat locality, the ground plus one-storey house attached to the nullah collapsed as extremely heavy rainfall lashed the city, an official from the fire brigade said.

#Mumbai: 1 female, 2 girls missing after they fell in an open drain, located at the backside of their room. 3 rooms of Trimurti Chawl in Santacruz East, collapsed today morning. Search operation underway. Another girl rescued by police and shifted to V N Desai hospital pic.twitter.com/T7SvACrgxV

Two fire engines, an ambulance, NDRF personnel, local police, and other rescue teams are at the spot.

In another incident, a 15-year-old boy was electrocuted near the Owala Hanuman Temple on Ghodbunder Road in Thane. The minor boy died on the spot when he came in contact with a live wire of a street-light pole.

Earlier in the day, a massive landslide on the Western Express Highway between Kandivali and Malad brought traffic to halt. No casualty was reported. After six JCBs were deployed by the BMC that managed to clear the debris and vehicular movement is running as normal.

BMC Commissioner Iqbal Singh Chahal said that Mumbai recorded a 230 mm rainfall within 10 hours of incessant rainfall. He further said that heavy rainfall created a flood-like situation in the city. "Over 163 pumps were being used to ease the inundation in different parts of the city," Chahal said.

Next Story : COVID-19 will disappear with blessings of Lord Ram: Shiv Sena