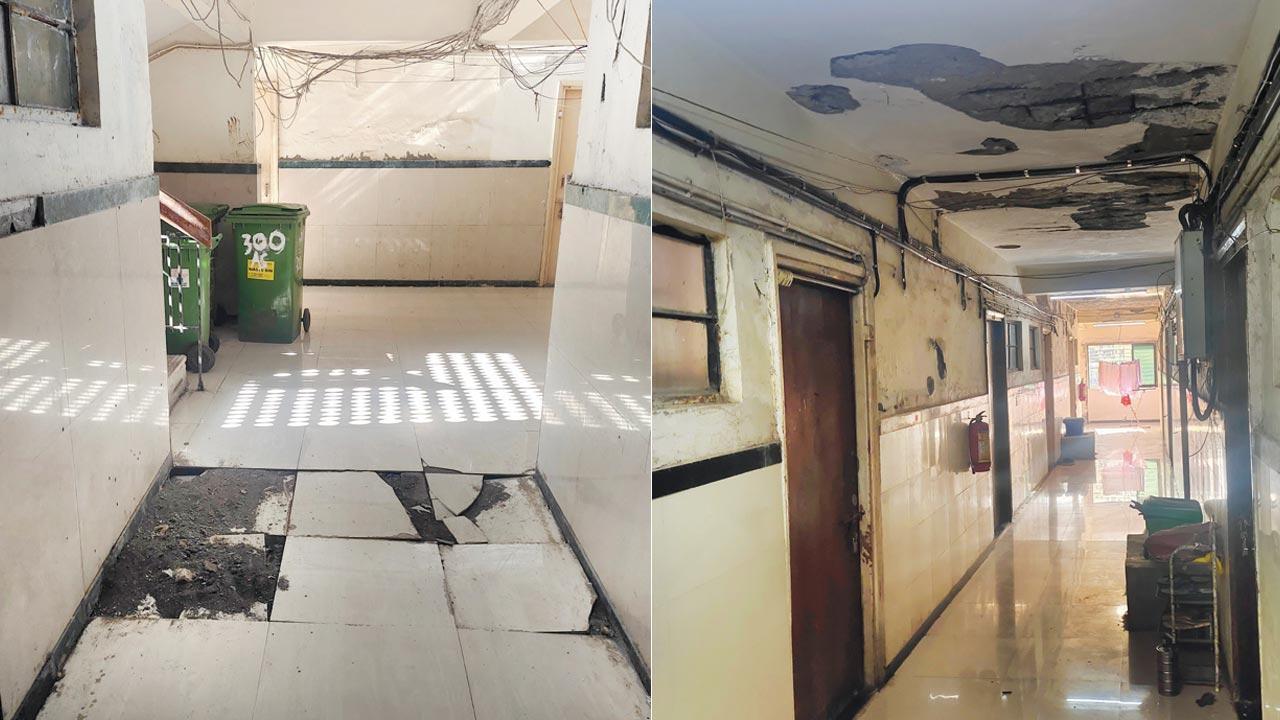 During the visit, mid-day found that chunks of plasters from the ceiling had fallen off in several parts of the hostel at Grant Medical College and Sir JJ Group of Hospitals; (right) broken floor tiles


Resident doctors at Grant Medical College and Sir JJ Group of Hospitals, one of the most prestigious medical colleges in the city, live in fear as the hostels are on the verge of collapse. mid-day accessed the premises and found out how the 500 postgraduate medicos live in the hostel despite reports of broken beams and staircases and leaking ceilings. The latest structural audit report also stated that there was a need for structural repair work.

Tiles on the floor and on the side wall have crumbled down. Chunks of plaster from ceiling had fallen off in many places, including rooms and lobbies. The doctors even erected plastic sheds inside the rooms to escape the leakage. 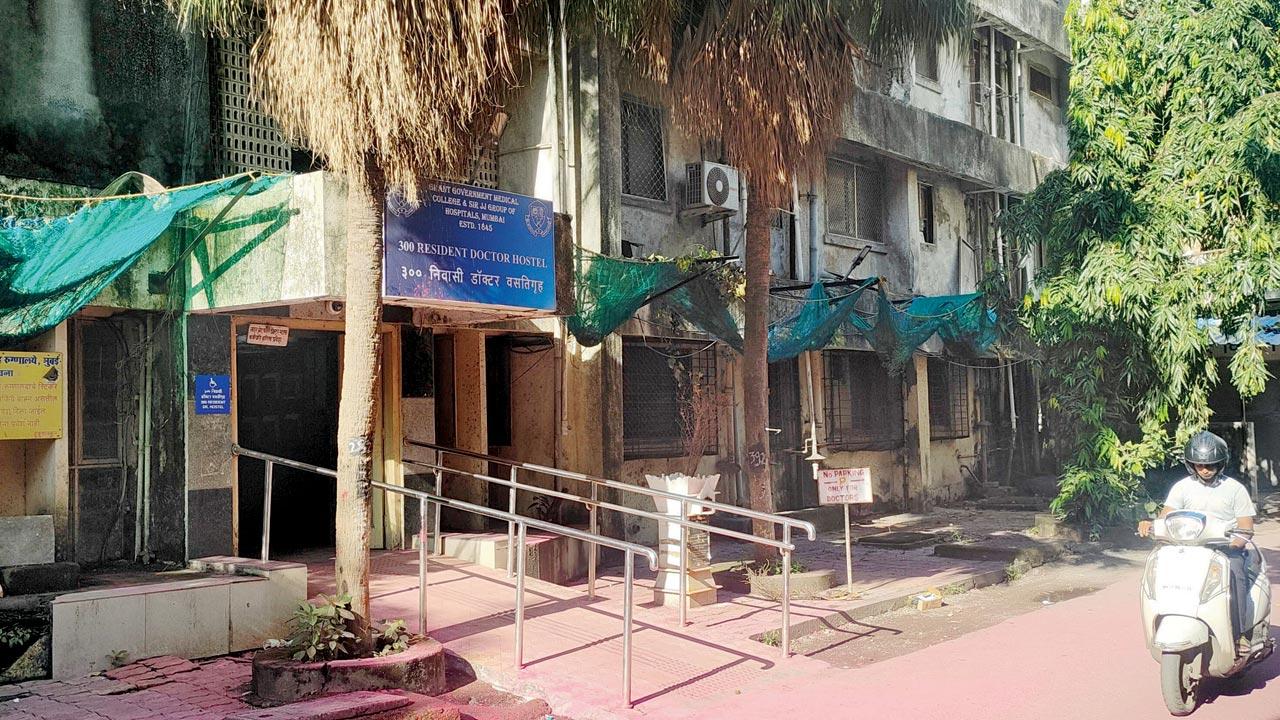 A senior resident doctor on the condition of anonymity said, “We have no other option but to stay here. You can see that a part of the ceiling had collapsed. Fortunately, we were on duty at that time, so nobody was harmed.”

“We live in misery. There is no floor, plasters are falling down. There are big cracks on pillars and iron rods, all rusted, are visible from the damaged wall. There is leakage issue too, which leads to fungal growth. Even the stairs are broken,” said another resident doctor. 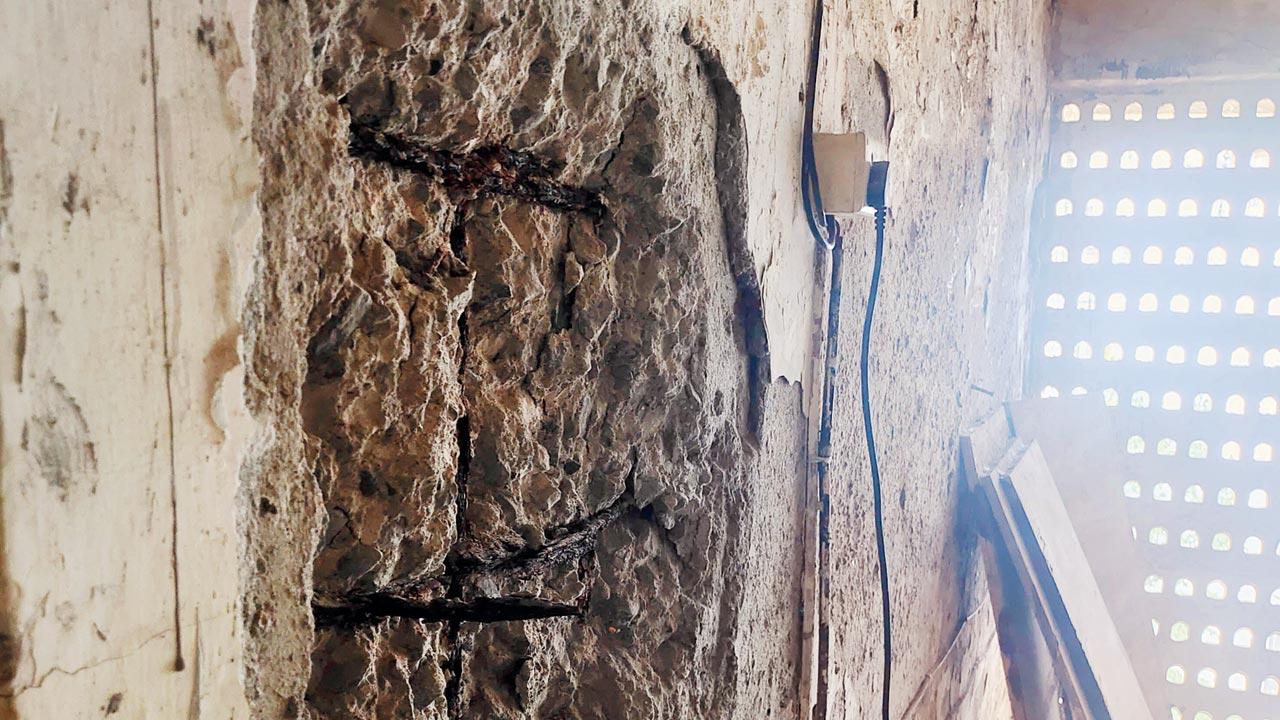 Plaster from the wall has fallen off, exposing the iron rods which are completely rusted

A representative from Maharashtra State Association of Resident Doctors (MARD) said, “We have informed the administration about the bad condition of the building many times. But no decisions are being taken by the government. They have applied nets all around the building because the outside structure is falling. Is the government waiting for any mishap to take place?”

A senior official from JJ hospital said, “The hostel was built around three decades ago to accommodate 200 medical students. Now around 500 resident doctors live in this 7-storey building. The student strength has increased to 1,000, and half of them are living in another hostel. The number of resident doctors will soon increase to 1,500, so we need to build another building.”

A senior official from the Public Works Department (PWD) said, “There was a building collapse in the area after which the BMC ordered a structural audit of all buildings. We asked Veermata Jijabai Technological Institute (VJTI) to do so. The report, which was submitted to us recently, says that the building is not dangerous but needs structural repair work. As per my knowledge, no structural repair work has been conducted here in the three decades.”

“A proposal for repairs was sent earlier, but it got rejected. A new proposal for structural repairs at a cost of Rs 24.5 crore has been sent by the hospital administration to the Medical Education Department. Of this, Rs 12 crore will be for hostel repairs,” an official added.

PWD engineer Vijay Patil, who looks after JJ hospital works, said, “The building is safe as per the structural audit report, so doctors need not to worry. We have started the internal repair work. As far as the structural repair of the building is concerned, a proposal of Rs 12.50 crore has been sent. Once the resolution is passed, the work will start.”

500
No. of resident doctors living in the hostel