Security scare at Mumbai airport after man jumps off plane, walks away

Experts raise serious questions about security procedures that were followed; airline staff allegedly did not inform security agencies until 3.40 pm, more than 35 minutes after 30-yr-old jumped off 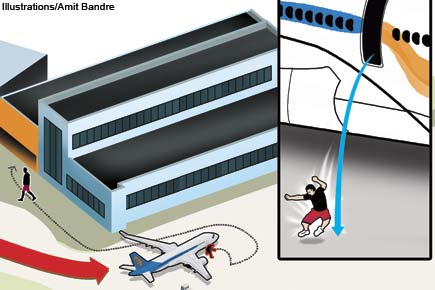 It is no secret that as soon as an aircraft’s wheels touch the tarmac, passengers begin to behave like prisoners would if a plane door was the only thing standing between them and freedom. 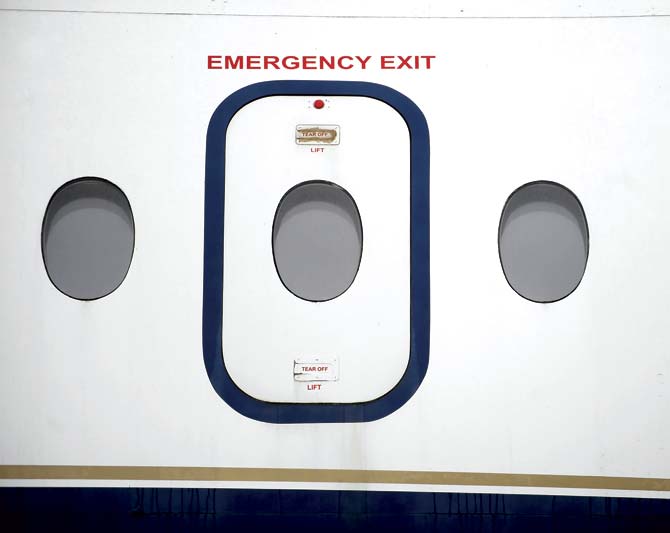 No sooner does the seat belt sign go off than people begin scrambling to grab their bags from the overhead bins in a bid to be the first to deplane. One Akash Jain, however, took that impatience to a whole new level last afternoon, exposing a flaw in the security procedures followed by the airline in the process. 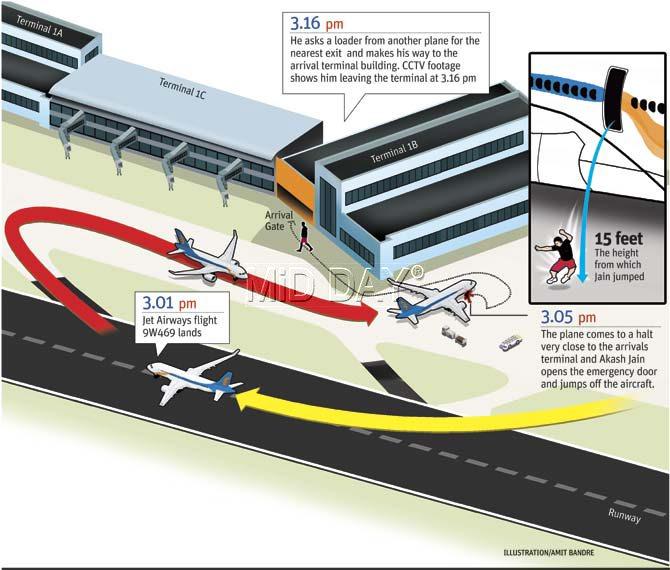 Jumper
Jet Airways’ Chandigarh-Mumbai flight 9W469 had scarcely come to a standstill just metres away from the arrival building at the domestic airport when Jain opened the emergency exit right in the middle of the aircraft, and jumped off.

Landing from a height of nearly 15 feet, the 30-year-old casually walked away even as the other passengers inside were left shell-shocked by what had just happened. Before anyone could do anything, he had made his way out of the airport, raising serious questions about the security procedures that were followed.

Blow-by-blow
The plane, a Boeing 737 flight with 144 passengers and 5 crew members onboard, was scheduled to land at 3.15 pm yesterday. It landed safely at the airport at 3.01 pm, however, and left the runway to halt at parking bay 1, which is barely a few metres from the arrivals building of Terminal 1B at 3.05 pm.

As soon as the aircraft came to a standstill, Jain, whose seat number was 20F, opened the emergency door and jumped down in the apron area. Sources said the shocked passengers raised their voices to inform the crew, but by the time the crew reached the emergency exit, Jain had already walked away.

He walked a few meters and then asked a loader from another flight where the closest exit point was. He was pointed to the arrival terminal, which was around 20 metres from the aircraft. Closed Circuit Television (CCTV) footage showed Jain, in black t-shirt and brown shorts, leaving the terminal at 3.16pm.

Serious breach
To further escalate the security breach, officials said the Jet security staff informed the security agencies at the domestic terminal about the incident only around 3.40pm.

An airport official said that it took Jain around five minutes to enter the terminal building after jumping off the aircraft. “If the incident took place after the aircraft landed, why didn’t the airline security staff inform the security agencies immediately? Why did they need 35 minutes to do so?

The passenger took 10 minutes to leave the terminal premises and the scenario would have been completely different had the local police and security agencies at the airport been informed immediately,” he said.

“Without being informed, the security agencies had no reason to think that Jain was not just another passenger and prevent him from entering the arrivals building from the air side,” he added.