Prime Minister Narendra Modi to interact with farmers on December 25

The BJP will also hold "kisan samvad" at over 2,500 places in Uttar Pradesh 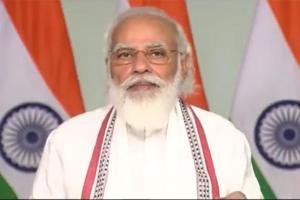 
Prime Minister Narendra Modi will interact with farmers on the birth anniversary of former PM Atal Bihari Vajpayee on December 25, the BJP said, adding that the party will hold "kisan samvad" at over 2,500 places in Uttar Pradesh.

In a statement issued on Saturday, the party said it has intensified its preparations for it.

UP BJP chief Swatantra Dev Singh and party leader Radha Mohan Singh held a virtual meeting in this regard with party office-bearers from parts of the state. Radha Mohan Singh said the Narendra Modi-led government is dedicated to welfare of the poor and farmers.

"Had the amount of welfare done by the Modi Government been done in the past, the condition of farmers would have been better," Singh said.

He accused the opposition parties of spreading lies regarding the new farm laws.