People from different sections of society including a differently-abled man, Manohar, also joined the foot march and Gandhi was seen pushing his wheelchair to some distance 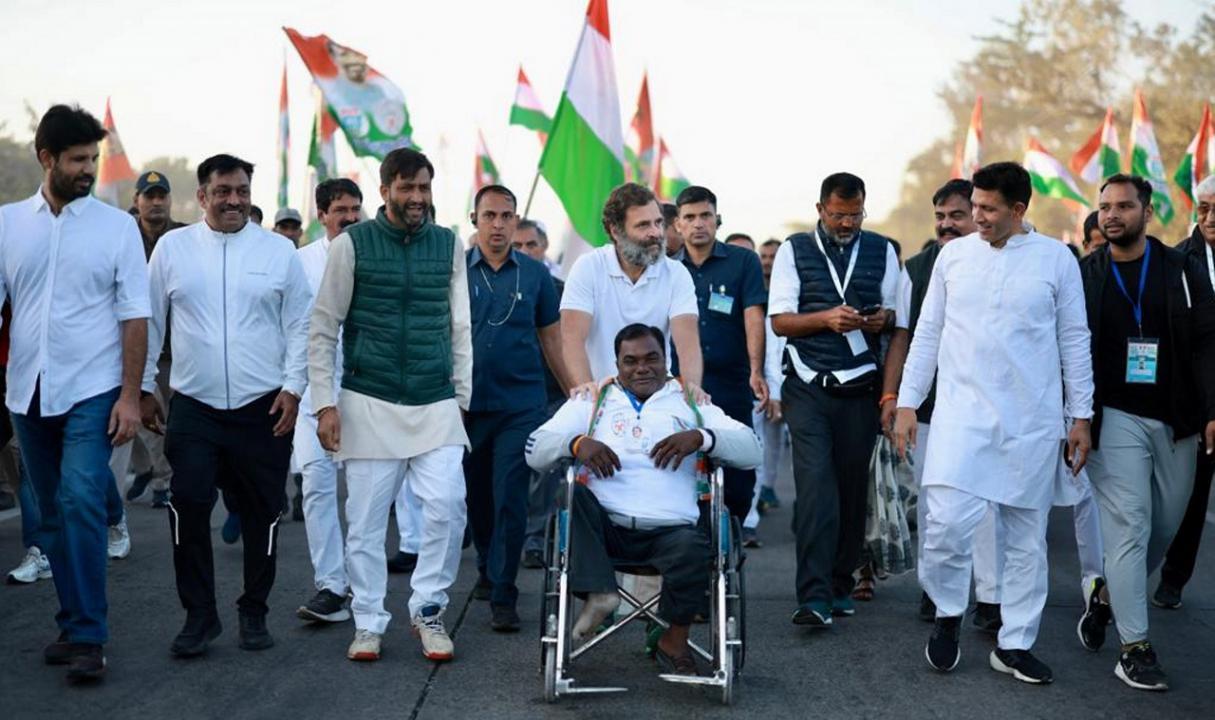 Congress leader Rahul Gandhi with a wheelchair-bound supporter during the Bharat Jodo Yatra, in Gwalior. Pic/PTI


The Bharat Jodo Yatra led by Congress leader Rahul Gandhi reached Indore on Sunday on the fifth day of its Madhya Pradesh leg.

People from different sections of society including a differently-abled man, Manohar, also joined the foot march and Gandhi was seen pushing his wheelchair to some distance.

The man said he told Gandhi that the country now needs a change.

After a night halt at Mhow, the birthplace of Dr B R Ambedkar, the yatra participants resumed the march on Sunday morning.

The yatra passed through the suburban area of Rau and reached Indore. A red carpet was rolled out to welcome when the march reached Rau.

Indore Commissioner of Police H C Mishra said 1,400 personnel have been deployed in the city to provide security to the yatra and barricades have been put up at various places.

Twelve dilapidated houses in the densely populated Rajwada area with narrow streets have been temporarily evacuated to avoid the possibility of any untoward incident during the march, he said.

Earlier, a sweet shop in Juni area of Indore received an anonymous letter by post on November 17, threatening bomb blasts in Indore city during the yatra.

The letter, which referred to the 1984 anti-Sikh riots, had also threatened assassinations of Rahul Gandhi and MP Congress chief Kamal Nath. The police had arrested a person in this connection.

The Congress's Bharat Jodo Yatra, a mass contact initiative, will take a night halt at Chimanbagh Ground in the city, officials said.

As per the initial plan of the Congress, Gandhi and other yatra participants were to be accommodated at the city's Khalsa Stadium. But the plan could not materialise following a controversy.

A row had erupted after Kamal Nath, facing allegations in connection with the 1984 anti-Sikh riots, was felicitated by organisers at a Sikh religious event held at Khalsa College in Indore on November 8.

After Nath left the venue, famous kirtan singer Manpreet Singh Kanpuri had lashed out at the organisers for inviting the Congress leader.