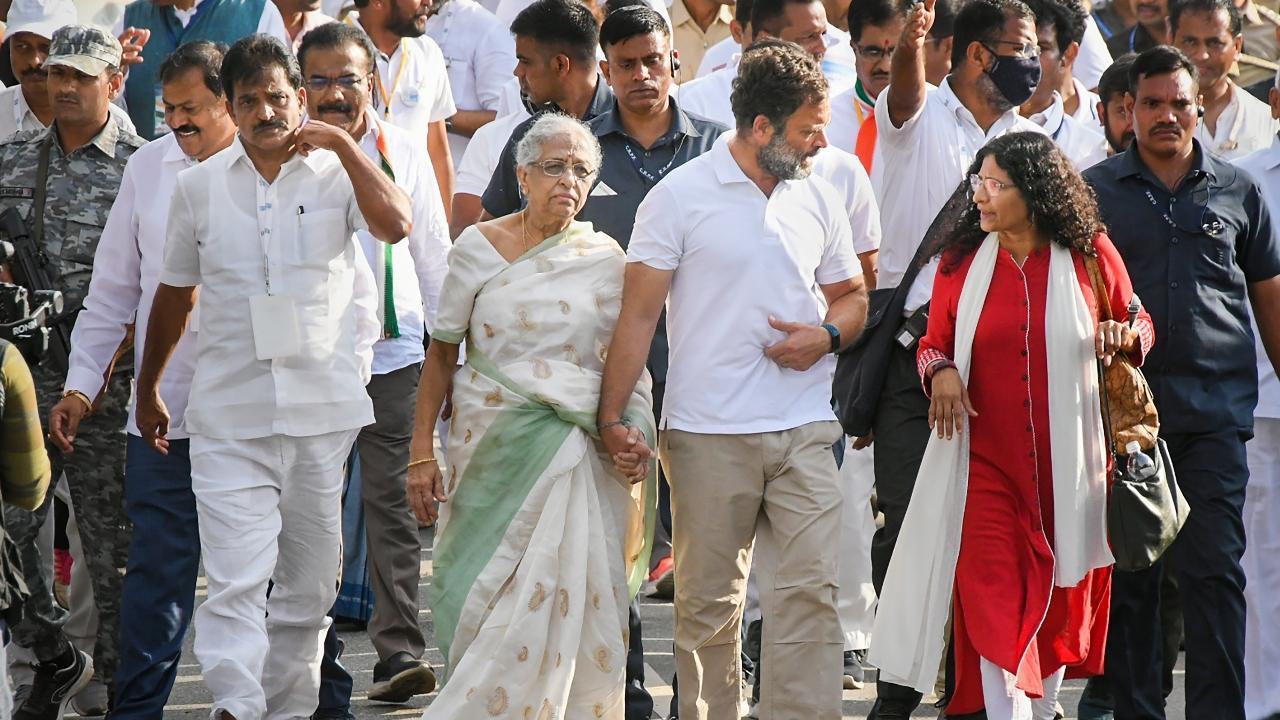 
Family members of journalist and activist Gauri Lankesh, who was murdered in 2017, joined Congress' Bharat Jodo Yatra led by Rahul Gandhi on Friday.

Indira Lankesh and Kavitha Lankesh - mother and sister of journalist walked with Congress leader Rahul Gandhi as they participated in the party's march.

Senior journalist and activist Gauri Lankesh was shot dead at her residence in Bengaluru's Rajarajeshwari Naga on September 5, 2017.

Lankesh was the editor of the Gauri Lankesh Patrike, a magazine described as an 'anti-establishment' publication.

In November 2016, she was convicted of defamation and was sentenced to six months in jail, after she ran a piece in 2008 that Prahlad Joshi, a BJP MP from Dharwad, and Umesh Dushi, also of the BJP, found objectionable. However, the court also granted her bail and allowed her to appeal to a higher court.

Meanwhile, taking to Twitter, Rahul Gandhi shared a picture of the march with Gauri Lankesh's mother and sister and said that he stands with Gauri Lankesh and countless others like her, who represent the true spirit of India.

As the Bharat Jodo Yatra entered its 30th day on Friday, Congress MP Rahul Gandhi and party workers resumed the padayatra from K Malenahalli in Mandya in Karnataka.

The padayatra will be concluded today at Adhichunchanagiri Matha Stadium.

On Thursday Sonia Gandhi joined the Party Padyatra in Mandya district of Karnataka.

"We've sailed through storms in the past. Today, too, we will break the limits of all challenges and will together unite India," Rahul tweeted and posted a photograph of him walking with his mother, his arm around her.

Rahul Gandhi is currently leading Bharat Jodo Yatra- the 3,500-km march from Kanyakumari to Kashmir, covering as many as 12 states. The Padyatra (march) will cover a distance of 25 km every day.

The Padyatra (march) is covering a distance of 25 km every day. The march was aimed to cover as many as 12 states in five months. It will be in Karnataka for 21 days before moving north.

According to Congress, the 'Bharat Jodo Yatra' is being held to combat the divisive politics of the BJP-led Centre and to awaken the people of the country to the dangers of economic inequalities, social polarisation and political centralisation.

Notably, all the party MPs, leaders and workers along with Rahul Gandhi are staying in containers. Sleeping beds, toilets and ACs are also installed in some of the containers. During the journey, the temperature and environment will differ in many areas. The arrangements have been made keeping in view the intense heat and humidity with the change of places.

The Congress suffered a debacle in the assembly polls held earlier this year and the Yatra is seen as an attempt to rally the party rank and file for the upcoming electoral battles.