The newly-launched Mumbai Central-Gandhinagar Vande Bharat train had hit the herd of buffaloes around 11.15 am on Thursday near Ahmedabad, when the train was on its way to Gandhinagar. Four buffaloes were killed in the incident, the officials said 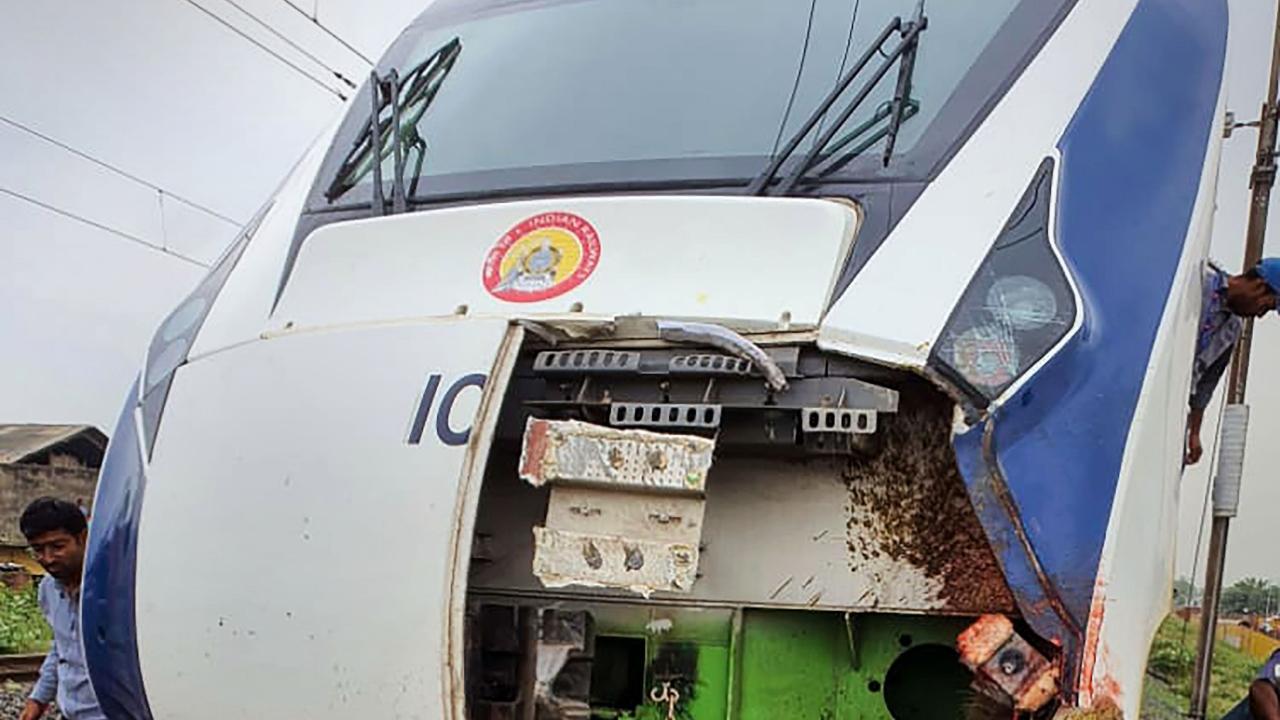 
The Railway Protection Force (RPF) in Gujarat has registered a case against the owners of buffaloes that were hit by the Mumbai-Gandhinagar Vande Bharat express, in which the front portion of the train was damaged, officials said on Friday.

The nose cone cover of the driver coach of the semi-high speed train, which got damaged after hitting the buffaloes, was replaced with a new one in Mumbai, the Western Railway (WR) said in a statement.

The newly-launched Mumbai Central-Gandhinagar Vande Bharat train had hit the herd of buffaloes around 11.15 am on Thursday near Ahmedabad, when the train was on its way to Gandhinagar. Four buffaloes were killed in the incident, the officials said.

"The RPF has lodged a first information report (FIR) against the unidentified owners of the buffaloes that came in the way of Vande Bharat train between Vatva and Maninagar railway stations in Ahmedabad," WR's senior spokesperson (Ahmedabad division) Jitendra Kumar Jayant said.

RPF inspector Pradeep Sharma posted at Vatva railway station said the FIR was filed under section 147 of the Railways Act, 1989, which deals with unauthorised entry into any part of a railway and misuse of its property.

"The FIR was registered on Thursday evening in connection with the incident in which four buffaloes were killed," he said.

The railway police have not yet been able to identify the owners of the buffaloes so far and efforts are on to do so, he said.

The incident had occurred in Punitnagar area near Vatva railway station on the outskirts of Ahmedabad city, Sharma added.

The train's damaged nose cone cover made up of FRP (fibre-reinforced plastic) was replaced with a new one in Mumbai, the WR said in a statement.

"The nose cone cover of the train's driver coach along with its mounting brackets was damaged in the cattle-hit incident. However, the vital parts of the train remained unaffected. The damaged nose cone was replaced at the Coach Care Centre in Mumbai Central," WR's chief public relations officer Sumit Thakur said.

After the incident on Thursday, the train had covered the distance to Gandhinagar Capital station and back to Mumbai Central without the nose cover panel as there was no damage to it train's vital parts, he said.

"The nose cover is designed to absorb the impact without transmitting the same to the functional parts of the train. Therefore, it is sacrificial by design and hence replaceable," Thakur added.

"The damaged nose cone was replaced in no time and the train was put back to service without any extra down time. The train departed from Mumbai today without any inconvenience to the passengers," he said.

According to the official, the Western Railway is taking all necessary measures to prevent such incidents in future.

The indigenously designed and manufactured semi-high speed train, the third service under the Vande Bharat series, was flagged off by Prime Minister Narendra Modi on September 30 from Gandhinagar Capital and it started the commercial run from the next day.