The first five of a batch of French Rafale fighter jets landed at Ambala airbase in Haryana on Wednesday, after covering a distance of nearly 7,000 km to join the Indian Air Force fleet 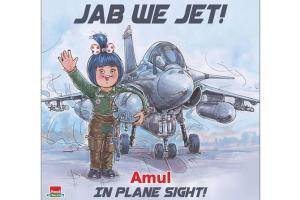 
As the first batch of the French Rafale fighter jets landed at Ambala airbase in Haryana, citizens across the country found it hard to contain their excitement. While Twitter was flooded with numerous posts, Amul's latest doodle to welcome the Rafale fighter jets won many hearts.

Amul's new doodle featuring its iconic girl welcomed the Rafale fighter jets in its own unique style. In the doodle, the Amul girl can be seen posing in front of the Rafale jet with a witty caption that read, "Jab We Jet."

The first five of a batch of French Rafale fighter jets landed at Ambala airbase in Haryana on Wednesday, after covering a distance of nearly 7,000 km to join the Indian Air Force fleet. Water salute was given to the five Rafale fighter aircraft.

While sharing the doodle, Amul wrote, "Amul Topical: First batch of Rafale jets arrive..." Since being shared, the tweet has garnered over 20,000 likes and nearly 4,000 retweets. Taking to the comments section one user wrote, "Oh !!  Amul, you never fail to brighten our faces !!", while another comment read, "I LOVE YOU AMUL. You are a true Patriot."

Here are some of the reactions:

I LOVE YOU AMUL. You are a true PatriotâÂÂÂu00c2u009d¤

People are in Awe for every doodle released...

salute to Amul creative team ...so bang on every time

Always look to Amul for some wonderful advertisements

Taking to Twitter, the Indian Air Force welcomed the jets by sharing pictures of the Rafales in "Arrow formation".

The jets will be part of the No. 17 Squadron of the Air Force, also known as the ''Golden Arrows'. After their landing, pilots led by Group Captain Harkirat Singh would meet the IAF chief to brief him about their flying and training experience in France. The formal induction ceremony of the aircraft would be held later.