Organisers Akhil Bharatiya Hindu Mahasabha, however, claimed that it was a 'coincidence' that the Mahishasur idol, which had a bald head and was dressed in a white dhoti and round glasses, bore resemblance to Gandhi, but social media was not convinced 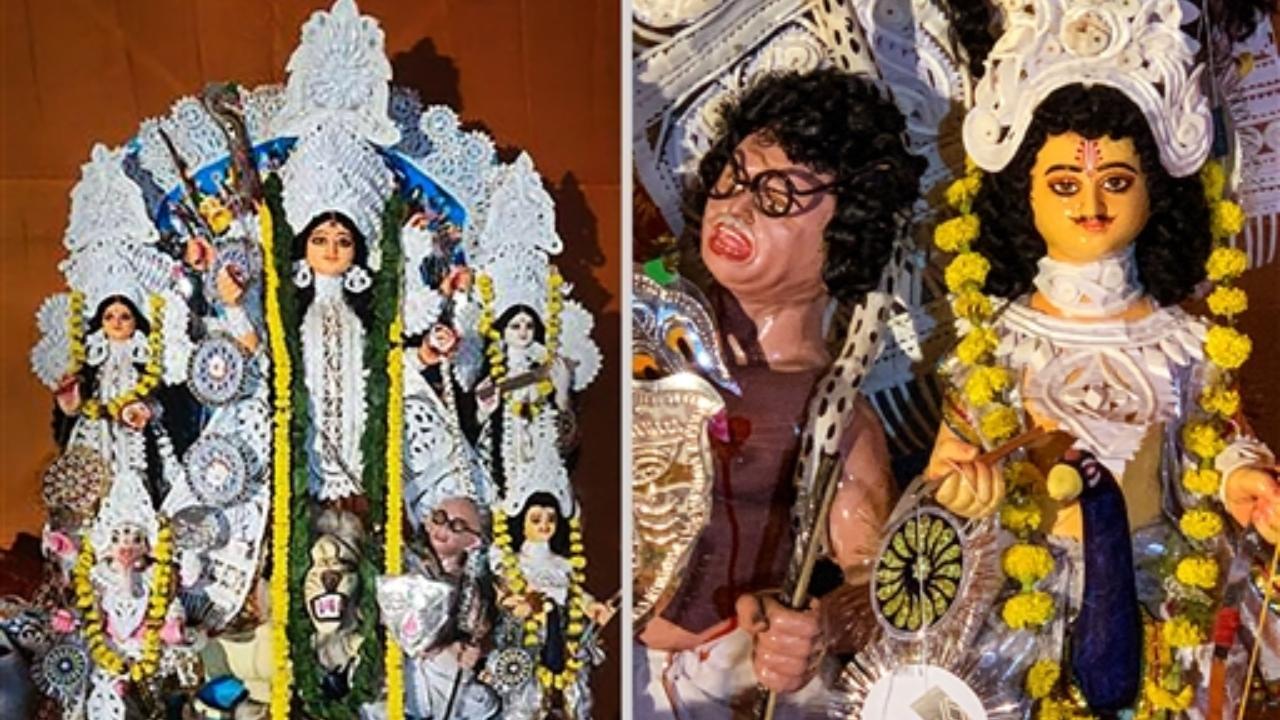 In this combo photo, a Durga idol in which the 'Mahisasura' was replaced by a Mahatma Gandhi-look alike (left) created controversy on the birth anniversary of the father of the nation, Sunday, Oct. 2, 2022. Akhil Bharatiya Hindu Mahasabha, organisers of the puja, changed the appearance of the idol (left) following instructions from the police after a complaint was lodged. Pic/PTI


Outraged over the installation of a Mahishasur idol that resembled Mahatma Gandhi at a pandal in southwest Kolkata, people on social media sought immediate arrest of Hindu Mahasabha leaders who organised the Durga Puja.

Organisers Akhil Bharatiya Hindu Mahasabha, however, claimed that it was a "coincidence" that the Mahishasur idol, which had a bald head and was dressed in a white dhoti and round glasses, bore resemblance to Gandhi, but social media was not convinced.

As the photos of the Durga Puja pandal went viral on social media, the Kolkata Police told the Mahasabha to change the look of the idol and also asked journalist Indradeep Bhattacharyya, who shared it on Twitter, to delete the photograph as it "may create tension" amid the festival.

"The Hindu Mahasabha claimed to have changed the idol on Kolkata Police's request and 'put moustache and hair' on it. What an easy solution found by KP," tweeted Ujjaini.

Priyanka Chaturvedi of Shiv Sena alleged that this was a "deliberate attempt" to demonise freedom fighters.

"Nope, this isn't coincidence. This is a deliberate attempt to change the narrative to suit the current narrative of demonising our freedom movement heroes. We have truly lost our moral compass as a nation," Chaturvedi tweeted.

One Partha Pratim Bhattacharya on Facebook urged the police to take action against the organisers of the Durga Puja as the idol "has hurt the religious sentiments of many Hindus like me".

"I don't have an inkling as to what steps the law enforcement people are taking to curb this nuisance. It's a shame for us, Indians and Bengalis is particular," Kumar Mukherjee posted on Facebook.

"It's such a disgrace to my city!" posted Dwaipayan Banerjee.

According to mythology, Goddess Durga slew Mahishasur in an epic battle to end his evil reign.

"The Durga idol that was worshipped here initially had a Mahisasur whose face looked similar to that of Mahatma Gandhi. The similarities are just a coincidence. After photos of it went viral, a police team visited the pandal and asked us to make changes to the face," he said.