A Reuters report says India is keen to boost trade in this way, but some firms are reluctant over fears of sanctions 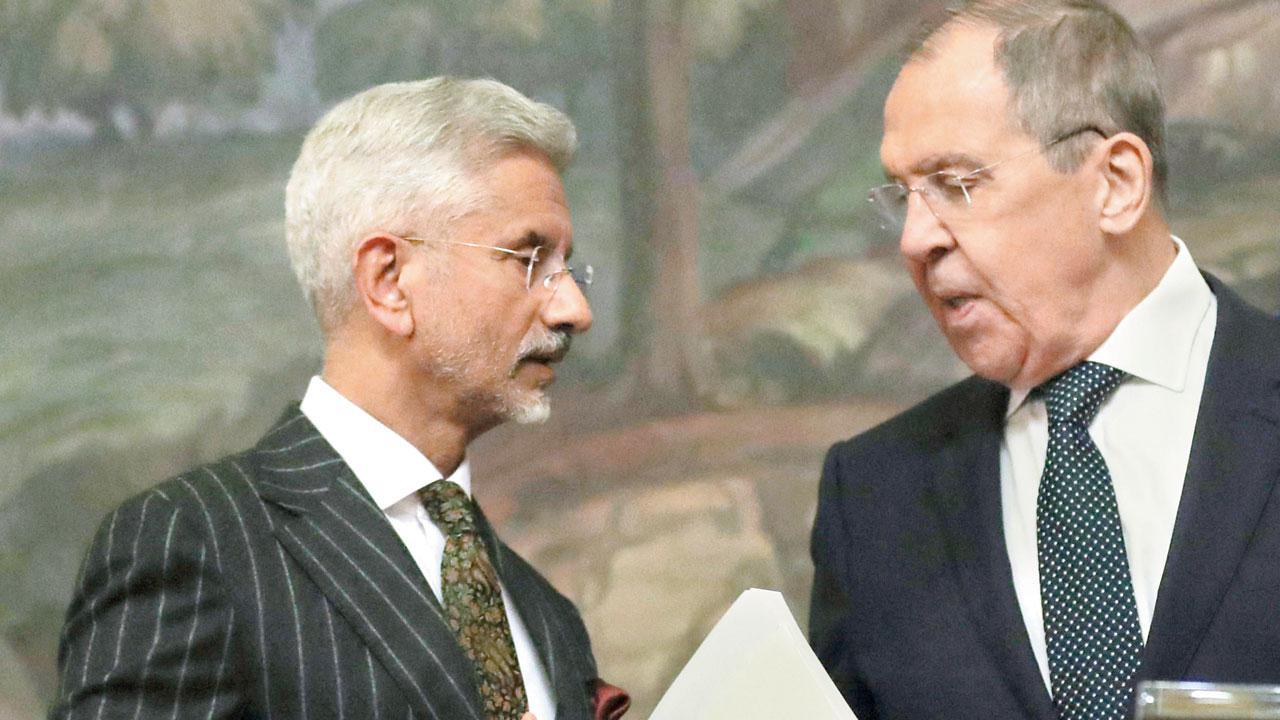 The requests were made weeks before Foreign Minister S Jaishankar’s visit to Moscow early November, when he met his Russian counterpart (right) Sergei Lavrov. File Pic/AFP


Moscow has sent India a list of more than 500 products for potential delivery including parts for cars, aircraft and trains, four sources familiar with the matter said, as sanctions squeeze Russia’s ability to keep vital industries running.

The list, a version of which has been seen by Reuters in New Delhi, is provisional and it is unclear how many of the items will eventually be exported and in what quantity, but an Indian government source said the request was unusual in its scope.

India is keen to boost trade in this way, said the source, as it tries to narrow a ballooning trade deficit with Russia. Some companies have expressed concern, however, about potentially falling foul of Western sanctions.

Indian imports from Russia have grown nearly five times to $29 billion between Feb. 24 and Nov. 20 compared with $6 billion in the same period a year ago. Exports, meanwhile, have fallen to $1.9 billion from $2.4 billion, the source said. India is hoping to boost its exports to nearly $10 billion over coming months with Russia’s list of requests, according to the government source.

An industry source in Moscow, who declined to be named because of the sensitivity of the issue, said Russia’s Ministry of Industry and Trade asked large companies to supply lists of raw materials and equipment they needed. The source added that further discussion would be needed to agree specifications and volumes and that the outreach was not limited to India.

Russia’s Ministry of Industry and Trade, and the Indian foreign and commerce ministries and the prime minister’s office did not immediately respond to requests for comment. Russia’s requests were made weeks ahead of Indian Foreign Minister Subrahmanyam Jaishankar’s visit to Moscow starting Nov. 7, two of the Indian sources said. It was not immediately clear what was conveyed by New Delhi to Russia during the visit.

Western sanctions have crippled supplies of some crucial products in Russia. Airlines are experiencing an acute shortage of parts because almost all planes are foreign-made. Car parts are also in demand, with global automakers having left the market. A source in Russia’s car sales industry said the trade ministry had sent a list of car parts needed to corresponding ministries and state agencies in other countries, including India.

But some Indian companies are reluctant to export to Russia over fears of being sanctioned by the West, the lack of clarity over payments and challenges to securing insurance.

“There is hesitancy among exporters...particularly on sanctioned items,” said Ajay Sahai, director general of the Federation of Indian Export Organisations (FIEO), a body supported by India’s commerce ministry.

Sahai, who is aware of Russia’s request, said even small- and medium-sized exporters who could meet some of the requests and had previously exported to Iran after Western sanctions, were not enthusiastic. Large Indian lenders are also reluctant to process direct rupee trade transactions with Russia, months after the mechanism was put in place, for fear of being sanctioned.

Some of the items Russia wants