An urban vision beyond Mumbai 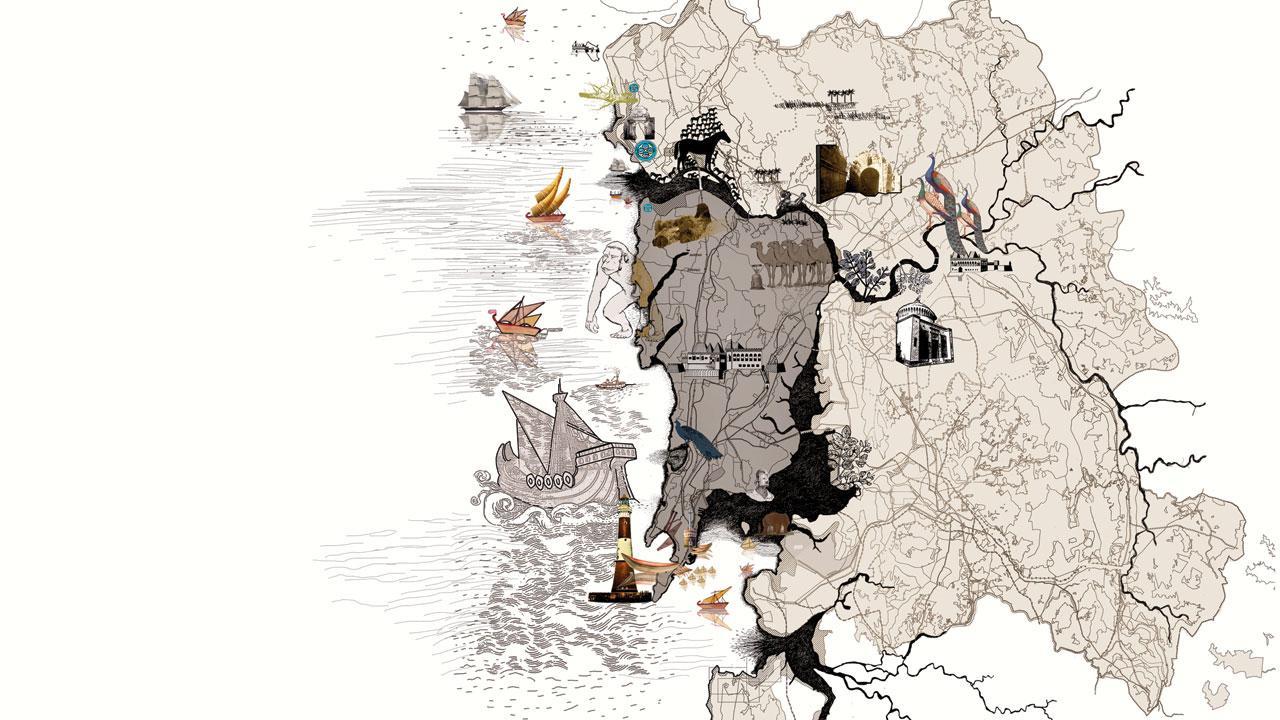 A map of the MMR. The region has a geographical expanse of over 4,000 sq km, covering a crucial part of North Konkan as wide as Bhiwandi and Kalyan to the North and Alibaug, Pen and Khalapur down south. Pic Courtesy/ MultipliCITIES, Neera Adarkar

Weighing nearly 2 kg, MultipliCITIES, a new and undersold hardbound on the multiple urban cultures of the Mumbai Metropolitan Region, is quite a dense volume. It deals with a gigantic geographical expanse of over 4,000 sq km under the MMR, covering a crucial part of North Konkan, including Bhiwandi-Kalyan up north, and Alibaug, Pen and Khalapur down south. Little wonder that author Neera Adarkar—aided by a team of academics-architects archaeologists-visual artists, chiefly Suraj Pandit and Archana Hande—devoted over five years to showcase the history of the urban settlements in MMR.

The book zeroes in on 500-odd sites, of the total 2,800 listed by the MMR- Heritage Conservation Society.  It accounts for a mega span of 25 centuries—focusing on sites as old as Gilbert Hill (Andheri) dating back to 5th century BC, and modern mansions like Dr BR Ambedkar’s Rajgruha (1933) as well as the famous Shivaji Park Housing Scheme, which rose after reclaiming Mahim’s coconut groves in the 1930s. The book draws from varied reference texts—cave inscriptions to travelogues to modern history accounts. 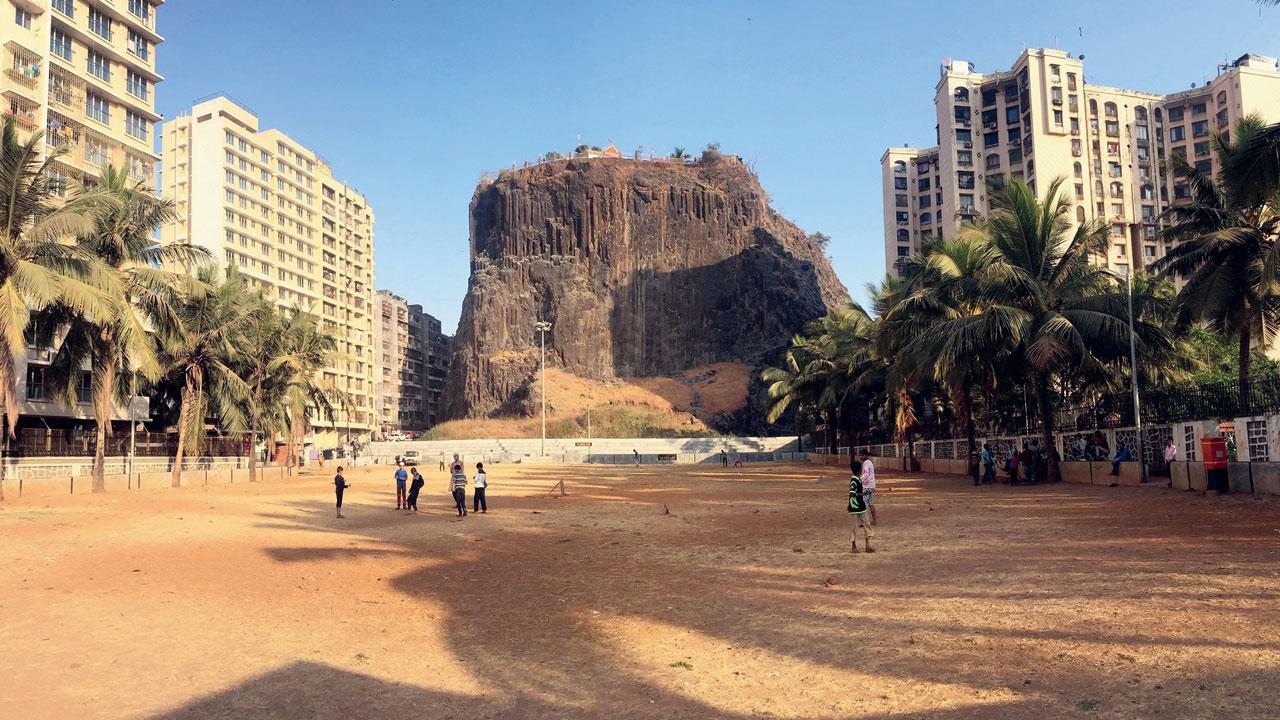 The Gilbert Hill  in Andheri dates back to 5th century BC

The region’s settlers are indeed multi-hued, hailing from different Indian states and foreign countries: kings, invaders, soldiers, monks, merchants, craftsmen, mill workers, artists, activists and freedom fighters. The MMR owes its unique make up to the plural porous cultures that it accommodated. The trajectories of towns like Nala Sopara, Kalyan, Kanheri, Mahim and Alibaug demonstrate the architectural (and social) innovations brought by Arab traders and rulers/feudatories who owed allegiance to powerful Sultanates. The book is therefore rightly dedicated to “past and present settlers who have called the region their own”.

It is another story that MultipliCITIES has not reached the present-day settler, whether migrant or native, whose sense of belonging would have only grown after he or she got a nuanced understanding of the tangible (built) and intangible heritage of the region.  It is commendable to seek urban researchers to piece together a mosaic of urban histories and archaeological-architectural structures of distinct periods, but that is a job half done. The publishers (MMRDA) should have ensured an aggressive promotion through government agencies.

MultipliCITIES is a collector’s publication (reasonably prized at Rs 2,500), which can be incorporated in the must-have lists of educational institutions and state tourism bodies. The book was officially released by former Chief Minister Uddhav Thackeray in July 2021, after which it was temporarily unavailable online, which impeded the sale of the first thousand copies. Understandably, book promotion cannot be a priority in a COVID-infected and politically unstable world.

But MultipliCITIES is an all-seasons compelling positive narrative, which has takers at any point in time in Maharashtra. It is in the interest of the administrators of the region—the guardians who shape its present and future —to overtly publicise MMR’s past. 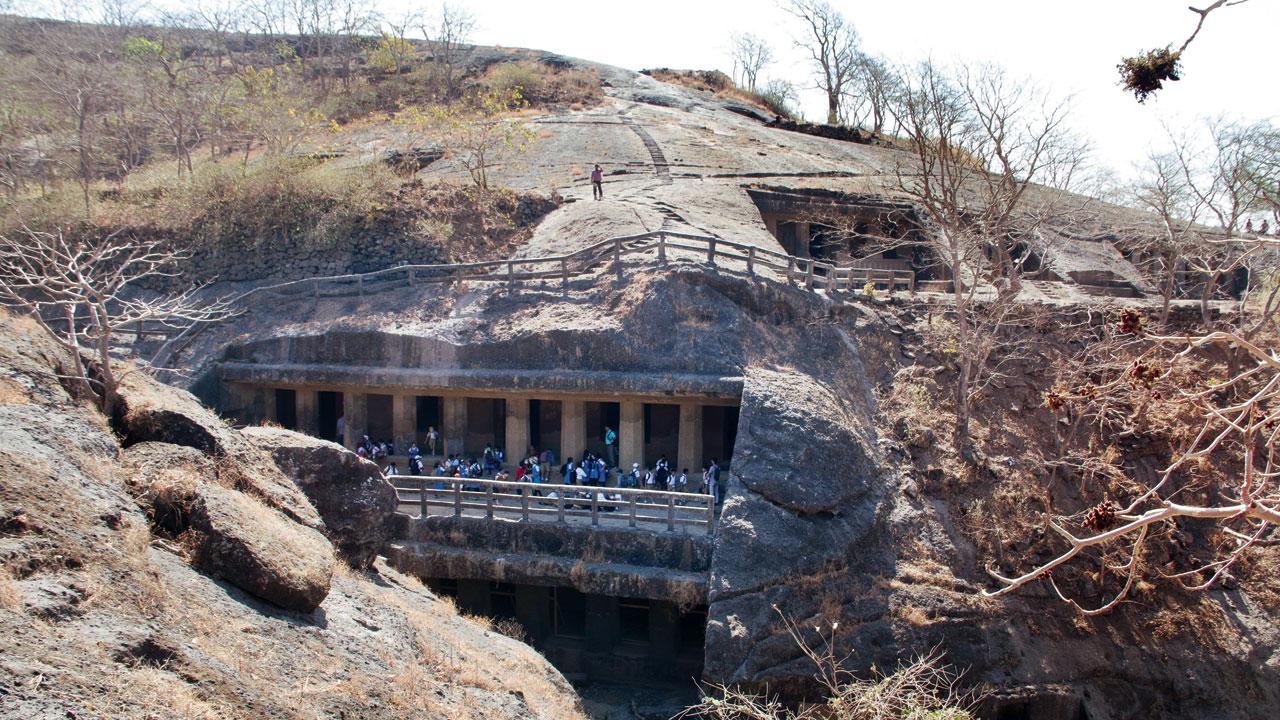 While there is a distinct body of books on Mumbai’s heritage, MultipliCITIES is a step further because it situates the famed island city of Bombay in the larger framework of the urban centres, which flourished and declined. The book redefines the so-called distant “suburban” sites, oft-undervalued and under-celebrated in the surrounding sphere. Sites as diverse as Ambernath’s Shivalaya, Uran’s Karanja Fort, Matheran’s Byke Bungalow, Bhiwandi’s Karve Wada, Devloli’s stepwells and Sopara’s Buddhist stupa relics, have been factored in with a sense of jubilant pride.

As Adarkar, architect-urban researcher known for earlier books like The Chawls of Mumbai: Galleries of Life, and One Hundred Years One Hundred Voices, Oral History of Girangaon (with Meena Menon), passionately points out that what is popularly now seen as “distant or suburban by Mumbaites has a longer and richer history of urbanisation. Mumbai’s architectural history remains in public consciousness because of the Gothic, Indo-Saracenic and Art Deco building sites (particularly in South Mumbai), which emanate power and modernity. However, Bombay emerged as capital of the Bombay Presidency in the late 17th century. The book showcases the architectural wonders which predate the modern-urban-colonial Bombay cityscapes”.  For instance, the Gharapuri Island evolved from the pre-Mauryan period. Kanheri’s advanced water management systems and rainwater harvesting goes back 1,800 years. Virar’s popular Jivdani shrine, which served as a checkpost, dates to the Satavahana period. Unfortunately, the present concrete-infested landscape of Virar, Nala Sopara and Kalyan bears no resemblance and offers no clue to its ancient habitation. But books like MultipliCITIES connect the dots.  They offer the right window to forgotten histories, political annexations, changing economies, migration patterns, industrial work cultures and plural influences which give birth to cosmopolitanism as a defining identity. 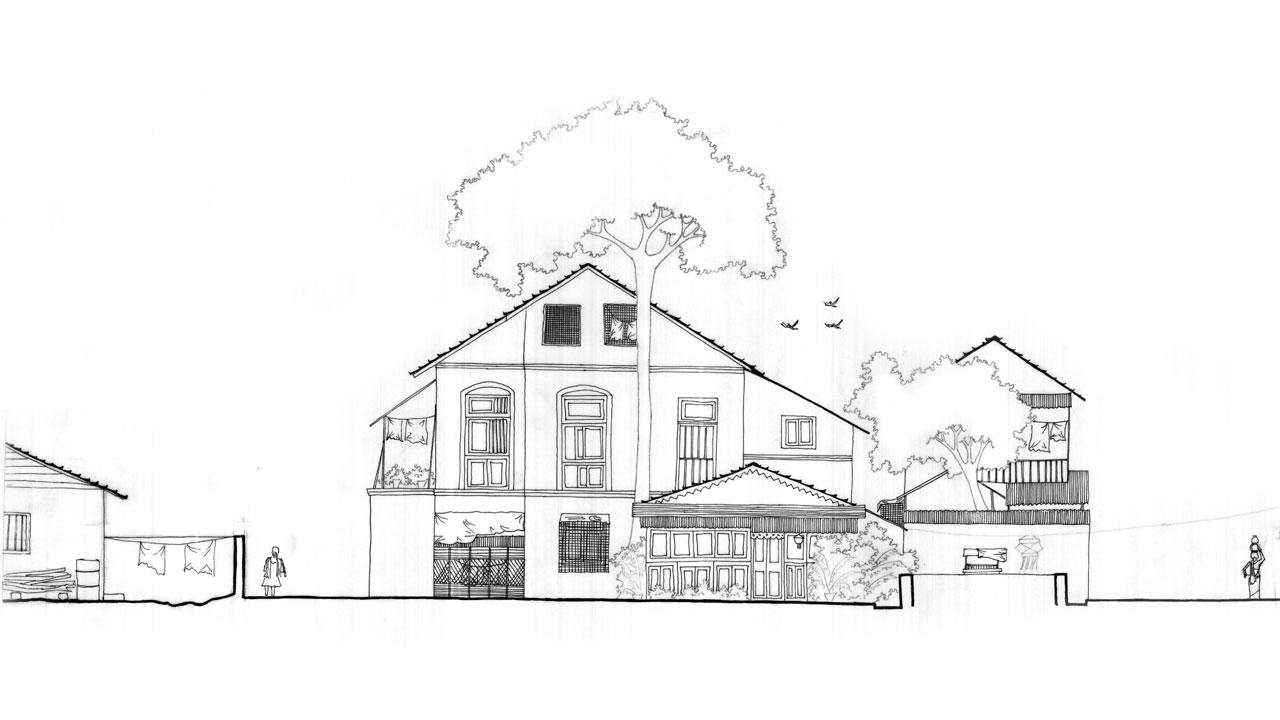 A map of the Chembur gaothan, an agrarian centre

MultipliCITIES offers an exciting but non-linear zig-zag—rather jerky in the beginning—tour of MMR, as chronology is not the sole navigational device. The eight chapters—illuminated by breathtaking photographs, maps, paintings and sketches—do not “museumise the lived reality... and freeze it in time”. For instance, the second chapter focuses on the coexistence of rock-cut Buddhist caves and Pashupata Shaiva monasteries (6th century CE) at Jogeshwari and Magathane. The same caves surface in the chapter devoted to the advent of the Portuguese. Our Lady of Immaculate Conception Church, Mt. Poinsur was built above the Mandapeshwar caves in 1544 CE by a Franciscan missionary. The church was functional up to 1739 CE, after which it was destroyed by the Marathas, who took the property’s timber to Thane.  The ruins of the church, and the rock-cut caves beneath, were revived in the next century. At one point, the cave temple idols were worshipped by Roman Catholic inhabitants of the neighbourhood.

What is underlined in the story is the transformative evolving journey of an architectural site in the context of the lived experience it offers in different timescapes. While functional concerns drove the usage of sites, the ruling powers also reset the space dynamic. 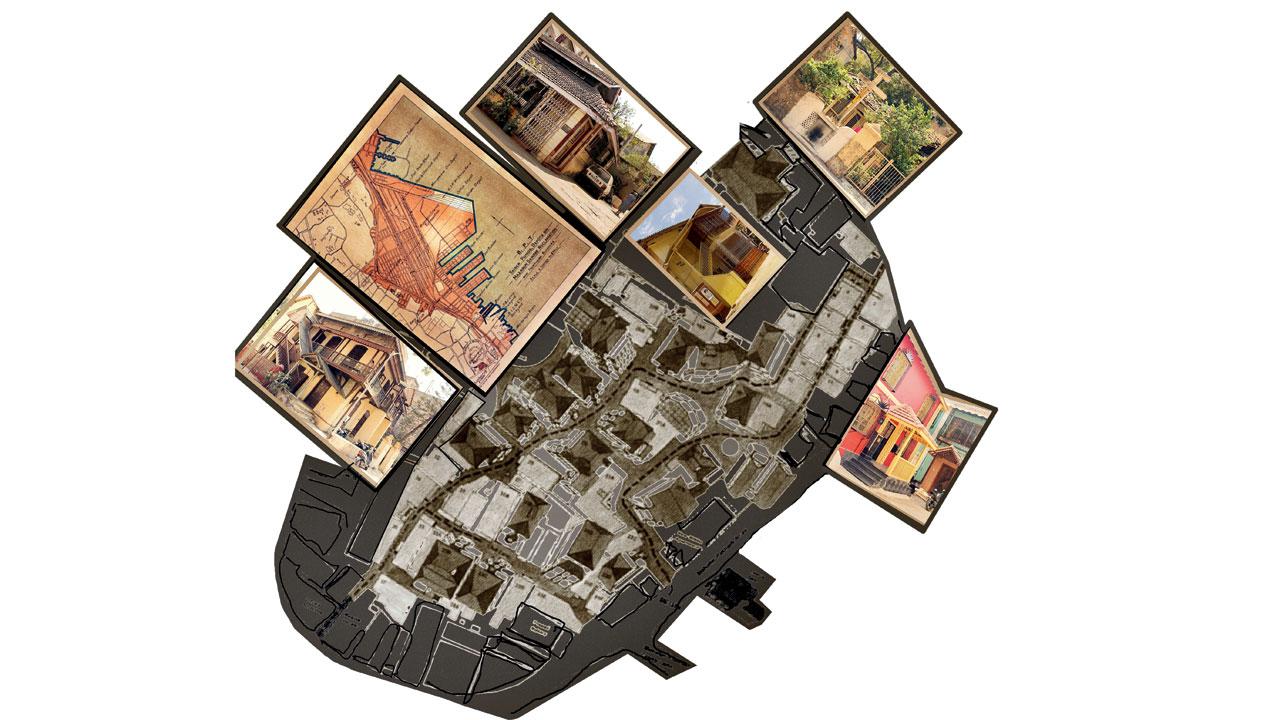 A map of Matharpacady, a village in the Mazagaon area

The book, in every sense, but more so in the visual-photographic design sense, awakens the reader to urban cultures and sites, which received and absorbed local and foreign influences with grace.  For instance, the embrace of Marathi in Vasai’s churches by the Koli and agrarian communities, despite the conversion from Hinduism to Christianity, adds a new dimension to the precincts in Vasai.  Likewise, the coexistence of Wadas (a family housing structure brought by the Peshwas) with Muslim Mohallas (houses placed along a shared street) stands out in Bhiwandi, Panvel, Badlapur and Kalyan.  Wadas lent themselves as community spaces, like the Karve Wada in Bhiwandi hosted nationalist leaders (Lokmanya Tilak included) and performers like Bal Gandharva. Often, vernacular architectural vocabularies in Hindu and Muslim structures impacted each other, as manifest in the similar looking facades of Kumble Wada and Tanki palace in Kalyan.

MultipliCITIES can be read in multiple ways—either to be treated as a linear timeline or as a visual treat, which can begin from any precinct/period of personal interest.  It can also be a primer for those who want to delve deeper into a built heritage landscape; or a guide for those who want to map the MMR by way of choosing newer sites and structures that merit attention. For those into conservation, the book is a call for action against public damage and apathy.  Multiple possibilities open, but only when the book reaches the intended reader.

Next Story : Must stop dumping trash in empty buildings