And Ma can’t sing with Sagar

Sagar Gorkhe, termed Maoist twice and sent to jail, where he fights for the rights of the inmates, continues writing songs—of hope: “From wounds shall burst out vines/Learning how to blossom again” 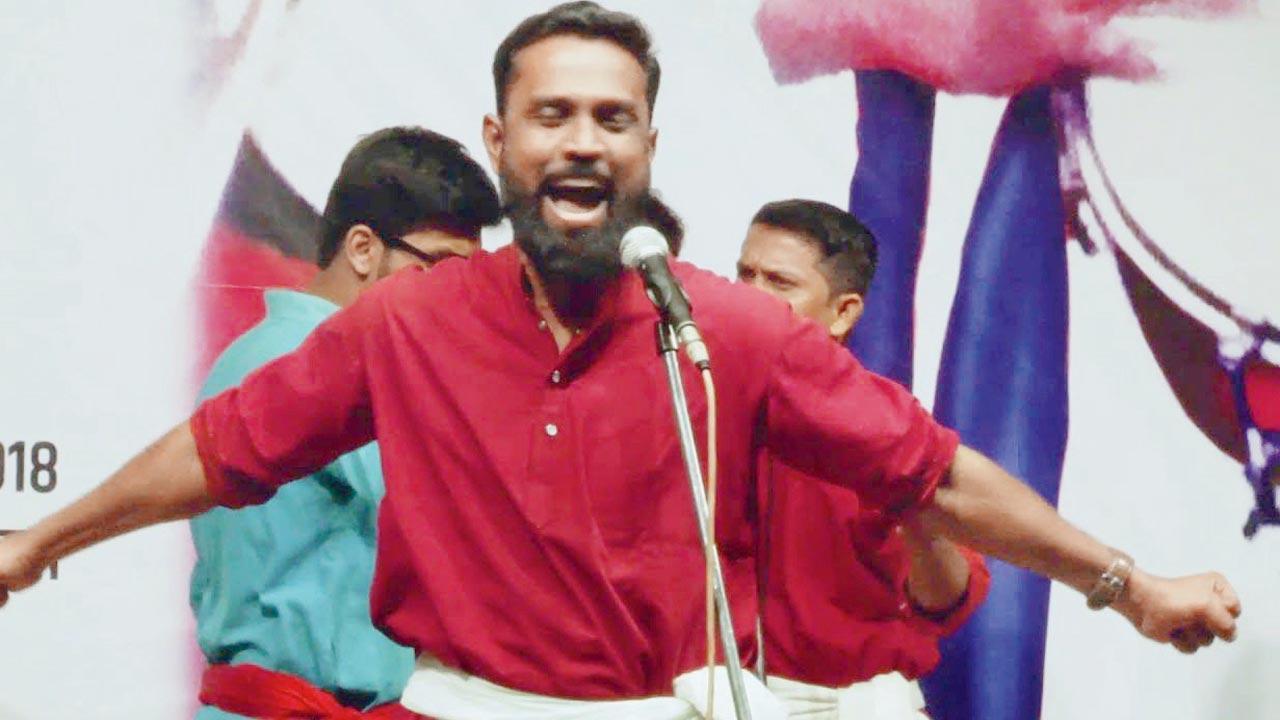 Sagar and his mother Surekha would sing together—songs against caste, class and gender oppression, songs he had written. Pic/Twitter

Sagar Gorkhe, a Dalit accused in the Bhima-Koregaon case, was on the fourth day of his hunger strike at Mumbai’s Taloja Central Jail when his mother Surekha learnt about it, via a WhatsApp forward on her daughter’s mobile. Surekha stopped taking food. Her family and members of the Kabir Kala Manch, a cultural troupe to which Sagar belongs, tried to coax her into eating. She chewed and chewed but not a morsel went down her gullet. “Beta hai, bhooka [hungry] hai,” she explained to them her body’s unwilled revolt.

Sagar went on an indefinite fast on May 20, to protest the denial of basic facilities, like a mosquito net, to jail inmates. He broke it on May 28, after assurances from Kapil Patil, a Maharashtra MLC, that his complaints would be addressed. Sagar’s defiance was like Billy’s in Prison Trilogy, which Joan Baez sang decades ago: “In an Arizona jail there are some who tell the tale how/Billy fought the sergeant for some milk that he demanded/Knowing they’d remain the boss/Knowing he would pay the cost/They saw he was severely reprimanded.”

Sagar is of sterner stuff than Billy, who, Baez lamented, committed suicide.

Possessing a mesmerising voice and admirable skills to compose lyrics, Sagar sent a song from Taloja to his Kabir Kala Manch mates. One of its stanzas, translated by Ruturaj Sawant, predicts: “Your prison-cages shall turn to water/When I shall sing again/Demoralised out of your wits/When you see the fight in me again.” The next stanza identifies those responsible for his incarceration: “Religious Casteist Serpents/Weigh heavy on chest/Refusing to be burnt on a pyre/I growled. Criminal! They proclaimed.”

Surekha and her daughter Pooja went to Taloja, from Pune, on June 1. Why did you go on hunger strike, she asked over the phone, in a tone only mothers can conjure, as she longingly gazed at her son through the glass pane separating them. Her maternal gaze deemed he had lost weight. “The fast was to have the rights of all of us respected in jail,” Sagar replied, adding, “Ma, don’t take my tension. Get your cataract operation done.”

She wished to hold him, touch him, even feed him.

Surekha missed her chance to do so on April 27, two days after Sagar turned 34. On that day Sagar was to be in court, where the family had taken mutton curry for a belated celebration. But Sagar was not brought to court. She thought about the past, as she does daily, when she and he would sing together—songs against caste, class and gender oppression, songs he had written. Singing is the family’s analgesic from the perpetual stabbing pain of poverty.

At 8 pm every day, Surekha reports at a hospital, where she feeds patients, takes them to the toilet, changes their clothes when these they soil. She snatches sleep amid their groans. At 8.20 am she is home. She gets R8,000 a month. Around 12 noon, she walks for an hour to do “jhadu-pochha” and wash utensils at three apartments. Her husband is incapacitated by kidney stones; Pooja has yet to get a job; Sagar’s younger brother began to ride a two-wheeler for a cab aggregator just a fortnight ago.

“Even when 4 or 5 years old, Sagar would sing a song once he heard me sing,” Surekha told me. He studied at Pune’s Ambedkar College, financing himself by washing cars and sweeping society compounds. At a college programme, he sang so bewitchingly that the Kabir Kala Manch invited him to join them. He did, singing and doing odd jobs.

In 2006, after the Khairlanji massacre, the Manch cultural programmes acquired a sharp edge. Their songs and street plays blasted the Lavasa city project. Then came the state crackdown. Sagar went underground for two years, beginning 2011. When they resurfaced in 2013, he and Ramesh Gaichor were jailed. The charge: they were Maoists. They were bailed out in 2017. The case drags on. On September 7, 2020, they were arrested for their alleged role in the 2018 Bhima-Koregaon violence. They are Maoists, the state declared again. Charges are yet to be framed in the Bhima-Koregaon case.

Surekha does not turn to God to lighten her heart. Nietzsche-like, Sagar would tell her, “There is no god”, marshalling the evidence of India’s heartbreaking poverty to bolster his case. Her God died years ago. Her hope is the dream her husband saw before April 25: Sagar dressed up in new clothes, laughing and chatting. Her husband woke up before Sagar could break into a song.

At this, I hear Bob Dylan sing: “Yonder down here in this lonely crowd/Is a man who swears he’s not to blame/All day long I hear him shout so loud/Crying out that he’s been framed/…. Any day now, any day now/I shall be released.”

My mind tries to set to melody this stanza from Sagar’s prison song: “Sticks and batons/ bruises etched on body./Silently, I live through shooting pain/But from wounds shall burst out vines/Learning how to blossom again.”

Only if he could sing about Acche Din, he wouldn’t be in prison, would he? Mera Bharat Mahan!

Next Story : A fight to prove might, who’s heavy, who’s light