The harshness of prison silences many, but not Ramesh; in fact, it led him to write more and more songs—of the people, for the people, in the hope of transforming India 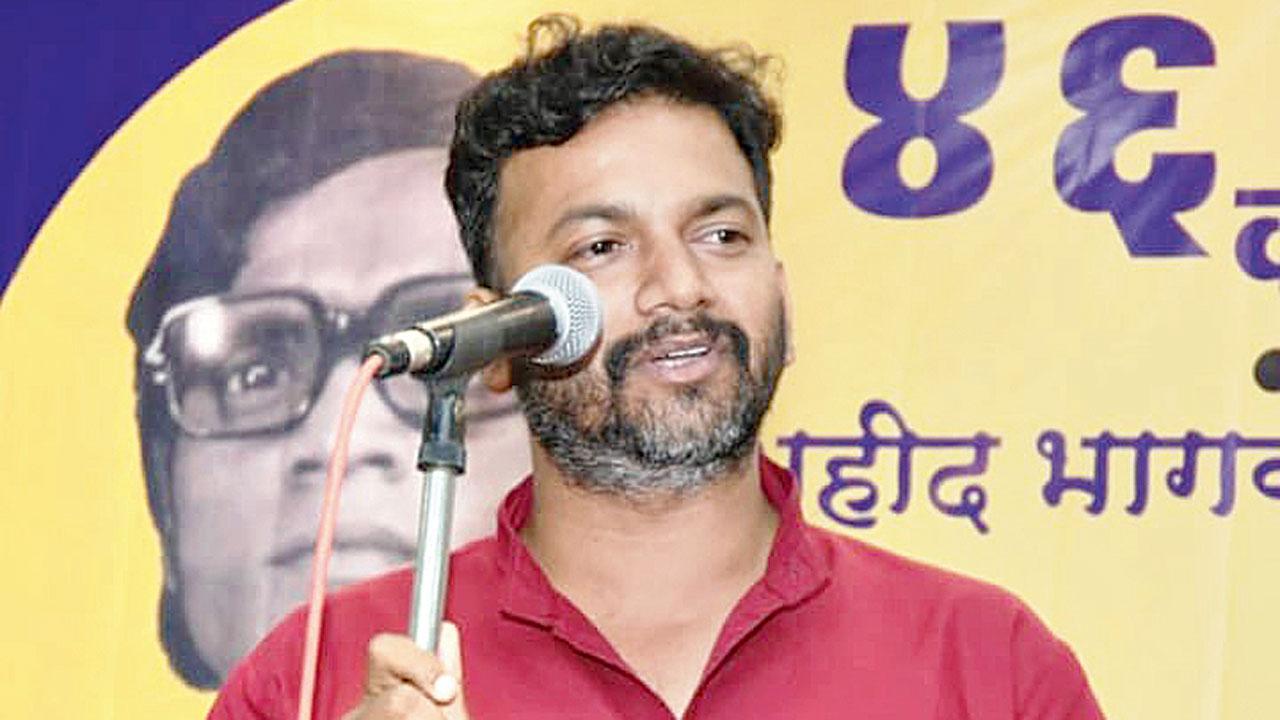 After reading books by B R Ambedkar, Ramesh realised that class and caste are, like Siamese twins, inseparable; and thus a rebel was born. Pic/Facebook

When the going gets tough, the tough get going.” Tough has been the life of lyricist and singer Ramesh Gaichor. And tough is Ramesh. Consider this: In 2011, he and his mates in the Kabir Kala Manch, a cultural troupe, went into hiding, as the State hunted for them. It did not want the people to hear their songs against caste, class and gender oppression. In 2013, Manch activists courted arrest. Gaichor and Sagar Gorkhe were jailed, bailed out only in 2017. During incarceration, Ramesh wrote around 100 songs, his sister Pranali Prashant Parab says. The harshness of jail life would have silenced most.

Yet, in 2019, when the Modi government introduced the Citizenship (Amendment) Bill (CAB) in Parliament, the first step towards preparing the National Register of Citizens (NRC), Ramesh got going. Words flowed from his pen. Read the lyrics, translated from Marathi by Advait Deshmukh: “By forming the NRC/ By forming the CAB/ It wants to snatch our nation away/ Say Inquilab, say Inquilab,/ Say Inquilab zindabad.”

The song justifies the claims of citizens on the nation, because, as Ramesh writes, “We too have irrigated the fields/ It’s been a relationship of hundreds of years./ Why do you ask for documentation/ When history speaks for itself?” He answers the question thus: “Claiming them to be outsiders,/ They will drive the Muslims away/ Establishing detention camps,/ The regime will make them rot to death.”

Ramesh then discloses the intent behind the CAB-NRC process: “It’s on RSS’ agenda/ To establish Manuvad/ Destruction of Dalits and Muslims/ Is the BJP’s slogan/ The regime is dismantling/ The people’s democracy and burning/ The Constitution away./ By forming the NRC/ By forming the CAB/ It wants to snatch our nation away./ Say Inquilab, say Inquilab,/ Say Inquilab zindabad.”

Mind you, Ramesh wrote this song a little over a year after police raided his house in connection with the 2018 violence at Bhima Koregaon. Ramesh grew up in a Pune slum, in a two-room tenement, with the roof made of metal sheet, which he shared with his parents, two siblings and a brood of hens. They sold eggs to augment the father’s monthly income of Rs 10,000-Rs 12,000 that he earned as a security guard. Pranali says Ramesh performed admirably in school and did BCom at Pune’s Wadia College, financing his studies by working at a hospital.

At Wadia, Amarnath Chautaliya, the founder of the Manch, discovered and nurtured Ramesh’s talent for writing and singing, took him for performances, and gave him Ambedkar’s books. Transcending his Maratha caste identity, Ramesh realised that class and caste are, like Siamese twins, inseparable. A rebel was born. Home-spun. Fearless. Tireless.

Before he and Sagar were arrested on September 7, 2020, under the Unlawful Activities (Prevention) Act for fomenting violence at Bhima Koregaon, they recorded a video in which they accused the National Investigation Agency of asking them to implicate others in exchange for preserving their freedom. They responded, “We aren’t the progenies of Vinayak Damodar Savarkar but are children of B R Ambedkar. If you ask us to give false statements against people…, we refuse.”

They are now in Mumbai’s Taloja Jail, where Ramesh continues to write songs, one of which describes the life there—and sung, with mirth, by Surendra Gadling, another Bhima Koregaon accused, during his short stay out on bail in Nagpur last year. When folk singer and activist Vira Sathidar, who played the lead in the celebrated film Court, died of COVID complications last year, Ramesh wrote a poem as a tribute to him.

In this poem, translated from Marathi by Hemant Karnik, Ramesh imagines a place—which could be a town, or a nation—witnessing a campaign against the exploitation of the downtrodden. “Among the campaigners is an ascetic/ Like our own Vira Sathidar,” writes Ramesh. The sacrifices of the ascetic are many: “He has staked his all/ Lost his all/ Even his pains and problems/ And his worldly worries/ He has abandoned.”

The Sathidar-like ascetic struggles as he is an “Ambedkarite well versed in the essential tradition of caste eradication/ A Marxist in the line of transforming the world through class abolition/ Merging the two images/ To compose the complete picture of Indian Revolution.” Sathidar is “an ascetic in the illustrious line of/ Buddha, Kabir, Tukaram and Bhagat Singh….” When the ascetic dies, his mantle is passed on to another of his kind, and at his death it would to a third… and so on. “Such were the ascetics who/ Created history but history never/ Had time to say a word about them.”

Just as we, including judges, have no time for activists who are incarcerated because of their fight to protect our rights.

But Ramesh would not care, for when the going gets tough, he gets going in the only way he knows. “And the poet lifts his pen/ While the soldier sheaths his sword,” the band Jethro Tull sang. But Ramesh’s mother, who had a minor heart attack soon after the 2018 raid, no longer roasts papads, and cries when she cooks chicken—the two preparations her son relishes. Mothers cry as their children are condemned to spend yet another Independence Day in jail, for writing songs to change India.

The writer is a senior journalist
Send your feedback to mailbag@mid-day.com.
The views expressed in this column are the individual’s and don’t represent those of the paper.

Next Story : Freedom on highways—misused and abused