Of God, Gandhi and the Preamble

In 1949, the Constituent Assembly debated furiously on the inclusion of the words God and Gandhi in the Preamble. A vote of 68:41 against, is a comment on the foresight of leaders who upheld the nation’s core values and principles, currently standing on very shaky ground 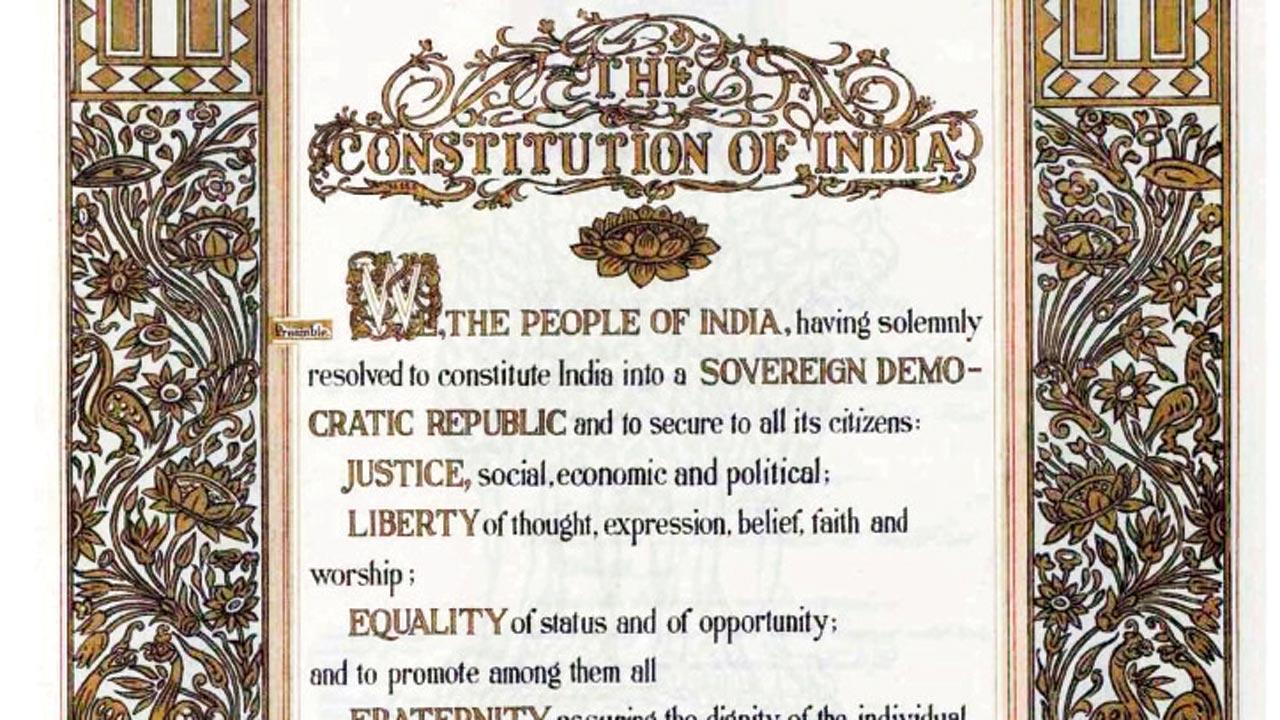 Notably, the first Preamble did not have the words socialist and secular. These were added in the 42nd Amendment


On the eve of Republic Day, with the growing dominance of Hindutva or Hindu nationalism, it is pertinent to recall the debate in the Constituent Assembly on whether to invoke God and refer to Mahatma Gandhi in the Preamble to the Constitution. The debate was triggered because of HV Kamath proposing an amendment for inserting “In the name of God” before “We, the people of India,” the words with which the Preamble begins.

Dr Rajendra Prasad, presiding over the debate, suggested that Kamath should not insist on the amendment as it befitted neither God nor Gandhi to be voted upon in the Assembly. Kamath said he was sure the people would endorse his “amendment in toto,” as it reflected the ethos of Indian civilisation to pray to God for acquiring strength, courage and wisdom to “transmute our baser metal into gold”.

A distraught Purnima Banerji pleaded, “To most of us, believers and non-believers, it will be difficult to affirm or deny God. Let us not try to invoke his name in vain.” There were members who claimed they were believers, but still thought it was morally wrong to impose their views on those who did not believe in God. Such an imposition, as AT Pillai argued, would infringe on the right to freedom of faith.

The House guffawed at Rohini Kumar Chaudhury’s suggestion that Kamath should substitute “God” with “Goddess.” Chaudhury’s was not a quip, but a statement made to highlight India’s religious diversity. “Sir, we who belong to Shakti cult, protest against invoking the name of God alone, completely ignoring the Goddess,” Rohini said. All this had Hriday Nath Kunzru say, “We invoke the name of God, but…while we do so, we are showing a narrow, sectarian spirit, which is contrary to the spirit of the Constitution…”

Govind Malaviya, the youngest son of Congress stalwart Madan Mohan Malaviya, who was ironically also one of the founders of the Hindu Mahasabha, pressed for a division on Kamath’s amendment. In an accusatory tone so typical of the Hindu Right, Malaviya said, “I want a division because I feel that we are doing an injustice to this country and to its people and I want to know who says what on this matter.” Presumably, his motive was to embarrass those who would vote against God.

But Malaviya was outwitted by Dr Prasad, who invoked a procedural rule to disallow the recording of who voted which way on the amendment, which registered 41 votes in support and 68 against. Kamath lamented, “This, sir, is a black day in our annals. God save India.”

But the battle over God was not quite over yet. Amendments linking God to Gandhi surfaced, a combination only the stout-hearted could oppose in those days. For instance, Shibban Lal Saxena wanted the Preamble to begin with, “In the name of God the Almighty, under whose inspiration and guidance, the Father of our Nation, Mahatma Gandhi, led the Nation from slavery into Freedom…”

Pointing out that the Irish Constitution began by invoking God and paying homage to its martyrs, Saxena wondered at the objections to include God and Gandhi in the Preamble. Brajeshwar Prasad said he objected to the Preamble mentioning Gandhi because the Constitution was not a Gandhian one; its foundation stones were the United States Supreme Court judgments and the Government of India Act, 1935. Saxena, however, withdrew his amendment after JB Kripalani said it would not be consistent with the respect for Gandhi to include his name in the Constitution that “may be…reshaped at any time.”

God’s most dogged soldier was Malaviya, whose amendment read, “By the grace of Parameshwar, the Supreme Being, Lord of the Universe (called by different names by different peoples of the world)….” After identifying, in prolix prose, the Supreme Being as the prime source of all authority and all that is good and wise, Malaviya’s amendment continued, “We the people of Bharata (India), Humbly acknowledging our devotion to Him, And gratefully remembering our great leader Mahatma Mohandas Karamchand Gandhi….”

When objections were raised that the essence of his amendment had already been rejected by the Assembly, Malaviya offered to delete the reference to Gandhi and substitute “Parameshwar” with “Supreme Being.” His argument was that the new phrasing will not refer to “God as such or to anybody’s particular God” – and yet celebrate the most distinctive aspect of India’s culture. Unimpressed, Dr Prasad ruled that “by simply omitting the word Parameshwar you do not take out of the amendment which has been defeated.” God, thus, could not get into the Preamble.

At the end of the debate, Kripalani said the Preamble enshrined democracy’s great moral and spiritual principles, which needed to be lived in everyday life. Otherwise, he said, “democracy will be made into autocracy…and…fascism.” With or without God in the Preamble!

It is for readers to decide whether India is headed towards authoritarianism, as so many insist it is. We can be sure, though, that with Pragya Singh Thakur, an unabashed fan of the assassin of Gandhi, in Parliament, a reference to the father of the nation in the Preamble would have made our democracy seem an indefensible mockery.

The writer is a senior journalist. Send your feedback to mailbag@mid-day.com

Next Story : Salaam to our stray superheroes