Rahul Dravid then and now!

How the recent tour to England was similar to the one in 2002 for current head coach, who may have not hit the high notes in the NatWest Series final that year, but did the hard yards to help India reach the summit clash, whose 20th anniversary was celebrated recently 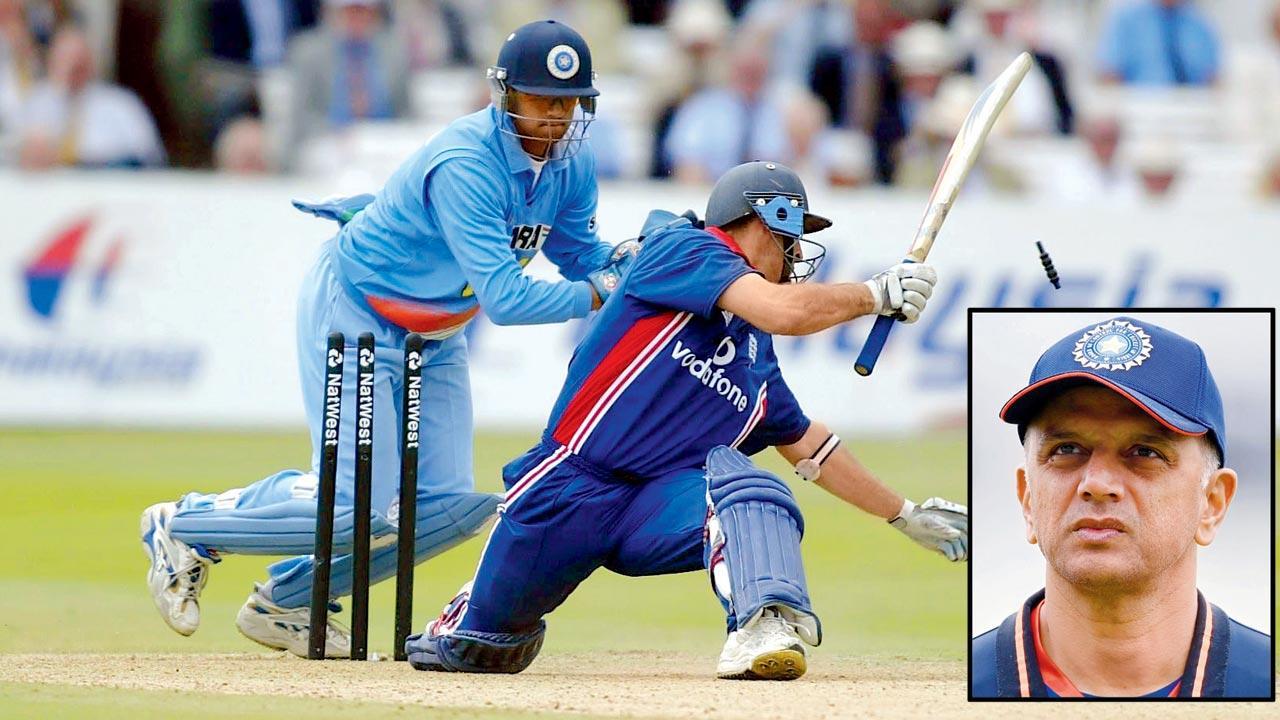 Had India won the second one-day international against England at Lord’s on July 14, it would have been a near-perfect 20th anniversary of the epic 2002 NatWest Series final win triumph.

I say near-perfect because that cricketing heist was pulled off a day earlier—on July 13—at the spiritual headquarters of cricket.

Be that as it may, India’s 2022 English summer was similar to the one they experienced in 2002. Like way back then, India and England shared the Test series honours (although both sides ended up winning one Test each as against this summer’s 2-2 result) and India similarly took the ODI honours.

I was fortunate to cover that NatWest Series, a triangular competition featuring Sri Lanka.

Mohammed Kaif and Yuvraj Singh deservedly attracted plaudits for piloting the NatWest victory with their 121-run partnership for the sixth wicket, but the summer also witnessed some heroics from the present head coach, Rahul Dravid. He was given the job to keep wickets in limited overs cricket on the West Indies tour earlier in the year.

Dravid didn’t give me the slightest impression that he disliked performing both roles as we walked on the hallowed Lord’s turf to get to the pavilion end after a practice session at the Nursery ground. “I see it as additional responsibility. It’s a great honour to represent your country and walk out there on the park with your mates. I try to do my best whether it is batting, wicketkeeping or fielding. Some days, it works out, sometimes it doesn’t. You’ve got to accept that,” he said. Then, he surprised me during the interview: “I’m beginning to enjoy wicketkeeping a bit more. Actually, it’s quite good because it keeps you involved in the game.”

As expected, Dravid kept wickets in India’s first game of the series. He held on to catches that dismissed opener Marcus Trescothick and all-rounder Paul Collingwood, and stumped Nasser Hussain off Yuvraj Singh as England piled up 271-7. Skipper Sourav Ganguly and Virender Sehwag put on 109 for the opening stand, but India lost Sehwag, Dinesh Mongia, Sachin Tendulkar and Ganguly in the space of 32 runs before Dravid and Yuvraj batted fluently for the visitors to beat the hosts by six wickets with seven balls to spare. Dravid stayed unbeaten with an 86-ball 73 while Yuvraj smashed an unbeaten 64 off 65 balls.

The fact that Ganguly’s men chased the target must have surprised opposition skipper Nasser Hussain, who felt chasing was India’s weak area.

Then India coach, John Wright, had learnt of Hussain’s utterances and must have had a quiet laugh.

Dravid’s next game against England was a rewarding one as well (82 and a 169-run stand with centurion Sachin Tendulkar) at Chester-Le-Street, where both teams shared points in a rain-caused no result.

Two days later in chilly Birmingham, Dravid teamed up with Yuvraj for a fruitful partnership (91 for the fifth wicket) just like he had done at Lord’s on June 29 to win in a chase. The target was only 188, but Dravid and Yuvraj began their rescue act when India’s innings resembled a burning deck at 59-4.

Dravid’s straight six off Thilan Samaraweera was a memorable stroke in his 64-run innings that ended in a run out, by which time India were nearly home.

A thigh injury kept Dravid out of the playing XI against England at The Oval, the only game Ganguly’s team lost in the tournament. But he was back at Bristol, where Sri Lanka were beaten by 63 runs.

A total of 18 runs at Bristol and the final at Lord’s meant that Dravid couldn’t finish the tournament with some personal batting satisfaction, but one can’t forget the job he did as wicketkeeper and a crisis man with the bat. There was fluency in his strokeplay and that never-give-up rubber stamp that pushed India’s file from one level to another as it were.

That Dravid was no sucker for going over the top after a victory was manifest in the fact that it was he, according to coach Wright in his book John Wright’s Indian Summers, who shot down the idea of the whole team taking off their shirts like Ganguly famously did after beating England in the final at Lord’s.

In the four-Test series that was to follow, Dravid made three hundreds, the most significant one being the 148 in the third Test at Leeds, where India won after losing the opening Test at Lord’s and drawing the second Test at Trent Bridge. At The Oval where a draw ended the series 1-1, Dravid carved 217. It was an effort that deserved profound description and Rob Smyth did justice in his 2003 Wisden Cricketers’ Almanack report: “All the while Dravid ground on and on, false strokes as rare as a steak tartare, to become the first Indian to make centuries in three consecutive Test innings in the same series since Sunil Gavaskar in 1970-71. He also took his crease occupation for the series past 30 hours—an entire Test match, or eight showings of the Oscar-nominated Lagaan—and eventually made his highest first-class score, in 10 and a half hours.”

Dravid never had a bad tour in his six international visits to England as a player. The first one as head coach of the senior team was not disastrous either. It’s an appropriate time to say, wah, Wall!

Next Story : The vaccine is still our best bet against Covid