Rivalry of Sants and Naths

Nath-jogis became particularly famous from the 10th century onwards, as indicated by tales of Matsyendranatha and Gorakhnath, the founders of this order 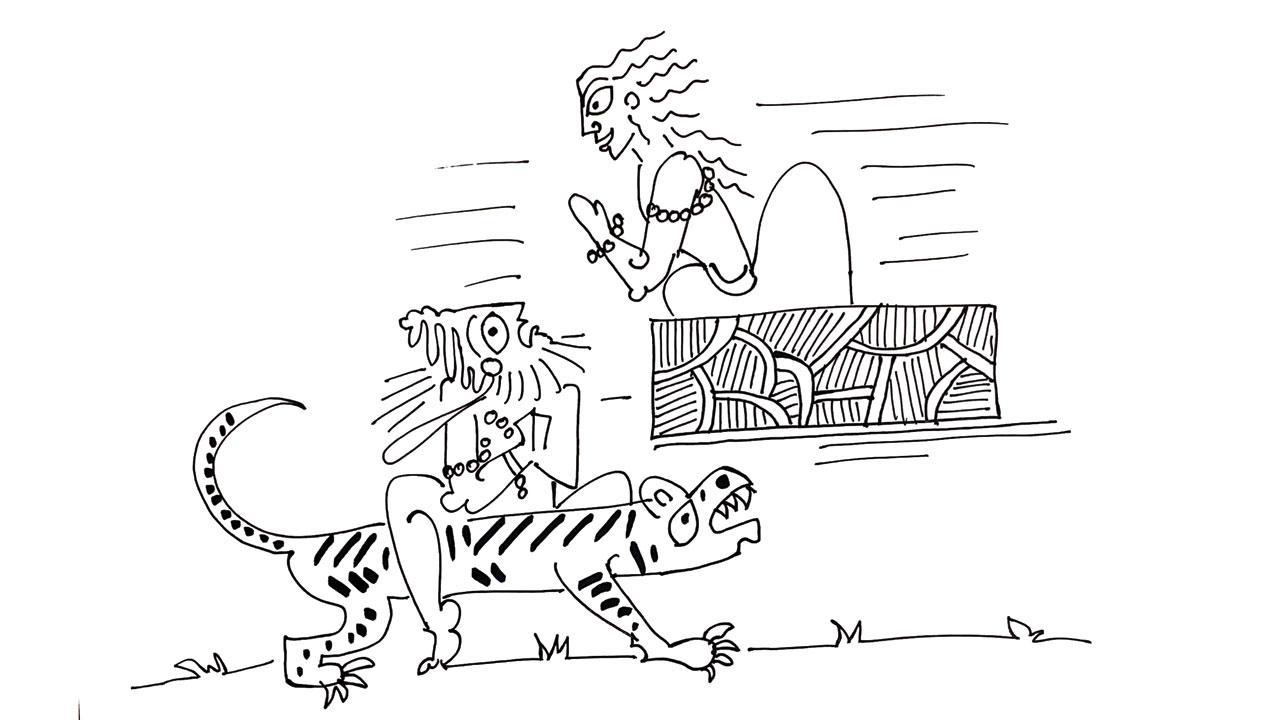 In 13th century Maharashtra, Dyaneshwar translated the Bhagavad Gita into the local language. It was a great cultural revolution. He encouraged people to use emotions and feelings to connect with the divine. This was the Bhakti Marg or path of devotion. Here, Dyaneshwar or Gyan-dev is addressed as Sant.

In legends, Dyaneshwar was challenged by one Changa Nath, a Tantrik yogi. Changa Nath came to the village riding a tiger, to intimidate the young poet-saint.  Dyaneshwar caused the wall in the village he was sitting on to move through the air. When Changa Nath saw Dyaneshwar and his siblings travelling through the sky on a wall, he was awestruck and humbled. This story of confrontation between a Tantric Nath-Jogi and a Bhakti Margi Sant is a recurring theme in India’s religious literature.

In the last 500 years, especially since Mughal times, we see the rise of the Bhakti Marga. This eclipses an earlier practice that focused more on tantric rituals and gurus. Nath-jogis became particularly famous from the 10th century onwards, as indicated by tales of Matsyendranatha and Gorakhnath, the founders of this order.

There is a fundamental difference between the Tantric Marga and Bhakti Marga. The Tantric Marg seeks to generate power (siddhi) within the body, using various ritual practices. Here, all gods and goddesses are subservient to the tantric practitioner who is powerful. He wields power over life and death, the ability to fly and walk on water and change shape and size. In contrast, in Bhakti Marga, God is outside the body. Avatars of Vishnu, such as Ram and Krishna, are adored. It is through this devotion that a saint gains his power and reputation.

The Bhakti Marga is associated a lot with song, music and dance. People gather together to sing and dance bhajans and kirtans. Some notable bhaktas were Chaitanya Mahaprabhu of Puri, Annamacharya of Tirupati, Haridas of Karnataka, or the Panch Sakha poets of Odisha. But in the tantric rituals, music and emotions play very little role. The technique and secret knowledge of various rites and rituals, architectural practices, astronomy, and even secret, sex rites are given more importance. The purpose of Tantric rituals is to gain power. The purpose of the Bhakti Marga is to outgrow this world of delusion, which makes us crave power, and seek Moksha at the feet of the Lord.

In Tantric literature, we hear stories about how the gods are conquered. For example, in the story of the Dattatreya we hear how his mother Anasuya through chastity is able to overpower Brahma, Vishnu and Shiva. Similarly, there are stories of Nath Yogis who are able to withstand the might of Hanuman and Bhairava. They are thus seen as almost greater than the Hindu pantheon of gods.

This is completely reversed to the Bhakti Marga where the Hindu pantheon of gods enable their devotees to tower over the Tantric yogis who travel on tigers. In one story from Rajasthan, when the Tantric Yogi Taranath takes the form of a tiger and tries to attack a bhakt, Payahari, the bhakt prays to god who transforms the yogi from a tiger into a donkey, until he apologises for his arrogance.

In the works of Kabir, too, we find reference to this tension between the Naths and the Sants, those who sought power and those who sought grace. This rivalry between Tantric and Bhakti traditions is rarely commented upon as people seek to ignore Hinduism’s long history and diversity and seek to make Hinduism simplistic and homogenous.