The grapes of wrath

The struggles of returning migrants are reminiscent of those of the fictional Joad family, who migrate from rural Oklahoma to California, in John Steinbeck's 1939 novel depicting the US farmers' exodus 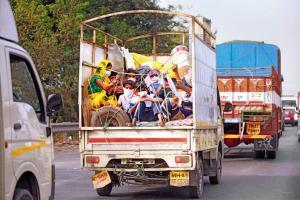 The defining image of India's lockdown, even as it is rolled back, will remain the lakhs of migrant workers who trudged home hundreds of miles away. Their misery punctured the bubble in which we live, prompting us to ask: What must it feel to be them? To get an idea, turn to John Steinbeck's The Grapes of Wrath.

Published in 1939, after the Great Depression had scarred the United States, Steinbeck's novel narrates the story of the Joads, an Oklahoma sharecropping family, which was evicted from their farm because of crop failure. The dispossession had the family of 11 and a lapsed preacher board a sedan, purchased from a junkyard and turned into a truck, and drive to California, where it was said farmhands were required.

The Grapes depicts rural-to-rural migration, in contrast to India's current urban-to-rural outflow. The causes of migration in the 1930s America were, obviously, different from those that have triggered the exodus in India. Yet the compulsion common to both groups, separated by time and culture, is the need for people to ward off hunger. The Joads soon realise they constitute the exodus of farmers to California. Steinbeck writes, "On the highways the people moved like ants…" This imagery could well have been of India 2020.

The Joads experience the death of family elders, reminiscent of Indian migrant workers who succumbed to the stress of walking on the highway or perishing in accidents. In The Grapes as in India 2020, migrants bond in contrast to strangers usually maintaining social distance. They share their meals and money, even though perilously meagre, and generously pass information vital for survival.

The Joads meet a father-son duo on their way back from California, where they could not sustain themselves. They are returning home, to Pampa, Texas, where they know they will not find work. Why return then? The father replies, "But at leas' we can starve to death with folks we know. Won't have a bunch of fellas that hates us to starve with."

This remark could well have come from the Indian migrants, who have repeatedly said they wish to die in their villages in case they were to contract the Coronavirus. We may not hate migrant labourers, but their accounts testify to their shock at the city's heartlessness. Like them, Ma Joad, too, discovers: "If you're in trouble or hurt or need – go to poor people. They're the only ones that'll help – the only ones."

The Joads reach California, only to find there are no jobs for the asking, as handbills distributed in Oklahoma had advertised. That was a ruse of landlords to lure an excess of labourers to push down wages. Murmurs against penurious remunerations have the police compel farmhands to work at gunpoint. Or badmouth them as communists. Or hire goons to foment trouble, which becomes a pretext to crush labourers.

"When a majority of the people are hungry and cold they will take by force what they need…. Repression works only to strengthen and knit the repressed," Steinbeck writes. The repressed simmer with rage because the state, keen to preserve the unequal social order, only considers the "means to destroy revolt, while the causes of revolt" are allowed to fester.

The Grapes anticipates the possibility of the lower class uniting to wage a battle for their rights. It is on such a mission a Joad leaves: he realises that the redemption for the poor lies in class action, not merely in their individual struggle to overcome hunger, evident from these lines: "'I have a little food' plus 'I have none.' If from this problem the sum is 'We have a little food,' the thing is on its way, the movement has direction… This is the beginning – from 'I' to 'we'."

We need to remember these lines when migrant labourers return from villages, where they cannot earn even the poor wages they receive in cities. Their employers will seek to exploit the competition for jobs to reduce their cost. To them, Steinbeck's warning: "If you could separate causes from results, if you could know that Paine, Marx, Jefferson, Lenin, were results, not causes, you might survive. But that you cannot know. For the quality of owning freezes you forever into 'I,' and cuts you off forever from the 'we.'"

The fear of job losses and salary cuts gnaw even middle-class professionals. Their fear could turn into wrath, which, according to Steinbeck, helps people survive. He writes, "The women watched the men, watched to see whether the break had come at last… And where a number of men gathered together, the fear went from their faces, and anger took its place… And the women sighed with relief, for they knew it was all right – the break would never come as long as fear could turn to wrath." The solution to our troubled time, as was true of the America of The Grapes, is in the merger of "I" into "we" the people of India.

Next Story : Citizens hold the key to the 'unlocking' of Mumbai