Torment of Muslims in COVID time

The bruising rhetoric over the Mahakumbh and the decisions of the Supreme Court and the Varanasi civil court convey to Muslims that apart from sharing the misery of the pandemic with everyone, they must also pay for the misdeeds, real or imagined, of their ancestors 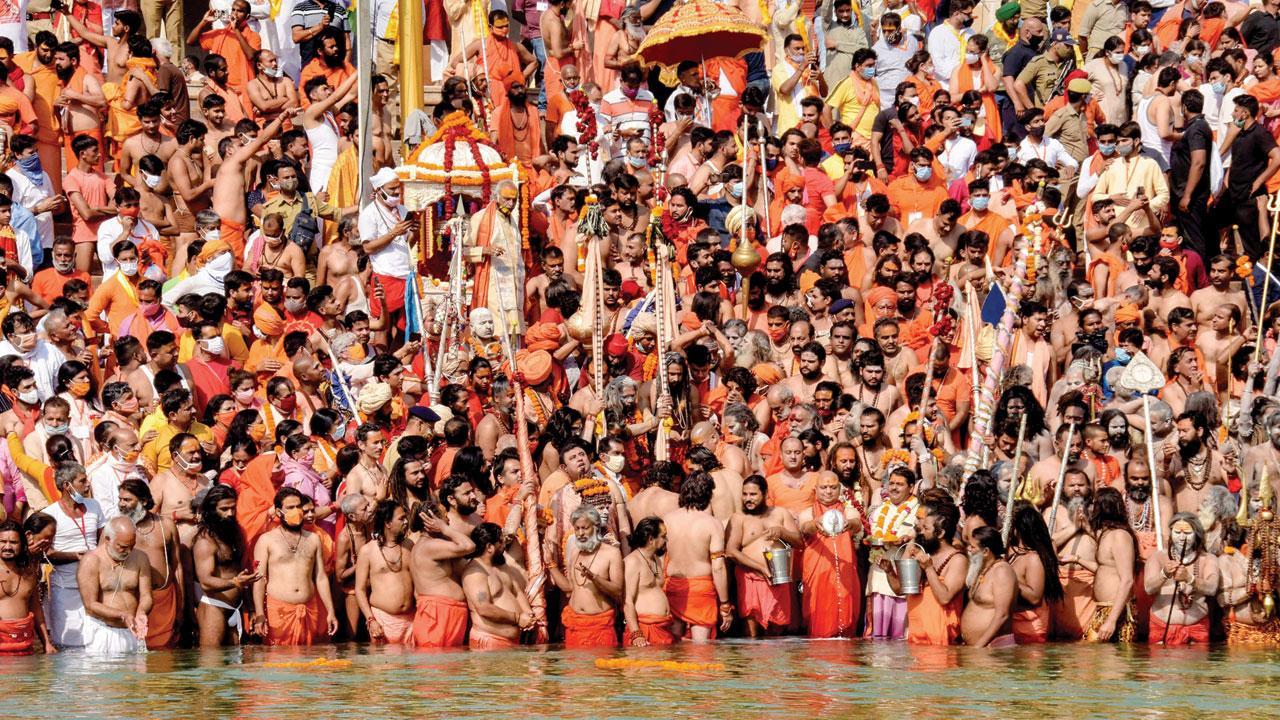 Those who criticised Tablighi Jamaat last year have failed to see that to establish Hindutva’s primacy, the BJP can even risk exposing millions of Hindus to the virus


It is insensitive to raise an issue not directly connected to the second wave of COVID-19 sweeping across the country. Yet the code of civility must be transgressed to declare without equivocation: Muslims are doomed to become second-class citizens under the Bharatiya Janata Party rule. It is the duty of every conscionable citizen to point out to the nation that when people are coughing to death, when there are queues outside crematoriums to carry out the last rites of those whom COVID-19 felled, for the BJP, the letter H still stands for Hindutva, not Humanity; the letter C stands for Communalism, not Coronavirus.

The BJP’s incurable obsession with Hindutva is evident from the government’s decision to permit lakhs of people to assemble at Haridwar for the Mahakumbh. This decision was not taken under popular pressure, evident from what Uttarakhand Chief Minister Tirath Singh Rawat said: “We are sure the faith in God will overcome the fear of the virus.”

The BJP’s position on the Mahakumbh, as many have pointed out, is in sharp contradiction to the sharp attacks its leaders directed against Tablighi Jamaat followers for staying together in Delhi during the lockdown of last year. But these critics have missed mentioning a frightening idea in their analyses – that to establish Hindutva’s primacy, the BJP can even risk exposing millions of Hindus to the virus. If its leaders are so cynical and cavalier about exploiting the Hindu religious sentiments, is it prudent to believe that they would respect the rights of Muslims in an India slowly turning into a Hindu rashtra?

Consider this: From 2018 onwards, the BJP government took to pulling down the houses surrounding the Kashi Vishwanath Temple in Varanasi, to beautify one of the holiest shrines in India and make it easily accessible to pilgrims. The demolition drive prompted people to speculate whether it was insidiously designed to remove or relocate the Gyanvapi masjid, which abuts the Kashi Vishwanath temple and was supposedly built on the ruins of a Shiva temple allegedly destroyed by Mughal emperor Aurangzeb.

This speculation gained ground because the area around Ayodhya’s Babri Masjid, too, had been cleared before it was reduced to rubble on December 6, 1992.

Now, consider this: In March, the Supreme Court admitted a petition challenging the Places of Worship (Special Provisions) Act, 1991, which freezes the religious character of a place of worship as it existed on August 15, 1947. The apex court admitted the petition even though its 2019 judgement in the Babri Masjid-Ram Janmabhoomi title suit had celebrated the 1991 Act for bringing a closure to all pending disputes over places of worship.

Consider also the April order of a Varanasi court, which asked the Archaeological Survey of India (ASI) to survey the Gyanvapi masjid for ascertaining whether it had been built over a pre-existing religious structure. The three events – the Mahakumbh, the Supreme Court and the Varanasi civil court’s decisions – convey to Muslims that apart from sharing the misery of COVID-19 with everyone, they must also pay, as always, a price for the misdeeds, real or imagined, of their ancestors.

Indeed, the virus of communalism, like Sars-CoV-2, has started to multiply and mutate. A Mathura court has already been petitioned to order a survey of the Jama Masjid in Agra, and the Shahi Eidgah mosque, Mathura, for determining whether idols of Lord Krishna were buried below these two structures. Unable to locate the mythical Saraswati river, the ASI is now expected to go on a fishing expedition to discover remnants of temples beneath historic mosques.

The ASI’s task will be presumably easy because some Muslim rulers did demolish temples, although nowhere near 60,000 as is claimed. But so did victorious Hindu kings, who would raid the temples of their vanquished rivals and ferret away the deities they patronised, at times shattering the idols and destroying the structures in which they were installed. The endeavour to right the historical wrongs also begs a question: Should those social groups which subjected Dalits to barbaric acts must be made to bear the same ignominy in the present?

Muslims often wonder at the implications of being second-class citizens, as most of them have not read MS Golwalkar, the second chief of the Rashtriya Swayamsevak Sangh. In We or Our Nationhood Defined, Golwalkar says that that the only “sound view of the minorities’ problem” is that they must “merge themselves in the national race [Hindus] and adopt its culture, or [choose] to live at its mercy so long as the national race may allow them to do so…” Until the minorities are asked to quit the country, they can claim “nothing… not even a citizen’s rights”.

Although the RSS has officially disowned Golwalkar’s book, its actions convey the Hindutva brigade’s continuing commitment to his terrifying vision. Indeed, the survey of the Gyanvapi masjid is a tool to torment Muslims into de-culturing themselves, as is also the motive of insulting them almost daily. Read what Vishwa Hindu Parishad joint secretary Surendra Jain said: “Comparing the Kumbh with the Markaz [Tablighi Jamaat headquarters] is like comparing Gangajal with dirty water of drains.” Those wantonly humiliated become desperadoes in their search for equality.

Next Story : A Herculean path ahead