Russian soldier accused of war crime on trial in Ukraine

Vadim Shishimarin is accused of ‘violations of the laws and norms of war;’ he allegedly killed a 62-yr-old 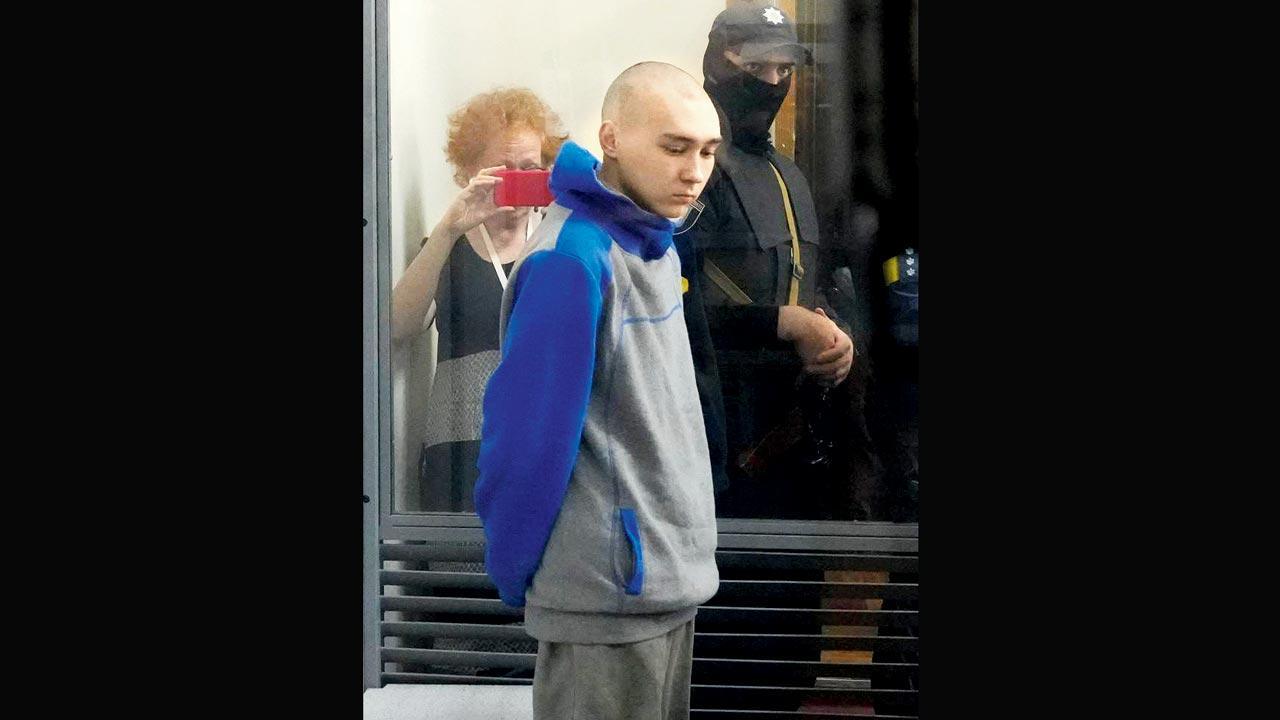 Russian army Sergeant Vadim Shishimarin, 21, is seen behind glass during a court hearing in Kyiv on Friday. Pic/AP


A Ukrainian court is expected on Friday to begin hearing the first war crimes case arising from Russia’s Feb. 24 invasion after charging a captured Russian soldier with the murder of a 62-year-old civilian. The case is of huge symbolic importance for Ukraine. The Kyiv government has accused Russia of atrocities and brutality against civilians during the invasion and said it has identified more than 10,000 possible war crimes. Russia has denied targeting civilians or involvement in war crimes and accused Kyiv of staging them to smear its forces.

The Kyiv district court’s website identified the soldier on trial as Vadim Shishimarin and said he was accused of “violations of the laws and norms of war”. The Ukrainian prosecutor general’s office said the defendant was a 21-year-old soldier in the Kantemirovskaya tank division from the Moscow region. He faces up to life imprisonment over the killing in the northeast Ukrainian village of Chupakhivka, east of the capital Kyiv, on Feb. 28.

Relatives and supporters of Ukrainian fighters in the Azovstal steel plant on Thursday called for fresh efforts to save them as Kyiv said new talks were underway with Moscow on a plan to rescue badly wounded servicemen. Russian forces have been bombarding the steelworks in the southern port of Mariupol, the last bastion of Ukrainian defenders in a city almost completely controlled by Russia after more than two months of a siege.

Civilians had been trapped at the plant and Kyiv says they have all been evacuated. But there is no deal on allowing out hundreds of fighters, some of whom are wounded. “We have started a new round of negotiations around a road map for an (evacuation) operation. And we will start with those who are badly wounded,” Deputy Prime Minister Iryna Vereshchuk told 1+1 television. Vereshchuk said Ukrainian authorities were working with the Red Cross and United Nations, which had both helped with earlier evacuations. “We want a document signed on how an evacuation would take place at Azovstal,” she said, adding that Turkey - which has offered to host talks between the presidents of Russia and Ukraine - was also acting as an intermediary.

EU foreign policy chief Josep Borrell said on Friday the bloc would provide a further 500 millions euros worth of military support to Ukraine and that he was confident a deal could be reached in the coming days to agree an embargo on Russian oil.