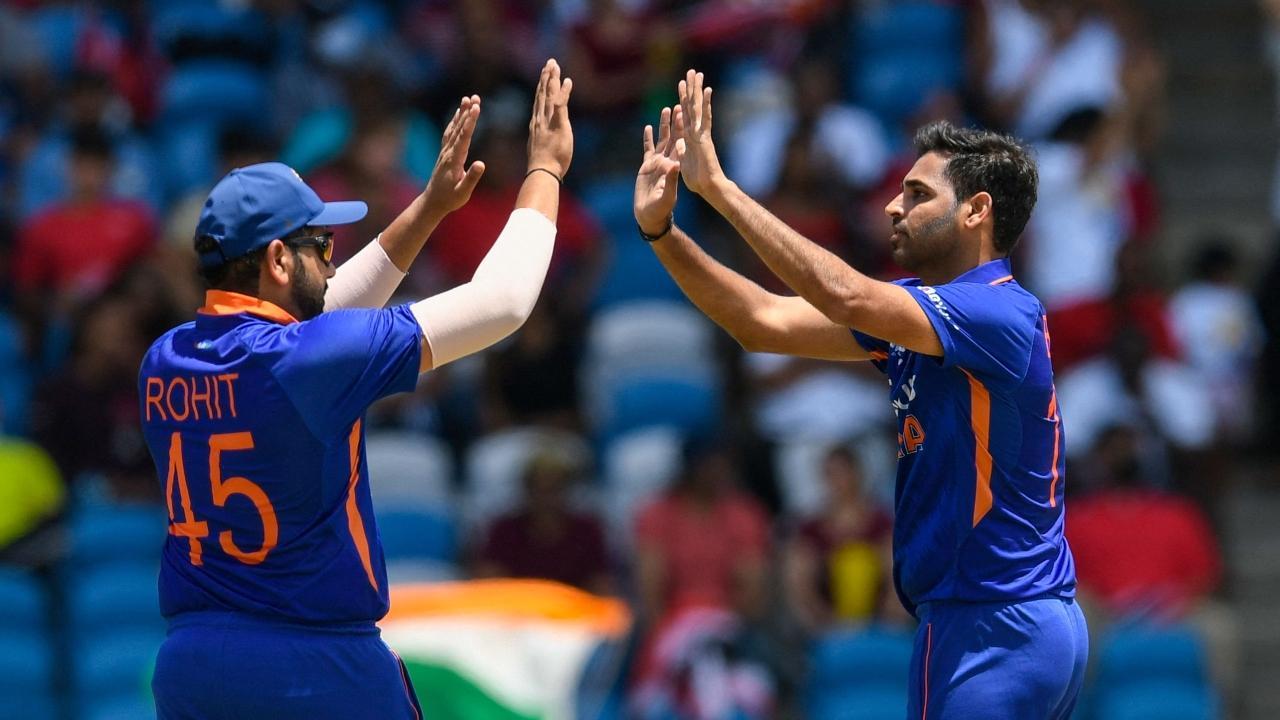 Bhuvneshwar Kumar and Rohit Sharma celebrates the dismissal of Sharmarh Brooks during the 1st T20i match between West Indies and India. Pic/ AFP


India pacer Bhuvneshwar Kumar has attributed the turnaround in his form to hard work, rather than making any changes in his bowling action.

A lot will depend on the 32-year-old bowling stalwart as India aim to win the five-match T20I away series against the West Indies, after having taken a 1-0 lead. The second game of the series will be played in Basseterre later on Monday.

Bhuvi, who is likely to be a key member in India's squad for the ICC T20 World Cup in Australia later this year, when asked if he had made any changes in his bowling action in the last few months, replied that the success was down to hard work.

"Honestly, I didn't make any change to my bowling (action). I just tried to bowl more, which brought my body back into rhythm. It brought back the confidence in me. Fitness is something if you improve, it helps you bowl better. But honestly I didn't make any change in my bowling or worked on any particular aspect. Overall, I just bowled more whenever I got a chance," said Bhuvi, who had a forgettable ICC T20 World Cup in the UAE last year and didn't quite make an impact in the away three-match ODI series in South Africa, which India lost 3-0.

"Of course when you are with the team, you practice, but I also kept working hard on my bowling at home and made an effort to keep myself in rhythm," added Bhuvi in a video posted by BCCI.

The bowler also added he saw tremendous potential in pace bowler Arshdeep Singh, saying it's rare for a young bowler "to think like that". Arshdeep played a pivotal role in India winning the opening T20I against the West Indies at Trinidad on July 29 by 68 runs, taking two wickets for 24 runs.

"The best part is when he (Arshdeep) bowls, he knows what exactly he wants, what field he has to set, how to bowl to a particular batter. It's very rare that a new young bowler thinks like that. I suppose he had that maturity before he came into the India side," opined Bhuvneshwar.

Bhuvi felt the four years Arshdeep has spent with IPL side Punjab Kings had given the tall pacer the maturity and confidence to play for Team India.

"He has been performing so consistently for the last two-three years at the top level. So, he knows what he wants to achieve in the game or in that point in time, which is a big thing. Meticulous planning is his biggest asset," added Bhuvi.

Bhuvi also said the nature of white-ball cricket had changed drastically since the time he made his debut.

"When I started out with white-ball cricket, especially one-day cricket... that time the par score of 300-plus runs was not there. But, now, 300 runs is a par score. That is the biggest change I've witnessed. In T20 also if you make 180-190, teams know it is quite chaseable. These are the noticeable changes.

"As a bowler, I am now more aware of what changes or variations I need against a particular batter, so those are the things that have improved. As the game goes further, more changes, more innovations will happen. The game has evolved big time," he added.

Next Story : Jos Buttler after SA series loss: We cannot dwell on past successes