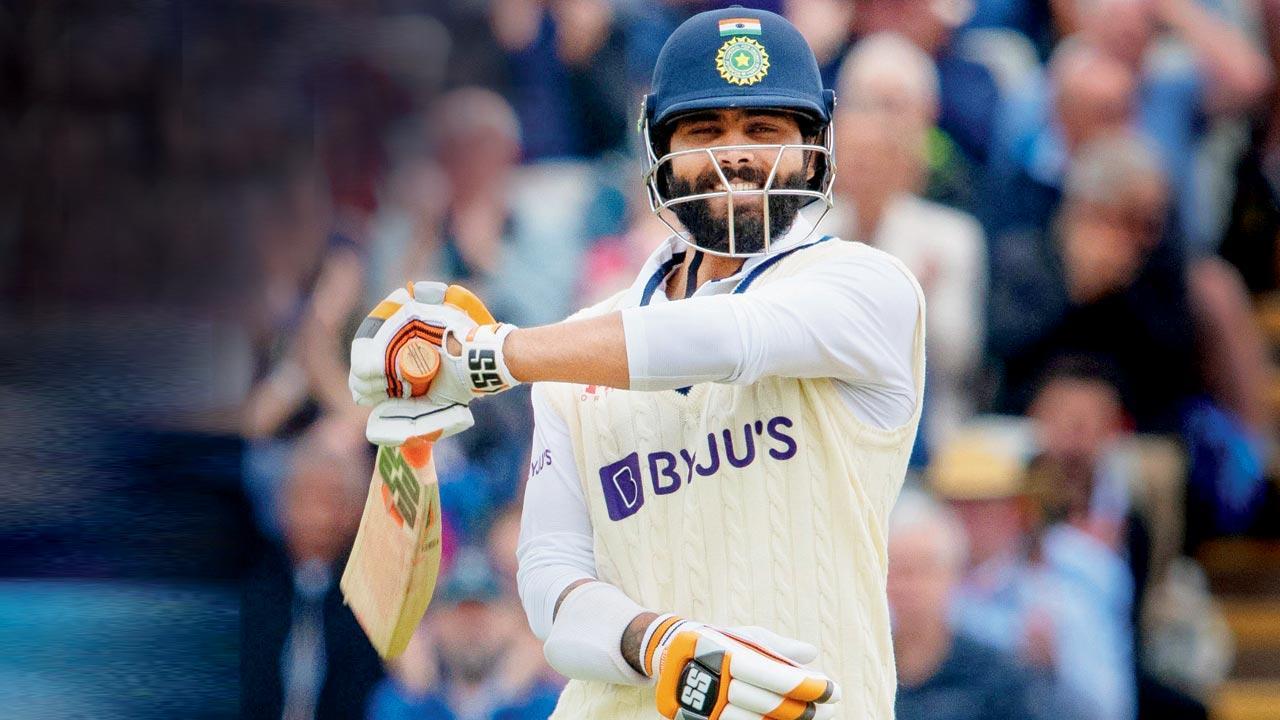 Ravindra Jadeja celebrates his century against England in the fifth Test at Edgbaston. Pic/Bipin Patel


It was another frustrating start-stop-start day in the fifth and final Test at Edgbaston on Saturday.

In the limited time available between showers on the second day, India gained an upper hand as they went well past the 400 mark in the first innings, thanks to a superb century by Ravindra Jadeja and the heroics of skipper Jasprit Bumrah, who collated 29 runs with the bat from one Stuart Broad over. Add to it were six extra runs (five wides and a no-ball) which meant Broad bowled the most expensive over (35 runs) in the annals of Test cricket.

After his heroics with the bat, Bumrah performed his principal job, which is to pick up early wickets. He cleaned up the top three batsmen to have England on the back foot.

He was at his best in overcast conditions as he first got through the defences of Alex Lees and after a rain break, came back and had Zak Crawley caught in the slips. Then came another break and on resumption, Bumrah this time got rid of Ollie Pope.

Thus, when another stoppage for rain came, England were struggling at 60 for three, with Joe Root and Jonny Bairstow there to resume the battle for the home team.

The Indian supporters were looking forward to two milestones, a century by Jadeja and the team getting past the 400-mark. Both targets were achieved with a fair degree of comfort as the clueless English attack lost direction. But the icing on the cake was Bumrah’s assault on Broad, bringing back memories of Yuvraj Singh having hit the same bowler for six sixes during a World T20 game at Durban in 2007.

It was Rishabh Pant who put India in a strong position on the first day, but the contribution of Jadeja cannot be undervalued. The kind of support he gave Pant during their 222-run sixth-wicket stand, the best against England, was indeed the crucial factor that allowed Pant to play his natural, attacking cricket.

His 146 on the first day, was followed up by Jadeja’s 104 on the second day. It was Jadeja’s third Test century and his first outside India. He had made his first at his home ground in Rajkot against West Indies in 2018 and just a few months ago, he remained unbeaten 175 in the first Test against Sri Lanka in Mohali. At that time, many of his fans were not happy with the deceleration, which had prevented him from racing away to a double hundred. Anyhow, Jadeja would be more than pleased with his century under pressure in trying conditions here at Edgbaston, following his fallout with Chennai Super Kings during the IPL which had left him disillusioned.

He can now pick up the threads and probably revive his relations with the CSK. In the last few years, he has been making a solid contribution with the bat. His effective left-arm spin and top-class fielding have made him an integral part of Team India.  As for the match, much will depend on how the weather pans out during the next three days. The third day prediction is also not very bright with chances of rain. But the final two days should be more or less bright for cricket. So, it remains to be seen if India can get the better of the English team in the available time. Anyway, for India, a draw would also be enough to clinch the series.