Raphina went past Hwang In-Beom and entered Korea's box. He tried to give Neymar the ball, but it rolled to Vinicius, who steered a sidefooted shot into the top right of the goal 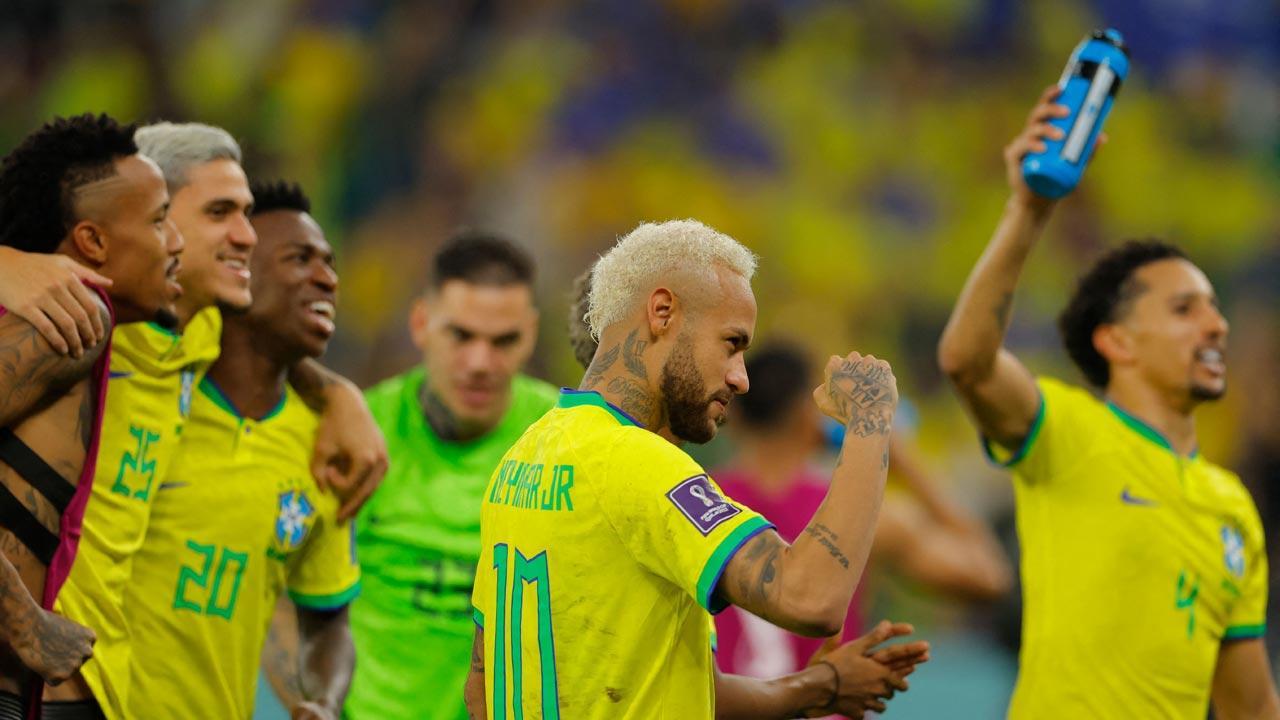 Brazil's forward Neymar (C) celebrates with teammates after they won the Qatar 2022 World Cup round of 16 football match between Brazil and South Korea at Stadium 974 in Doha. Pic/AFP


Goals from Vinicius Junior, Neymar, Richarlison and Paqueta helped Brazil advance into the quarterfinals of the ongoing FIFA World Cup after defeating South Korea by 4-1 in their round of 16 match at Stadium 974, Doha, Qatar on Monday.

Starting off, the action was slow and took place mostly in the mid-field. There was a lot of action in South Korea's half in the opening minutes. In the 7th minute, Vinicius Junior gave Brazil an early lead.

Raphina went past Hwang In-Beom and entered Korea's box. He tried to give Neymar the ball, but it rolled to Vinicius, who steered a sidefooted shot into the top right of the goal.

Richarlison was brought down in the box in the 10th minute. Woo-Young Jung was attempting to clear the ball, but brought down Richarlison in progress. Neymar came to take the penalty in the 13th minute and rolled it in the bottom right corner in the net.

With this goal, Neymar scored his 76th goal for Brazil, just one goal away from leveling the tally of great Pele's tally of 77 goals.

Brazil was off to a fantastic start, leading 2-0 within the first 15 minutes.

Hee-Chan Hwang almost scored one for South Korea for the 16th minute as he came cutting in from left, but Alisson made a brilliant save.

From the 20th-minute mark, both sides made shots at goal, with Neymar and Hwang making attempts for their respective sides.

Hwang tried to score in the 33rd minute, but was once again stopped by the keeper. He got to the byline, went past Militao but failed to convert.

South Korea's miseries just would not stop. In the 36th minute, Lucas Paqueta scored another one for Brazil to make it 4-0, with a stunning finish from the penalty area.

Heading to the half-time, Brazil was just passing the ball amongst themselves and it seemed that all the belief and confidence was sucked out of the South Korean team.

The scoreline read 4-0 at halftime in favor of the five-time champions.

At the start of the second half, South Korea made two changes. Chul Hong and Jun-ho Son replaced Jin-su Kim and Jung Woo-young.

In the 47th minute, Alisson denied a goal to South Korea's Son Jun-ho. After that, South Korea earned two back-to-back corners but could not convert them into goals.

Korea were playing much better in the second half and looked calmer despite sinking hopes of quarterfinal progress.

In the 65th minute, Richarlison almost made it 5-0 for Brazil, but failed. In the 68th minute, Alisson added another one to his collection of stunners from this match, making yet another one-handed save. But the off-side flag was also raised.

Finally, South Korea had something to cheer for in the 76th minute. The unbeatable wall named Alisson was finally breached, as Paik Seung-ho scored a stunner to make it 4-1. A comeback was not on cards, but at least the Asian side could open their account and get some consolation.

At the end of full time, the scoreline read 4-1 in favor of Brazil, who advanced to the quarterfinals. South Korea's run in the tournament came to a terrible end. Brazil enjoyed 55 per cent ball possession while South Korea enjoyed 45 per cent of it.