After his goal against Switzerland took Brazil to the knockouts, coach Tite lauds team’s experienced midfielder for standing up without their icon striker 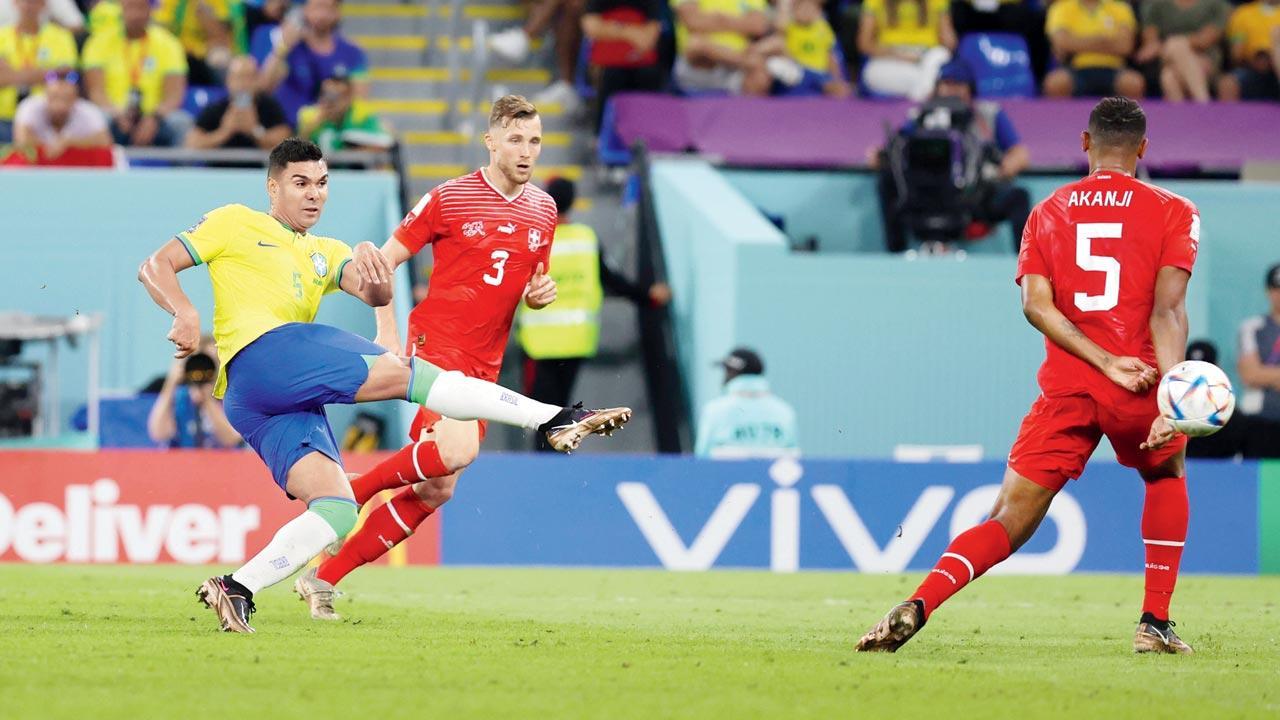 Brazil’s Casemiro (left) scores his team’s only goal against Switzerland in Doha on Monday. Pic/Getty Images

Brazil midfielder Casemiro, 30, has quite a sense of humour, going by the number of clips online of his funny interactions with his national teammates. However, on the field, he is one of the most intense, hardworking and dependable midfielders in world football currently.

On Monday, he scored the only goal of the Group G fixture against Switzerland at Stadium 974.

A day before, he revealed that he and his defensive teammates at Brazil often joke that they “feel sorry for our rivals because we have so much talent in this team that we can replace Raphinha for Antony, Richarlison for Gabriel Jesus… and so on.” Against Switzerland, however, he was irreplaceable. Playing in a defensive midfielder’s role, he ascended at the perfect time and executed a stunning volley to ensure Brazil’s qualification into the second round. Casemiro’s value to the team was aptly summed up by coach Tite, who was not shy of comparing him to the mercurial Neymar. This was our first game without Neymar [out with an ankle injury], but I’ll take it [because] you can choose Casemiro as today’s star. He presents himself as a surprise element from the back. Casemiro being in attack is easy to be flagged, but coming from behind, he will finish a goal. He is the reference for our line of four defenders. He’s the one who does the game-management. Offensively, he gives short support to the other two midfielders [Lucas Paqueta and Fred]. And one of his virtues is this medium distance shot, which can be a ifferentiator. Casemiro is world-class in the defensive midfield position,” said Tite at the post-match press conference.

Hailed as the best

When informed that Neymar had just tweeted that Casemiro is the best midfielder in the world currently, Tite said, “I agree with Neymar.”

The man himself however, preferred to credit his defender colleagues for the win. Such was Brazil’s defence, led by skipper Thiago Silva, that Switzerland failed to register even one shot on target. “Our defence is way more experienced. This was yet another game where we did not concede a goal. And I’m not just referring to goalkeeper Alisson [Becker] but our four-man defensive line [Alex Sandro, Silva, Marquinhos and Eder Militao with Casemiro in front of them]. I like to help my teammates at the back to ‘put out the fires’. My main objective is to defend, however, if I have the opportunity to sneak up front, it’s important that I take it.” He sure took it very well on Monday!