Rashford displayed his superb football skills in the 68th minute as he went past a group of Welish defenders to score his second goal of the match, piling on the agony for Wales 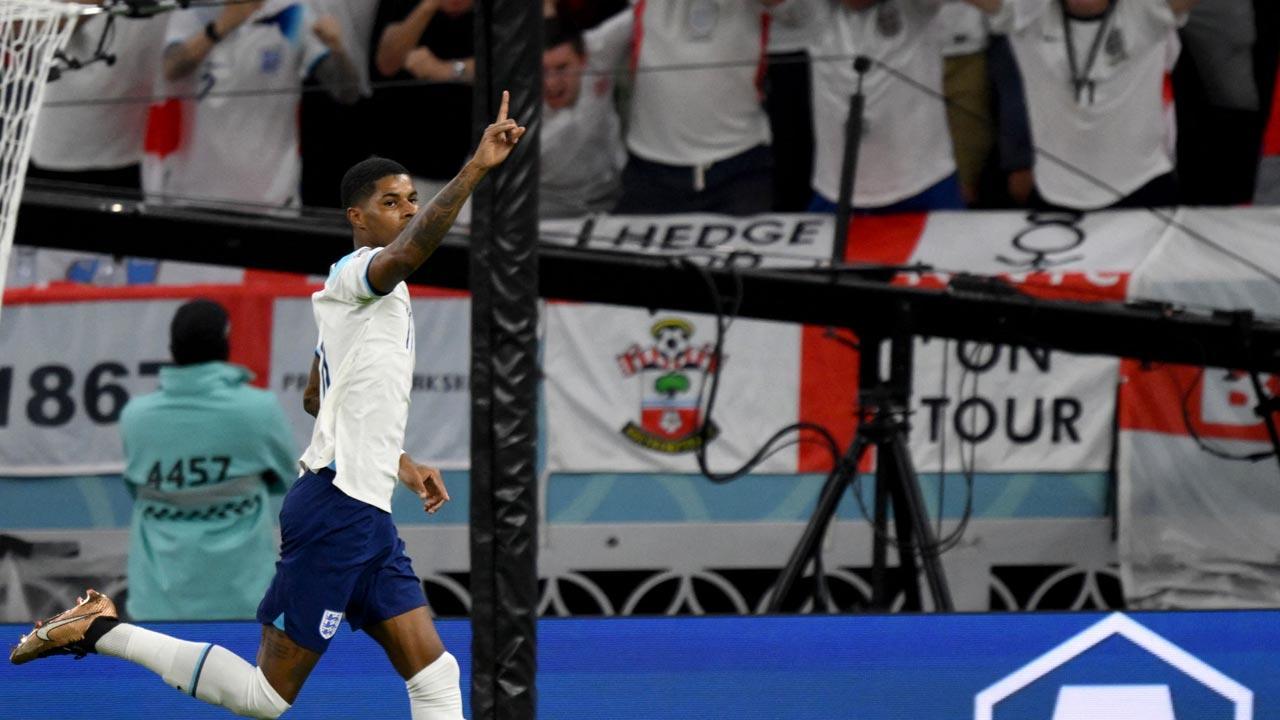 England's forward Marcus Rashford celebrates scoring his team's first goal from a free-kick during the Qatar 2022 World Cup Group B football match between Wales and England at the Ahmad Bin Ali Stadium in Al-Rayyan. Pic/AFP


Marcus Rashford's scored a brace to guide England to a thumping 3-0 victory over Wales at the Al-Rayyan Stadium in a Group B clash on Wednesday.

Wales' first-ever World Cup campaign in 64 years ended with a defeat as England is set to face Senegal in the round of 16 encounters.

England came out all guns blazing in the second half and found the back of the net through Manchester United star Rashford in the 50th minute of tyhe game. The forward delivered a perfect freekick as he managed to get past the Wales goalkeeper with the perfect trajectory on the ball.

Foden dealt another blow in the 52nd minute as he tapped the ball into the goal after receiving a beautiful cross from England captain Harry Kane.

Rashford displayed his superb football skills in the 68th minute as he went past a group of Welish defenders to score his second goal of the match, piling on the agony for Wales.

The English team hardly dropped a beat after the third goal as they went on to clinch the game, knocking Wales out of the 2022 FIFA World Cup.

The English team enjoyed great possession but were unable to find the back of the net with several changes gone begging. Wales never really found their stride as they sat back in their half with England mounting pressure on them.

England made several passes initially, becoming familiar with the ball. Marcus Rashford attempted to enter the Welsh box from the left but lost control of the ball at the edge to lose possession.

With a brilliant through ball, Harry Kane put Rashford in a one-on-one situation with the Welsh goalkeeper in the 10th minute. However, Daniel Ward advanced forward and denied the Manchester United forward's chip.

Rashford was clearly the best player for the English team as he kept creating chances for his team and looked most likely to score. A powerful strike from Rashford hit Welsh player Neco Williams in the face the defender went down and was given some medical attention.

He was substituted in the 34th minute and a concussion substitute replaced the Welsh defender. The player received a standing ovation from the Welsh supporters as he dragged himself off the pitch in what was probably the biggest game of his career. Connor Roberts replaced Williams as things looked downhill for Wales.

Wales had a throw-in in the final second of the first half extremely close to the England box. Joe Allen received it on the edge of the box after Roberts passed it to Mepham. Joe Allen reaches for it, and the ball barely misses the England goal as it flies over it.

Both teams failed to score as the half ended without a goal, with Wales struggling to keep possession.