The Russia 2018 runners-up held their nerve and won the penalty shootout 3-1 as Livakovic kept out the first two efforts before stopping Maya Yoshida's kick, then Mario Pasalic converted the vital effort to take his side through 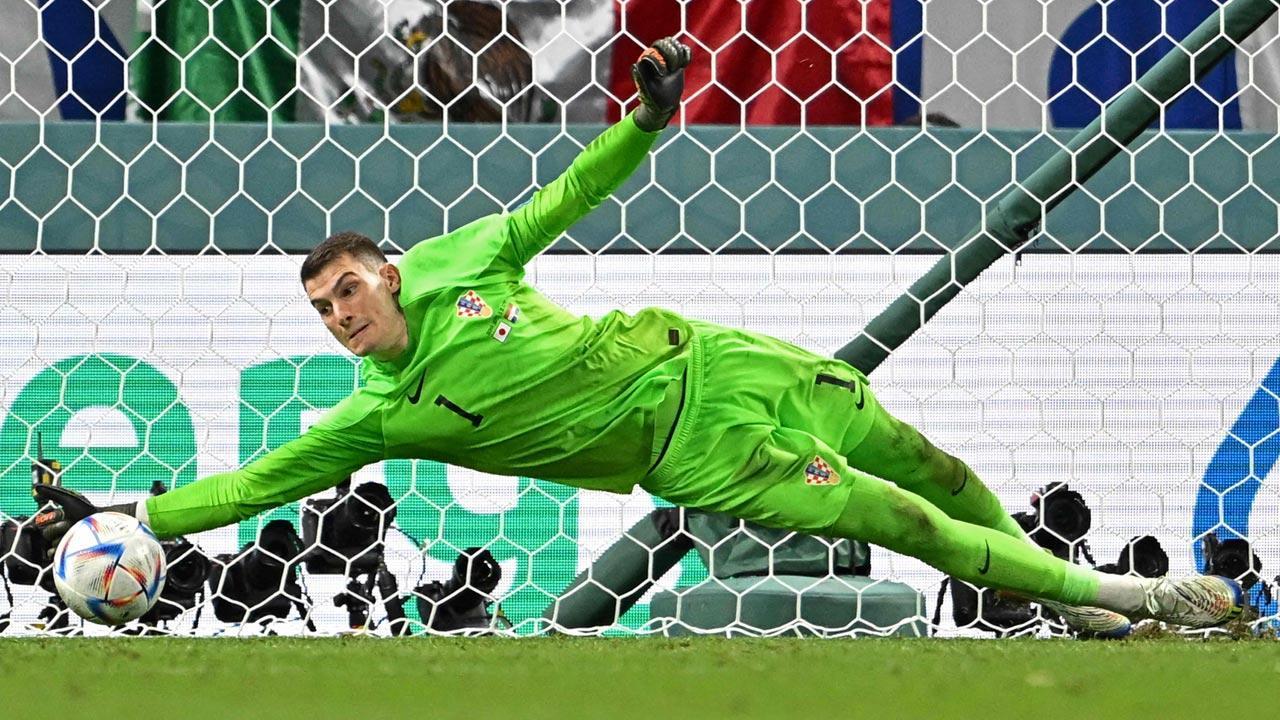 Croatia's goalkeeper #01 Dominik Livakovic saves a penalty from Japan's forward #09 Kaoru Mitoma during the Qatar 2022 World Cup round of 16 football match between Japan and Croatia at the Al-Janoub Stadium in Al-Wakrah. Pic/AFP


Goalkeeper Dominik Livakovic was the hero, saving three penalties in the shootout, as Croatia edged past Japan after a 1-1 draw to reach the FIFA World Cup quarterfinals at Janoub stadium.

The Russia 2018 runners-up held their nerve and won the penalty shootout 3-1 as Livakovic kept out the first two efforts before stopping Maya Yoshida's kick, then Mario Pasalic converted the vital effort to take his side through.

At the end of full-time play, the teams were locked one-all and the 30 minutes of extra time also failed to break the deadlock.

Croatia will take on the winners of Monday's late match between Brazil and South Korea in the quarterfinals.

On Tuesday, the last round matches of the last-16 stage will take place between Morocco and Spain followed by Portugal and Switzerland.

The Samurai Blue started badly in the penalty shootout with Takumi Minamino and Kaoru Mitoma unable to beat Livakovic, while Marko Livaja's effort hit the post, it did not make much of a difference as Livakovic proved outstanding in the Croatian goal.

Earlier, Croatia came back from a goal down to draw level through Ivan Perisic. The 33-year-old's 55th-minute equaliser was his sixth goal at the World Cup and the first one in Qatar taking his individual tally of international goals to ten.

The Tottenham Hotspur striker, currently playing in his third World Cup, is now tied with Davor Suker as the top goal-scorer at the World Cup, which he scored in the 1998 and 2002 World Cups.

Japan proved beyond any reasonable doubt that they are capable of giving any side a strong game and looked dangerous on the break.

The Europeans have had more possession and an equal amount of shots on target as the Japanese in the first half.

Japan were the livelier side and took a deserved lead two minutes before half-time when Celtic forward Daizen Maeda wherein a whipped cross bounced around in the box and fell to Maeda, who got to the end of the cross to give Japan the much-deserved lead.

Ten minutes after the resumption, Croatia equalized when Perisic unleashed a brilliant powerful header, off Dejan Lovren's cross, into the bottom corner with incredible precision.

Though the official match attendance stood at 42,523 in the nearly 45,000-capacity arena, there were some empty seats in some of the upper tiers of the venue, but the noise made by both teams made it feel like the arena was packed to the brim.

Thereafter, neither side could find a breakthrough and the game ticked into the additional 30 minutes of extra time, with Brighton midfielder Mitoma's spectacular strike pushed over by Livakovic.

At the other end, Marko Livaja's flicked header looked to be looping in, but Shuichi Gonda managed to gather and Lovro Majer dragged a shot in the 120th minute.

The contest went to nerve-shredding penalties, where Livakovic emerged as the man to lead Croatia's celebrations.

Next Story : FIFA World Cup 2022: Brazil move to quarterfinals, thrash South Korea 4-1 in round of 16 match