At the Khalifa International Stadium, all three goals came from players based in England. Senegal, ranked 18 on the FIFA ranking computer went into the lead in the 44th minute through Watford's Ismaila Sarr penalty conversion and went into the half time break leading 1-0 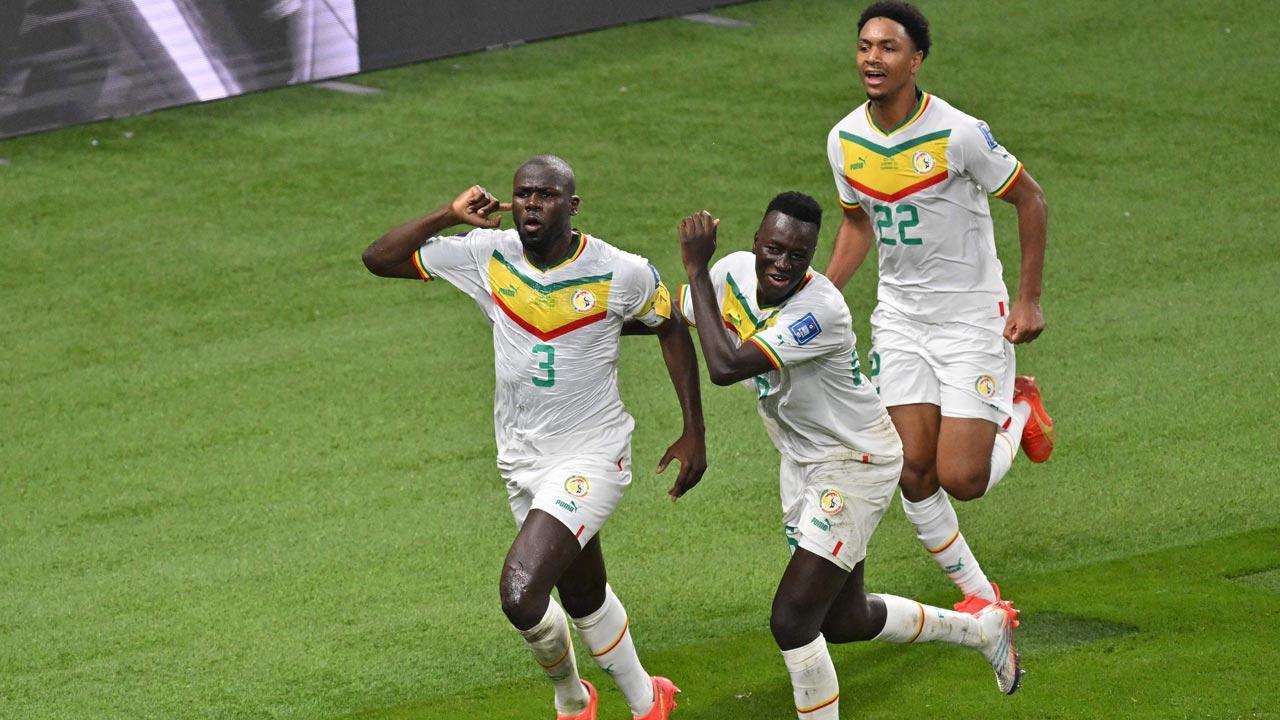 Senegal's defender Kalidou Koulibaly celebrates with teammates after scoring his team's second goal during the Qatar 2022 World Cup Group A football match between Ecuador and Senegal at the Khalifa International Stadium in Doha. Pic/AFP


A match winner from Kalidou Koulibaly helped Senegal over the challenge of Ecuador 2-1 in the Group A match of the FIFA World Cup and to qualify for the knockout stage.

At the Khalifa International Stadium, all three goals came from players based in England. Senegal, ranked 18 on the FIFA ranking computer went into the lead in the 44th minute through Watford's Ismaila Sarr penalty conversion and went into the half time break leading 1-0.

In the second half, Ecuador, ranked 44, hit back through Brighton midfielder Moises Caicedo in the 67th minute to draw level. The lead lasted for just three minutes with Chelsea defender Kalidou Koulibaly scoring Senegal's second goal of the match to give the lead to the African Cup of Nations champions.

The Lions of Teranga, thus will make it to the last 16 of the World Cup for the first time in 20 years.

The African champions, who are in Qatar without Idrissa Gueye and Sadio Mane, are to meet Group B winners, the group which consists of England, USA, Iran and Wales. The last round matches of the group B take place on Tuesday with Iran taking on USA and Wales meeting England in the 'local derby'.

Senegal, which lost to The Netherlands 2-0, finished their league engagements with six points with two wins and one loss to finish second in the group behind leaders Netherlands. The Europeans completed their league engagements with two wins and one draw, recording identical 2-0 wins over Senegal and Qatar. Their only draw came against Ecuador 1-1.

Senegal first win in the group came against hosts Qatar, while Ecuador had started the proceedings in the 29-day tournament with a 2-0 win over the hosts, and then drew with the Netherlands and lost their last match, to finish third with four points

Hosts Qatar finished at the bottom of the table losing all their matches and conceding seven goals and scoring one goal, the worst record for the World Cup hosts. The hosts' only goal of the tournament came in 3-1 loss to Ecuador.

The hosts, who never featured in any of the editions of the World Cup but were playing in the current championship on account of being hosts thus joined South Africa as the only hosts which did not make it beyond the first round.

Senegal and Netherlands now join Portugal, Brazil and France into the last 16 stage.

Ecuador, which had played with freedom and creativity in their opening two matches to leave themselves needing only a draw to reach the last 16, paid the price for a passive display. The vibrancy of their earlier performances was nowhere to be seen under the pressure of protecting what they had. Ecuador flopped on the promise of the opening match with Enner Valencia unable to revive himself one last time.

Senegal spurred on by an almost non-stop drumming from their supporters and knowing they needed to win, were uninhibited by contrast.

Aliou Cisse's side controlled the first half. Senegal found swathes of space in and around the Ecuador area early on as the South Americans began on a shaky note but Idrissa Gueye and Boulaye Dia both failed to finish off the opportunities that came their way and ended up shooting wide.

Senegal did not have to wait for long as the breakthrough goal came when Angelo Preciado and central defender Felix Torres misjudged the flight of a long ball out of the Senegal defence. Sarr read it perfectly.

The Watford winger muscled in ahead of Torres on the left and took one touch inside the area before being clattered by a clumsy challenge from centre-half Piero Hincapie. French referee Clement Turpin immediately pointed to the spot and Sarr, who had missed his two previous penalties at club level, stroked a confident penalty inside the bottom left corner with Ecuador goalkeeper Galindez rooted to his line.

At the end of first half, Ecuador's Argentinian coach Gustavo Julio Alfaro brought in three changes taking out Carlos Gruezo and replacing him with Jose Cifuentes, Alan Franco making way for Jeremy Sarmiento and Michael Estrada going out and Djorkaeff Reasco taking his place on the turf.

Thereafter, he brought in Jackson Porozo for Angelo Preciado as the South American side tried all combinations to break into the rival defense in pursuit of the equalizer.

On the other hand, Senegal coach Aliou Cisse also brought in a fresh pair of legs in the 74th minute to keep Ecuador at bay with Iliman Ndiaye making way for Cheikh Dieng and Pathe Ciss taking over from Nampalys Mendy.

The introduction of Cifuentes and Sarmiento sparked an immediate improvement for Ecuador and, for the first time in the game, Senegal were on the back foot for a sustained spell.

The equaliser came off a set piece situation. Gonzalo Plata's delivery was met by a header from Torres and fell to Caicedo, left completely unmarked at the back post and kept onside by Sabaly standing on the goal-line at the opposite post. The Brighton midfielder tucked away a simple finish and the Senegal drums fell silent. But they were beating again within two minutes.

Ecuador's moment of triumph quickly turned to despair when Gana Gueye swung a free-kick into a crowded Ecuador penalty area. The ball struck Ecuador's goalscorer on the thigh and looped up for Koulibaly to restore Senegal's precious lead with a close range volley beyond GalIndez.

Senegal were able to hold on to their own amid a nervy six minutes of stoppage time to finish as runners-up in Group A, with Koulibaly's first international goal sending the Africa Cup of Nations' champions to the last 16 stage.

Referee Clement Turpin kept the proceedings under control by showing the yellow card to Idrissa Gana Gueye of Senegal in the 66th minute.