Saurav Gurjar talks about his acting stint in the Mahabharat, his transition to WWE and his love for Sanjay Dutt's movie Vaastav. 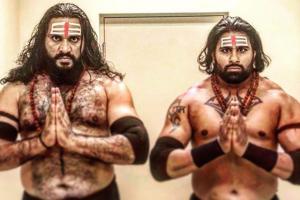 
WWE NXT talent from India, Saurav Gurjar, talks to mid-day.com about his childhood, his love for Sanjay Dutt and his relationship with fellow WWE NXT talent Rinku Singh.

How did you develop an interest in WWE? Did you watch WWE in your childhood?
In my town during my childhood, all the kids were crazy about WWE and I was one of them. I did not have a TV in my house during those days, so I used to visit my neighbour’s house every Sunday to watch the weekly action. It was then that I knew I wanted to become a WWE superstar myself, but didn’t know how I would reach there.

What sports did you play in your childhood?
There were not too many sports facilities in my town where I grew up, so like the rest of the kids, I used to play a bit of cricket. But after I passed my Std 12, I started training professionally in kickboxing. I won various competitions in kickboxing as well but my ultimate goal was to train myself in mixed martial arts so that I could become a WWE superstar one day.

You have had a stint in Indian TV mythological TV shows, how did you get into acting?
I was approached by a production house which used to make Mahabharat. They saw my profile on Facebook, contacted me and pitched me a role. I had no experience in acting, but my look suited the role perfectly and everything went well from there.

What inspired you to switch careers and become a become a professional WWE NXT talent?
Actually, it was a very big decision for me. My family was unhappy when I told them that I am quitting acting for the WWE because I was doing well in life, I was getting other acting offers, shows etc, but somewhere in my heart there was something missing and I still wanted to live my dream of becoming a WWE superstar. With WWE I knew I could become a global icon as people from 180 countries watch WWE, so I left everything and came here.

What do you aim to achieve from your WWE career?
My immediate aim is to win the WWE Championship as soon as I can and come back to India with the belt.

What kind of relationship do you share with fellow WWE NXT talent Rinku Singh?
Before coming to the WWE, Rinku and I did not know each other, we started talking at the tryouts and then Rinku supported me a lot as he is already settled in the US since the past 10 years. He helped me in understanding the American culture and taught me the language and we slowly developed a relationship and now we have become like brothers. We now live in the same house, travel in the same car, and spend most of our day together.

What does your daily diet consist of?
Actually, the last year has been very difficult for me as I am a vegetarian and it is almost impossible to find veg food in the US. I have a lot of almonds, rajma, soybeans in my food.

Favourite Bollywood movie and actor?
My favourite movie is Vaastav and my favourite actor is Sanjay Dutt. I am a fan of his height, build and walking style. I used to copy Sanjay Dutt's walking style at home and used to get beaten up by my dad.

Any message to youngsters in India who want to get into WWE like you?
Indian youngsters are very lucky at the moment as WWE is going to have its tryouts in India. I would also like to advise the Indian youth not to take any shortcuts in bodybuilding and training as it could lead to long term problems. Just stay focused and work hard.

Next Story : Roman Reigns is back in the WWE, updates fans on battle with leukemia