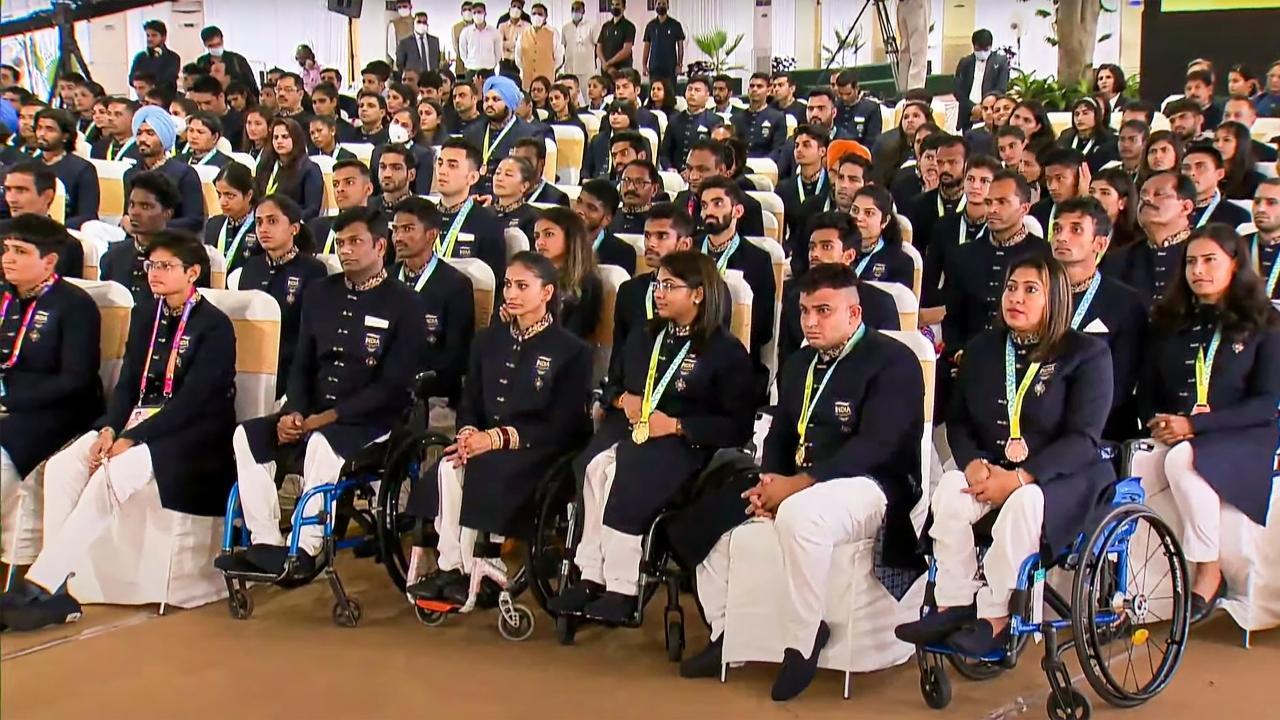 Members of the Indian contingent for the Commonwealth Games 2022 during their interaction with Prime Minister Narendra Modi. Pic/ PTI


Prime Minister Narendra Modi on Saturday hosted the Commonwealth Games 2022 Indian contingent at his residence and praised the contribution of the athletes in making the country proud.

India finished 4th in the medal tally winning a total of 61 medals at the CWG 2022, including 22 gold medals, 16 Silver and 23 Bronze medals.

"I am happy that all of you have taken time out of your schedule to come to meet me at my residence as members of the family. I, just like all other Indians, feel proud to be talking to you. I welcome you all," PM Modi said.

"This is just the beginning for our Yuva Shakti...the Golden age of Indian sports has just begun! In the past few weeks, nation recorded two major achievements in field of sports. Besides historic performance in CWG, for the first time country hosted Chess Olympiad," he added.

"The country not only successfully hosted (Chess Olympiad) but continuing its rich tradition in Chess, gave its best performance. I also congratulate all players who participated and those who won medals at the Chess Olympiad," PM said.

Achieving 61 medals this time around holds a lot of significance since the shooting, which is India's most successful discipline historically with 135 medals, was not included in the games this time. The numbers could have been way higher had it been included.

"Before commencement of #CommonwealthGames, I had told you & promised you in a way that when you come back we'll celebrate 'Vijayotsav' together. I was confident that you'll come back victorious, I had also thought of meeting you even if I would be busy & celebrate Vijayotsav," said PM Modi during the interaction with the CWG 2022 Indian contingent.

The Indian contingent also saw some first-time medals like in lawn bowls and cricket. Notably, the women's cricket team was sent as a part of the contingent. India lost to Australia by a narrow margin of nine runs in a thrilling final.

"Compared to last time, this time we paved our way to victory in 4 new sports. There was an unprecedented performance-from Lawn Balls to Athletics. With this, the interest of youth in new sports will increase. We have to further improve our performance in these new sports," he said.

India dominated contact and strength-based sports of weightlifting, wrestling and boxing. The country's contingent won 12 medals in wrestling, its most successful sport in the 2022 edition of the multi-sport event. India captured medals in every category in which its stars wrestled. This includes six gold medals as well by Bajrang Punia, Ravi Dahiya, Deepak Punia, Sakshi Malik, Vinesh Phogat and Naveen.

India's hockey teams also returned home with medals. The men's team won silver while the women's team is coming back home with a bronze.

The Squash contingent also returned home with two bronze medals. Saurav Ghosal won one in men's singles while the other in mixed doubles with Dipika Pallikal.

The Commonwealth Games 2022 came to an end with a stunning closing ceremony at the Alexander Stadium in Birmingham on Monday.

Next Story : Sunday race selections: Watch out for Enigma