I am still only 70-80 per cent: CWG gold medallist Bajrang Punia

Bajrang Punia says he is trying to get back to peak form and fitness before World C’ships after clinching his second CWG gold; Sakshi Malik and Deepak Punia also earn top honours 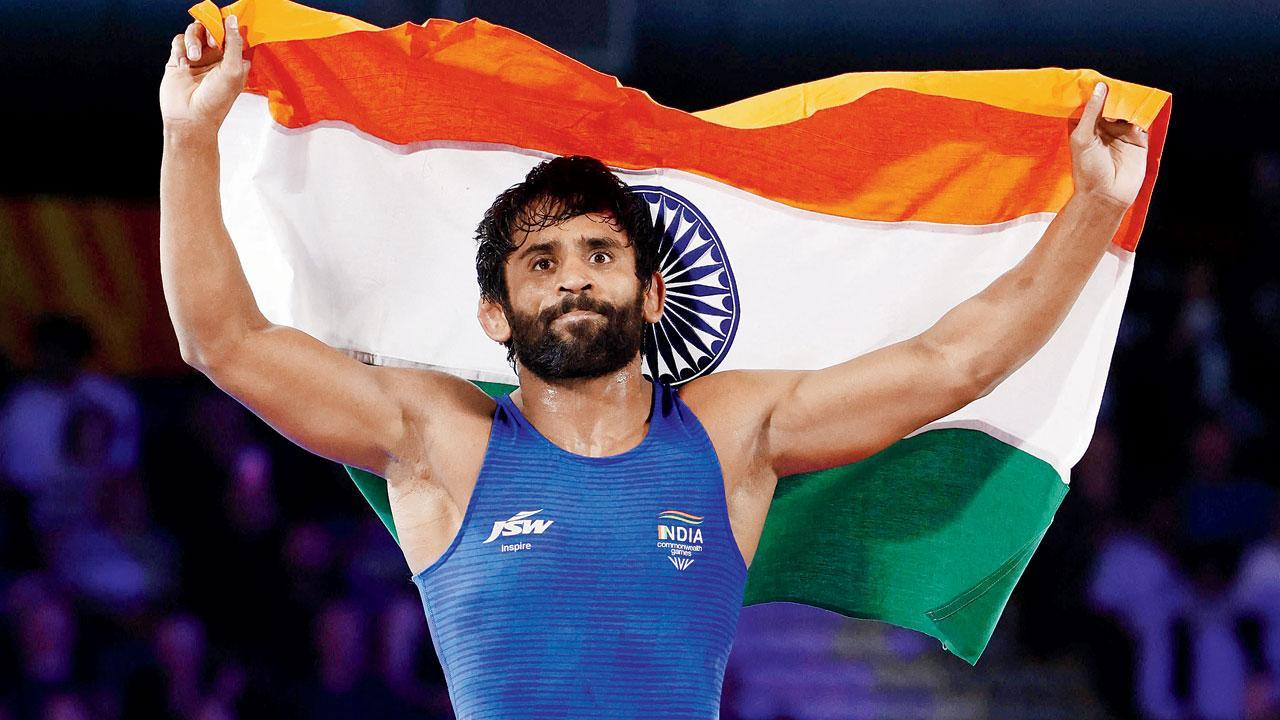 Bajrang Punia celebrates his win over Lachlan McNeil in the 65kg wrestling final to clinch gold at Coventry Arena on Friday. Pics/AFP, PTI


Late in the night on Friday as fans were glued to their TV sets, the Indian matmen found a gold mine at the wrestling venue in Coventry Arena. They picked their best single-day haul of the Commonwealth Games with three gold, one silver and two bronze. The best part of the day was that every one of the six wrestlers on view in the six categories, three each in men and women, that were contested during the day, came back with a medal.

The three gold medallists for India were Bajrang Punia (65kg), picking his second gold and third CWG medal, Sakshi Malik (62kg) completing a set of three medals, one of each in three appearances at CWG and Deepak Punia (86kg) made his debut a golden one. Another CWG debutant Anshu Malik (57kg), one of the four wrestlers to enter the final on the first day, lost her final to Nigeria’s Odunayo Folasade Adekuoroye. 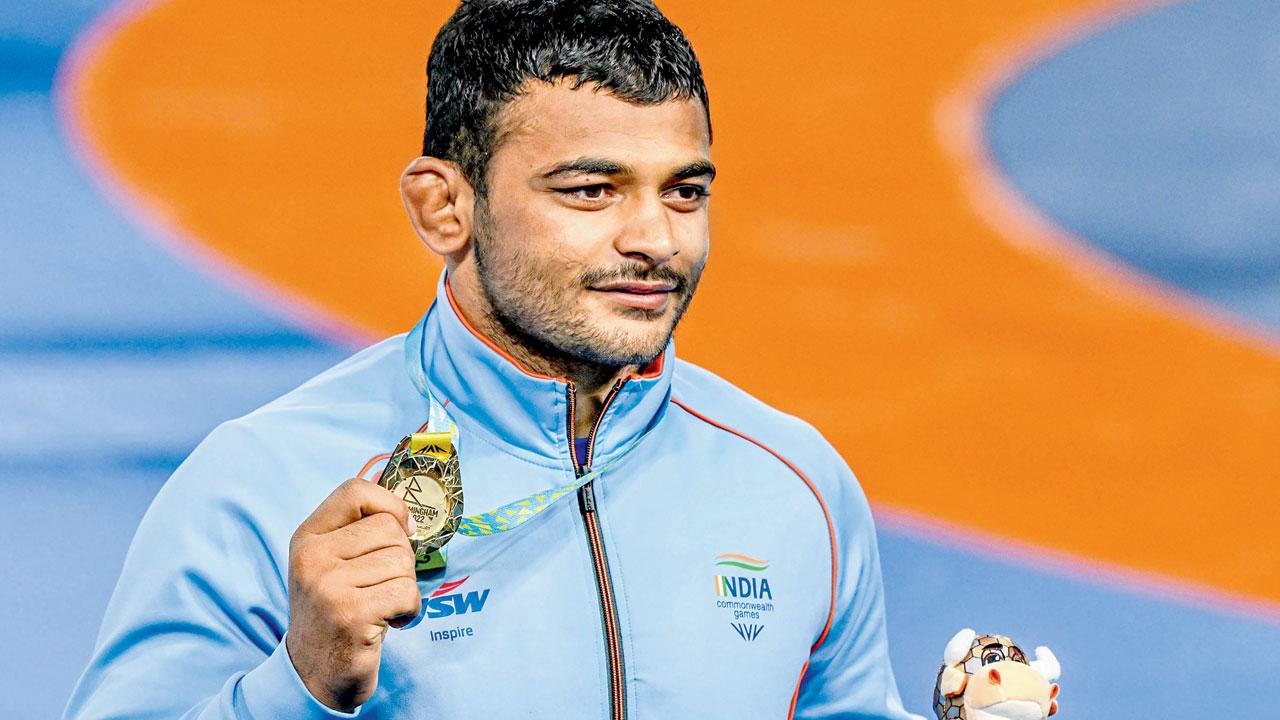 Divya Kakran (68kg) and Mohit Grewal (125kg) picked up a bronze each. Anshu lost to a highly-experienced Odunayo Folasade Adekuoroye to settle for silver. It was the Nigerian’s fourth CWG medal and the last three have been gold, all at the expense of Indians—Lalita Sehrawat in 2014, Pooja Dhanda in 2018 and now Anshu.

I gave it my all: Anshu

Anshu, silver medallist at the 2021 World Championships, was disappointed. “Maybe I could have attacked more in the first round like I did in the second round. In the last few minutes, I went for an all-out approach. I had lost to her in Italy in 2020, but it was much closer this time. I came here for gold and I gave it all,” she said. 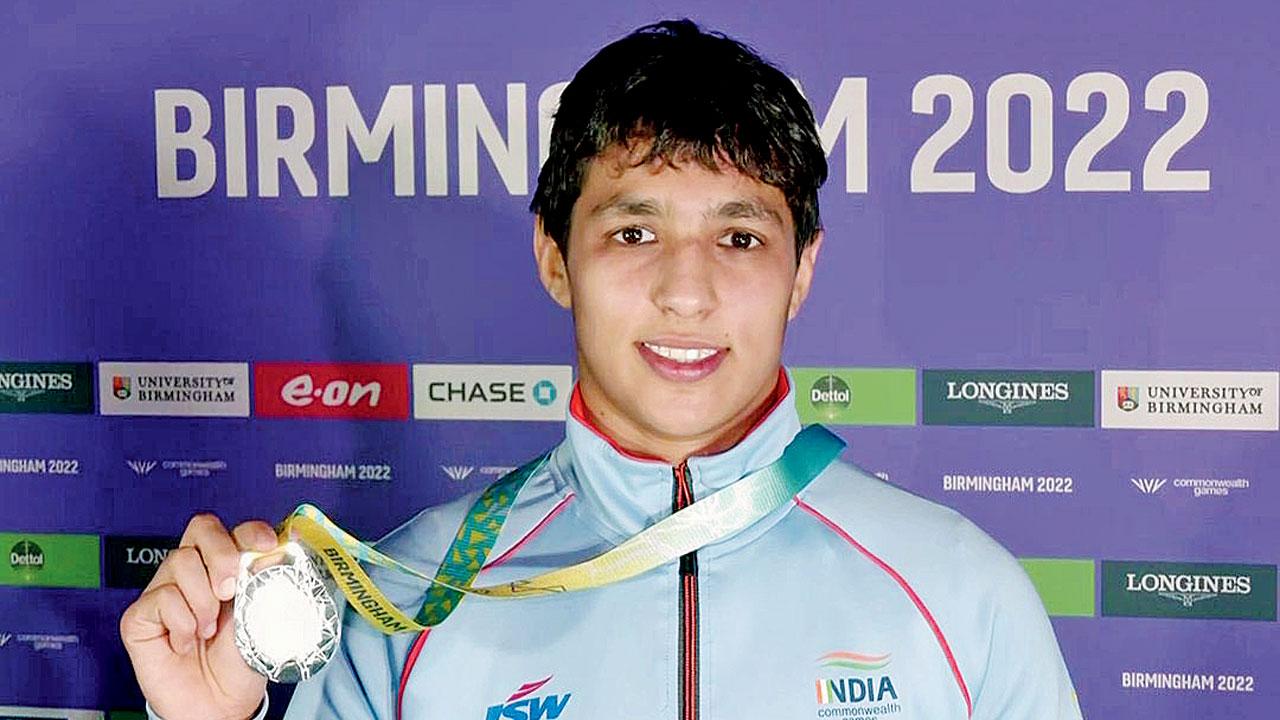 Bajrang, one of India’s most successful wrestlers, turned in a super performance in an aggressive manner, indicating that he is coming back to his best. Bajrang, now a three-time CWG medallist with last two being gold, is also an Olympic medallist in Tokyo, besides which he has one silver and two bronze from World Championships and a gold and silver from Asian Games.

“I was aggressive because I want to win well, but also at the same time, my defence is strong. Since Tokyo, my performance has been up and down because of injuries. Now, I am getting back to form and fitness and training well,” Bajrang said. 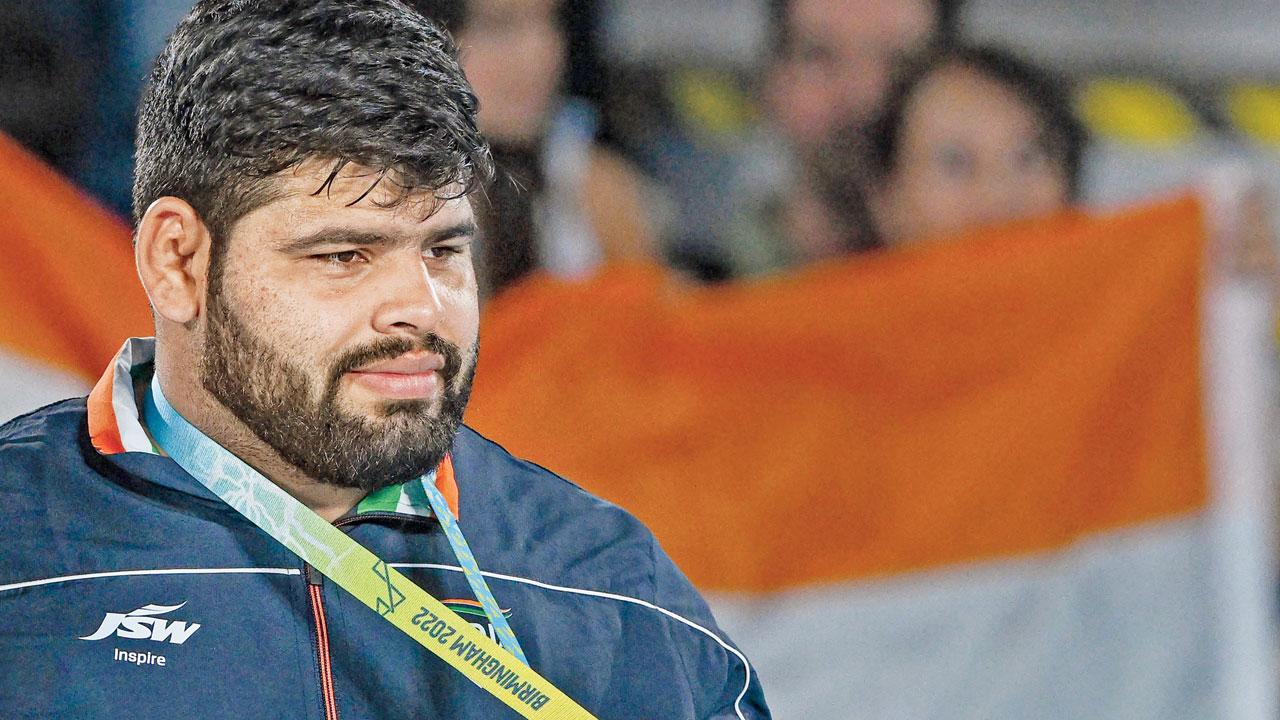 “I’m still only 70-80 per cent to where I want to be. I am looking forward to continuing to work hard and fully achieve it during the World Championships. I also want to do well at the Asian Games and qualify for Paris in 2024, and bring a gold from there,” he added.

Sakshi, India’s first woman to win a wrestling medal at the Olympics, has had a silver (2014) and a bronze (2018) from CWG and the latest gold completes a set for her. Initially, she was trailing, but then found something extra in the second period and noticing a weak spot in her opponent’s defense, she won by a Fall against Canada’s Ana Gonzalez, who is the 2021 World U-23 champion. 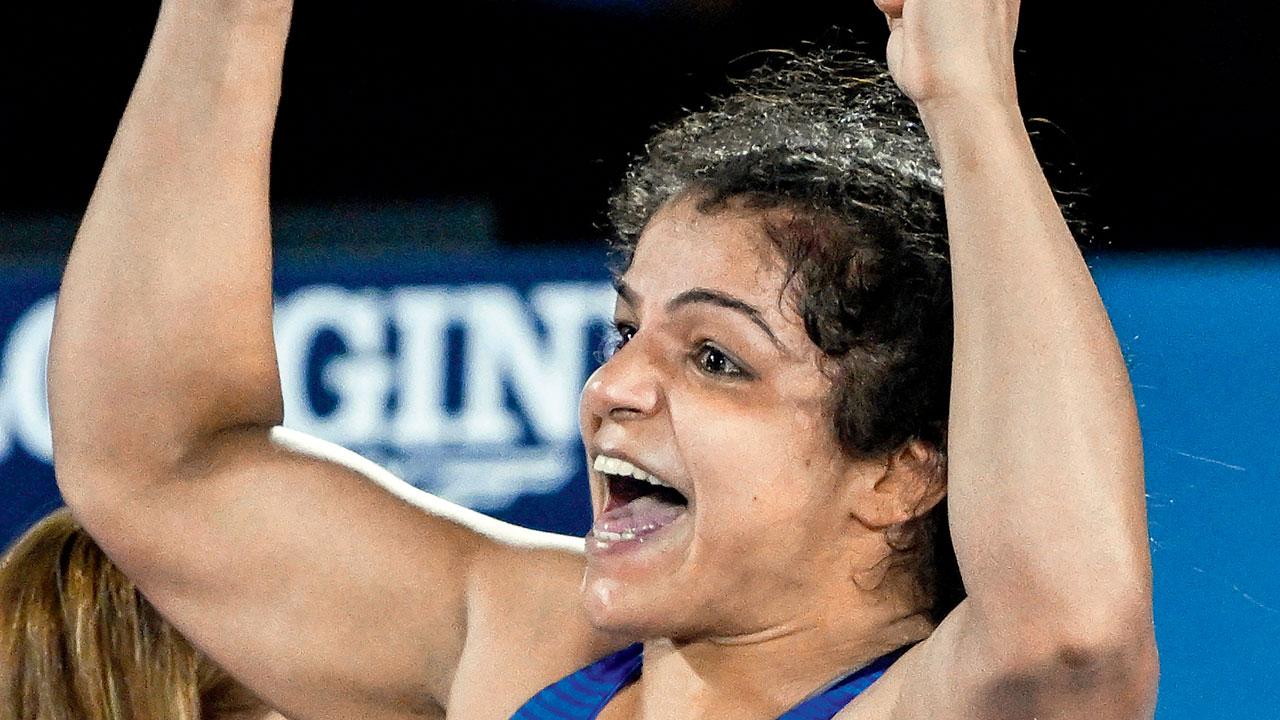 “I kept telling myself that there will be ups and downs. That is the way it is in wrestling. If I lost, I thought it could be my last CWG, but I wanted to win the gold. I had won matches earlier with seconds left in the Olympics and here I had three minutes. So I just wanted to fight till the end,” said an emotional Sakshi. 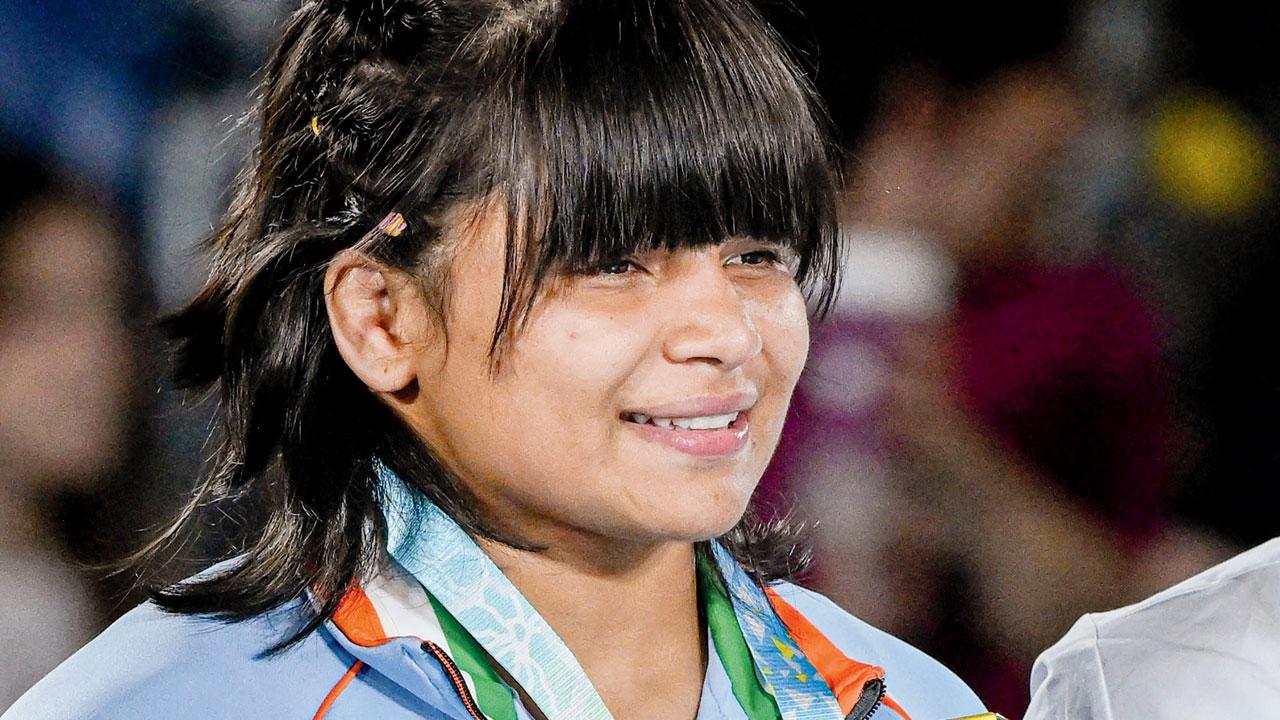 Armyman Deepak did not let any pressure get to him as he took on the defending champion Mohammad Inayat Imam from Pakistan. “For me, this was just another fight. I don’t look at anything else. I am focused on the contest. It was a good fight and I am glad I could win the gold in my first Commonwealth Games,” said Deepak, 23, who after an early 30 lead, had his rival down with a Fall.

Phogat in line for gold, Dahiya eases into final

Putting aside the mental and physical struggles that pegged her back, an intimidating Vinesh Phogat pounced on her rivals to put herself in line for a hat-trick of CWG gold medals while the formidable Ravi Dahiya too cruised into the final, here on Saturday. Tokyo Games silver medallist Dahiya won both his bouts—against NZ’s Suraj Singh and Pakistan’s Asad Ali—by technical superiority. Also fighting for gold is Naveen (74kg).