"I needed to stay composed and focus on the goals," Swiatek was quoted as saying by WTA. "It's New York -- it's so loud, it's so crazy. It's really mind-blowing for me. I'm really proud I could handle it mentally" 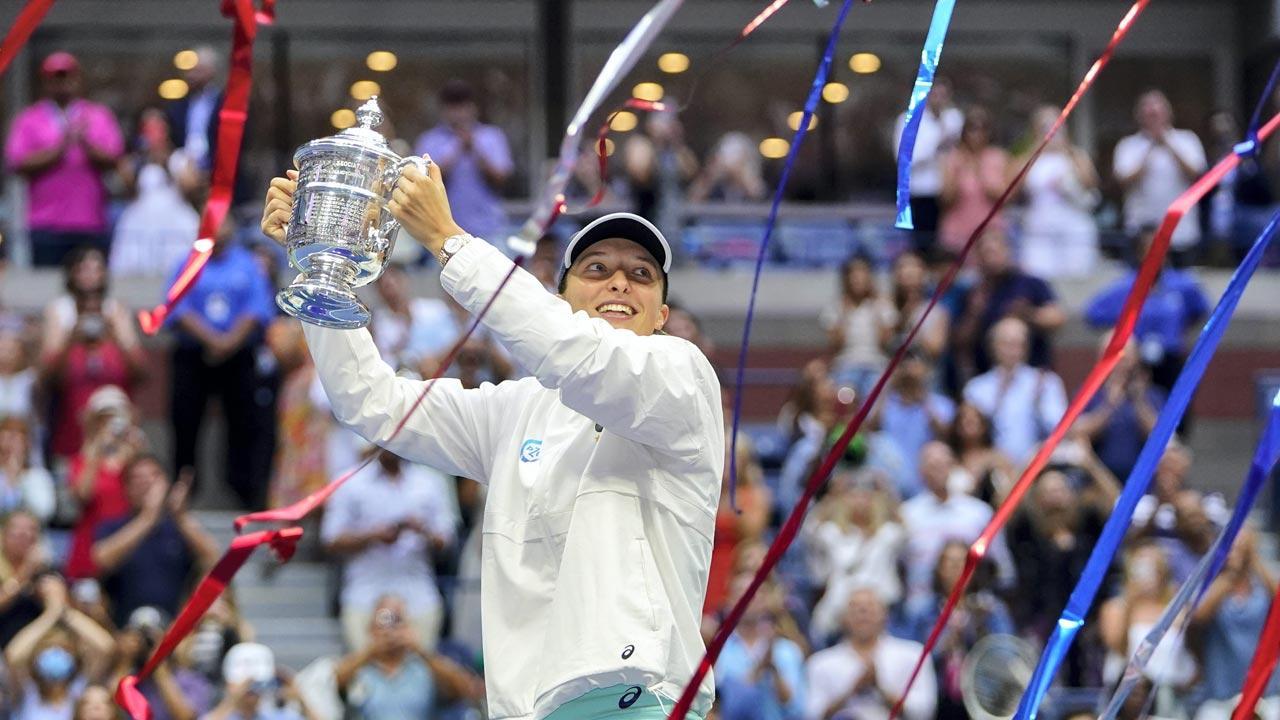 
Polish tennis star and world No. 1 Iga Swiatek added a third Grand Slam singles trophy to her cupboard, defeating Tunisia's Ons Jabeur 6-2, 7-6 (5) to win the US Open crown for the first time on Sunday (IST). Following Ashleigh Barty's surprise retirement in March this year, Swiatek was thrust into the role of No.1 at the age of 20 then, but she has since handled the pressure very well, proceeding to win 37 straight matches, including the French Open.

On Sunday at the Flushing Meadows, rather than being intimidated by the No.1 ranking, the Polish tennis ace -- now 21 years old -- seemed quite inspired. "I needed to stay composed and focus on the goals," Swiatek was quoted as saying by WTA. "It's New York -- it's so loud, it's so crazy. It's really mind-blowing for me. I'm really proud I could handle it mentally." Against Tunisia's Jabeur in the final, the match came down to a tight second-set tiebreak. Down 4-5, the Pole fired a forehand winner that hit the line. When Jabeur's forehand sailed long two points later, she had closed another deal.

Swiatek's success on hardcourts has come as a revelation this season as the player, considered a clay court specialist, has won three successive WTA 1000 events on the hardcourts in Doha, Indian Wells and Miami.

This US Open 2022 crown underlines her versatility. Swaitek is only the third woman player in the last 15 years to win multiple majors in a season on different surfaces, joining retired American legend Serena Williams and Justine Henin.

"At the beginning of the season I realised that maybe I can have some good results on WTA events," Swiatek said. "I also made it to the semifinal of Australian Open. But I wasn't sure if I was on the level yet to win actually a Grand Slam, especially on US Open where the surface is so fast. "It's something that I wasn't expecting for sure. It's also like a confirmation for me that sky is the limit. I'm proud, also surprised a little bit, just happy that I was able to do that," she added.

Swiatek's awesome form has seen her win her last 10 finals in straight sets. This is the champion's seventh title of the year. She's the first woman to do so since Serena in 2014 and the first No.1 seed to take the title since Williams eight years ago. Swiatek also became the youngest woman to win her third major title since Russia's Maria Sharapova (20 years) in 2008. She is also only the ninth player of the Open Era to win her third major before turning 22.

"I think in general (Swiatek just plays) better at the right moment, at the important points," Jabeur said. "She knows exactly what to do. I feel like she improved a lot from last year until the beginning of this year again." "For sure, the weather changed because it wasn't that hot in the second part of the tournament. It was helpful. Sometimes we have many things actually to think about on court. Sometimes I wasn't able to do it every time, so I was making a lot of mistakes. Then I finally accepted that I'm going to make those mistakes. It's not going to be like on slow surface where I can build a rally, then be really calm and just finish," said Swaitek.

"It's going to be more risk and less control, for sure. So I accepted that. That was the thing that actually let me be more free," she added. On Monday when the latest WTA Rankings are released, Swiatek and Jabeur will be ranked, No.1 and No.2 respectively. They have scored the most victories on the WTA Tour over the past two years and are also one-two in the Race to the WTA Finals leaderboard. Both players were appearing in their second major final of the season.

Upon receiving the USD2.6 million winner's check, Swiatek got a laugh from the crowd in Arthur Ashe Stadium when she said, "I'm really glad that is not in cash."