India took the lead in the ninth minute through Karthi Selvam before Abdul Rana broke their neighbours' heart by equalising in the 59th from a penalty corner. India will next play Japan on Tuesday 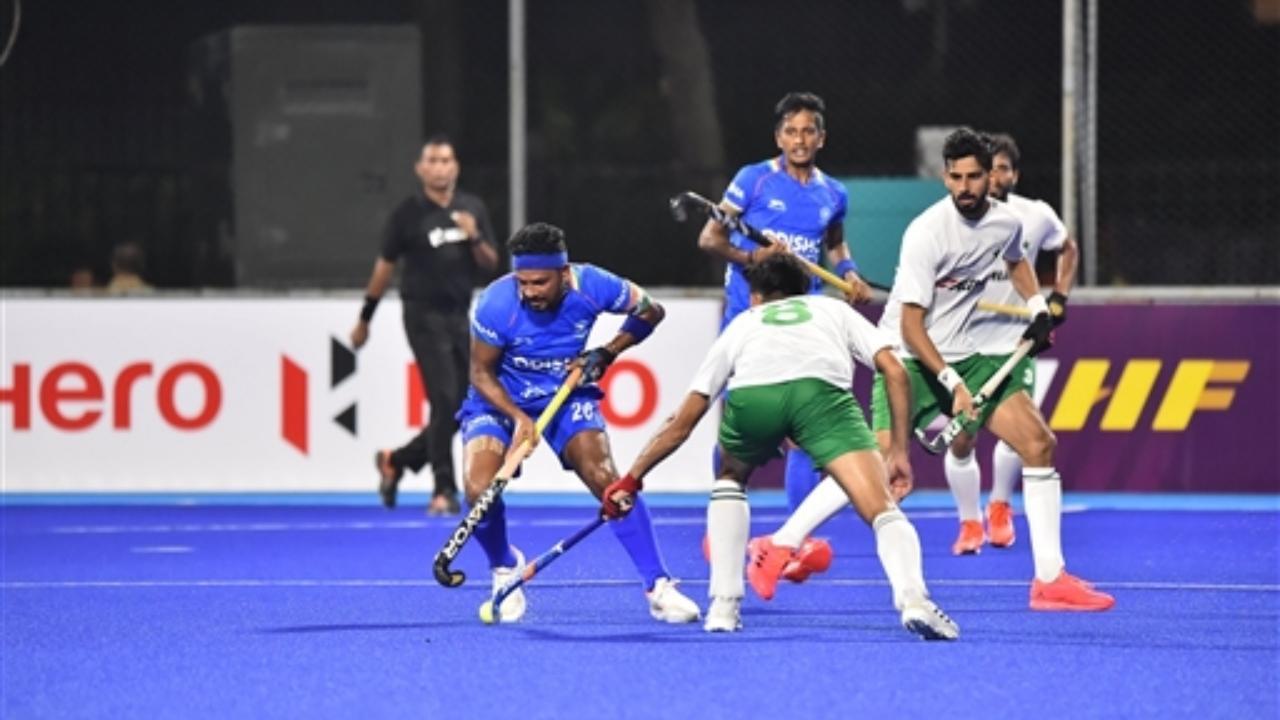 Indian (in blue) and Pakistani players vie for the ball during their Hero Asia Cup 2022 hockey match, at the GBK Hockey field in Jakarta. Pic/PTI


Defending champions India conceded a late goal to allow arch-rivals Pakistan walk away with a 1-1 draw in their opening Pool A match of the Asia Cup men's hockey tournament, here on Monday.

India took the lead in the ninth minute through Karthi Selvam before Abdul Rana broke their neighbours' heart by equalising in the 59th from a penalty corner.
India will next play Japan on Tuesday.

Pakistan had the first scoring chance in the third minute in the form of a penalty corner, but they failed to stop the ball properly as India survived.

Seconds later, it was India's turn to secure a penalty corner but Neelam Sanjip Xess' effort was saved by the Pakistan goalie Akmal Hussain.

The Indians continued to put pressure on the Pakistan defence and secured two more penalty corners in the first quarter, the second of which was converted by Karthi, who scored his first international goal after his flick went inside the Pakistan citadel after getting a deflection off the stick of defender Muhammad Abdullah.

In between Pakistan also got another penalty corner but the effort went wide.

Soon after the start of the second quarter, Pakistan goalkeeper Hussain made a fine reflex save to deny Pawan Rajbhar from point blank range.

The Indians dominated the ball possession and secured another penalty corner in the 21st minute which went a begging.

Two minutes from the half time, Pakistan got a chance to equalise when they were awarded a penalty corner for an unnecessary tackle outside circle by young

Vishnukant Singh, but once again miss-stop ruined the opportunity as India went into the break with a slender 1-0 lead.

Pakistan made a bright start after the change of ends and threatened the Indian defence early on.

Minutes later India custodian Suraj Karkera made a brilliant save from close range to deny Abdul Rana and then the resultant rebound was shot over by Afraz.

Thereafter India had a flurry of chances -- one to Rajbhar and then to Uttam Singh -- but Pakistan goalkeeper Hussain was there to save his side. The Indians kept up the pressure and secured a few more penalty corners in the third quarter but could convert none.

Credit should also go to Pakistan keeper Hussain, who stood like a rock in front of the goal.

A lapse in concentration cost India dearly as a long ball caught, an otherwise alert Indian defence, off guard in the final two minutes, resulting in a penalty corner for Pakistan.

Rana pushed in from a rebound after Mubashar Ali's flick was saved at the goal line by Yashdeep Siwach.

Meanwhile in the other matches of the day, Malaysia beat Oman 7-0 and Korea defeated Bangladesh 6-1 in Pool B, while Japan thrashed hosts Indonesia 9-0 in Pool A.

Next Story : Olympian Devindar wants CTC to cash in after hockey title