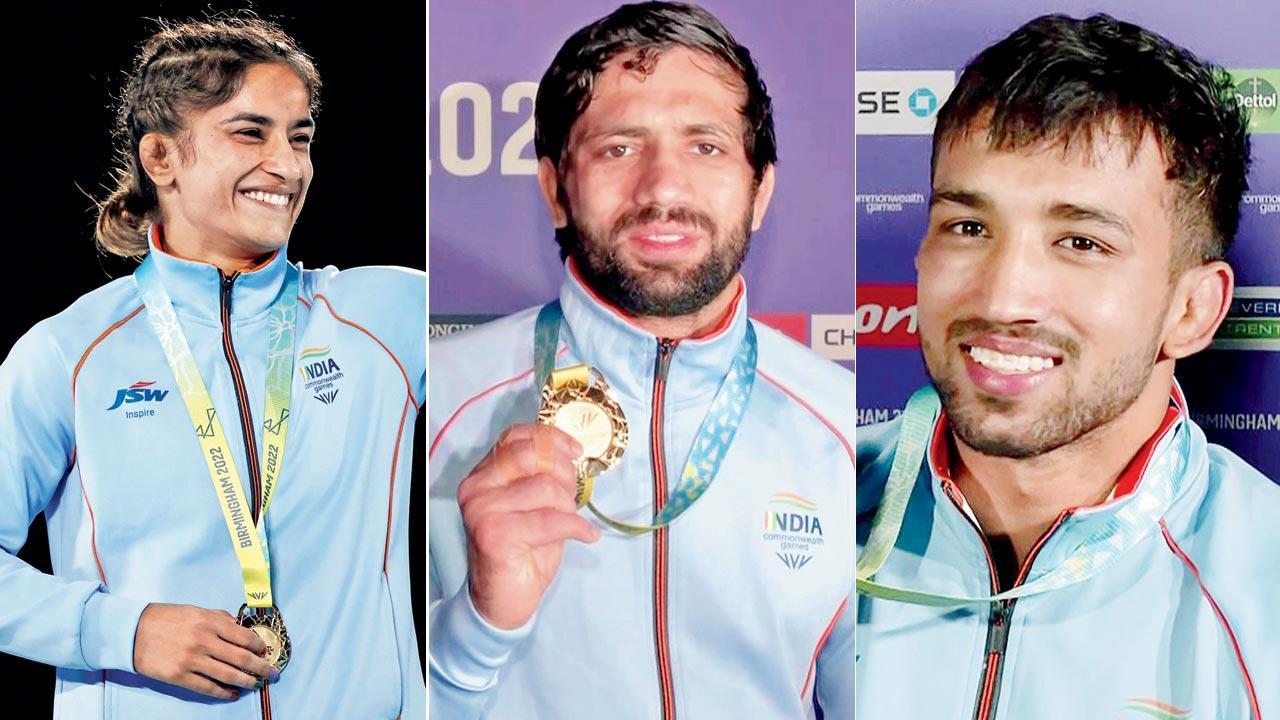 
Hidden behind that shy smile and moist eyes was the pain that Vinesh Phogat was trying to hide and overcome. Once touted as the finest Indian woman wrestler, she suffered a career-threatening injury at the Rio Olympics. She was also involved in a controversial exchange with federation officials. She doesn’t talk about that anymore.

After three gold medals on the first day of the competition, Vinesh, Ravi Kumar (men’s 57 kg) and Naveen (men’s 74 kg) added to the golden tally. The three bronze medallists on Saturday were Pooja Gehlot (women’s 50 kg), Pooja Sihag (women’s 76 kg) and Deepak Nehra (men’s 97 kg). Over two days, India had seven finalists and only Anshu Malik lost a final to take India’s only wrestling silver of the Games. While India’s six gold medals here was one better than 2018, their overall medal count in wrestling (six gold, one silver, five bronze) made it their highest from any single sport at the CWG.

Beset with injuries over the last few years, Vinesh last won a big Games gold medal at the 2018 CWG. She is now the first Indian woman to win three gold medals at the CWG.

Vinesh had the entire nation watching her suffer in agony, when she fell and injured herself after being a medal contender at the 2016 Rio Olympics. She crashed out and went straight to the hospital. Then, at the Tokyo Olympics, she lost in the first round. That’s when she began fighting back in life and on the mat. “Only I know what all I have done to win this medal, what all I have gone through over the past 12 months,” an emotional Vinesh said.

“My family push me a lot on my diet, making sure I’m consuming enough milk and almonds. I have also started training with the boys, I didn’t do that a lot earlier. The environment around me has changed a lot [since Tokyo].  My husband has started to stay with me while I’m training [in Lucknow]. It is always tough to win a gold and more so after so many injuries and mental pressure. I had hit rock bottom mentally, I was not able to digest what was going wrong with me. I had lost my confidence. I feel I have found it now,” she added. Vinesh’s category had only four fights. Her first match was a tough one. However, making a comeback to a top event for the first time since 2018, she outclassed Samantha Leigh Stewart in just 36 seconds. She then made short work of Mercy Mercy Bolafunoluwa Adekuoroye 6-0 and grabbed the gold by beating Sri Lanka’s CK Maduravlage Don by a Fall.

Next Story : PV Sindhu, Lakshya Sen and Satwik-Shetty, a step away from golden glow