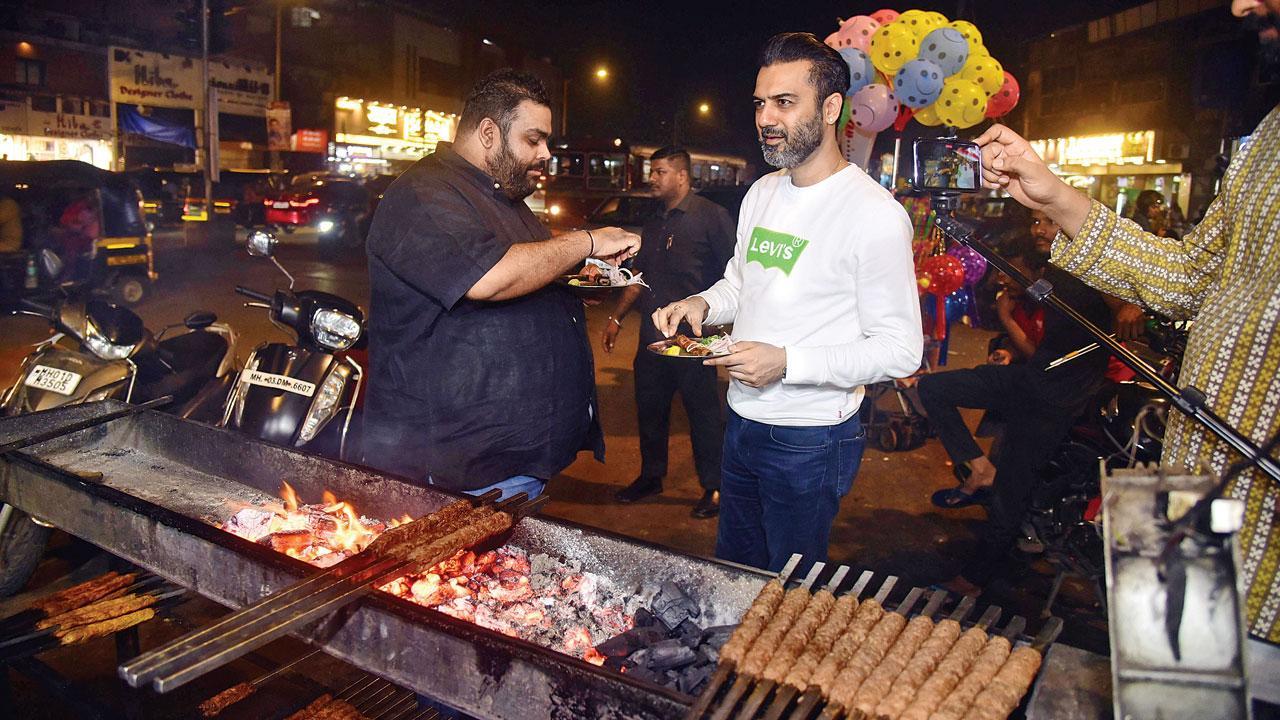 Chef-restaurateurs Yajush Malik and Ashesh L Sajnani eat through streets of Kurla with mid-day in search of the best seekh paratha in the suburb. Pics/Shadab Khan


There is a 107-year-old Jewish prayer hall with a Mangalore-tiled roof that we pass every day. A 400-year-old East Indian settlement isn't too far. The Kurla quarries supplied stone for the construction of the Prince of  Wales Museum (now Chhatrapati Shivaji Maharaj Vastu Sangrahalaya) and the General Post Office, among other prominent city structures.

This writer’s home stands on the land where the Premier Automobiles factory once reigned. It made the iconic Premier Padmini and collaborated with Chrysler to manufacture Dodge, Plymouth and Desoto models in India. “The Salsette-Trombay Railway, that ran from Trombay to Andheri, went via Kurla,” says architect and heritage enthusiast Rahul Chemburkar. “Though it lasted only a few years, it was an important aspect of the city.”

What magnificent history this neighbourhood by the Mithi river has witnessed. Clearly, it is more than a ghetto for the Muslim community, as it is now seen.  “The land originally belonged to the East Indians, fisherfolk and farmers,” continues Chemburkar.  “The arrival of cotton mills and other industries drew labour from across the state. The story of Kurla is an evolving one and if you dig deeper, you'll find many layers.”

Scrap business burgeoned here in the 1970s and '80s, with key players arriving from small towns in Uttar Pradesh, such as Gonda and Basti. With them came their cuisine, and small establishments along Lal Bahadur Shastri Road served it.

In the last 15 years, a part of the road stretching from Kurla bus depot to Phoenix Market City has seen several hole-in-the-wall eateries with dastarkhwan-style seating crop up. In some sense a mini-Mohammed Ali Road, the arrival of big guns such as Noor Mohammadi, Persian Darbar and Delhi Zaika cemented the reputation. Though there are no shopping avenues here, it’s hard not to draw a comparison. From shawarma to seekh paratha, nihari and barra, its non-vegetarian culinary offerings make it a meat lover's haunt. Sunday mid-day walked the stretch and sampled goodies with chef-restaurateurs Yajush Malik of Gallops and Ashesh L Sajnani of The Bombay Food Truck  and Le Cafe. 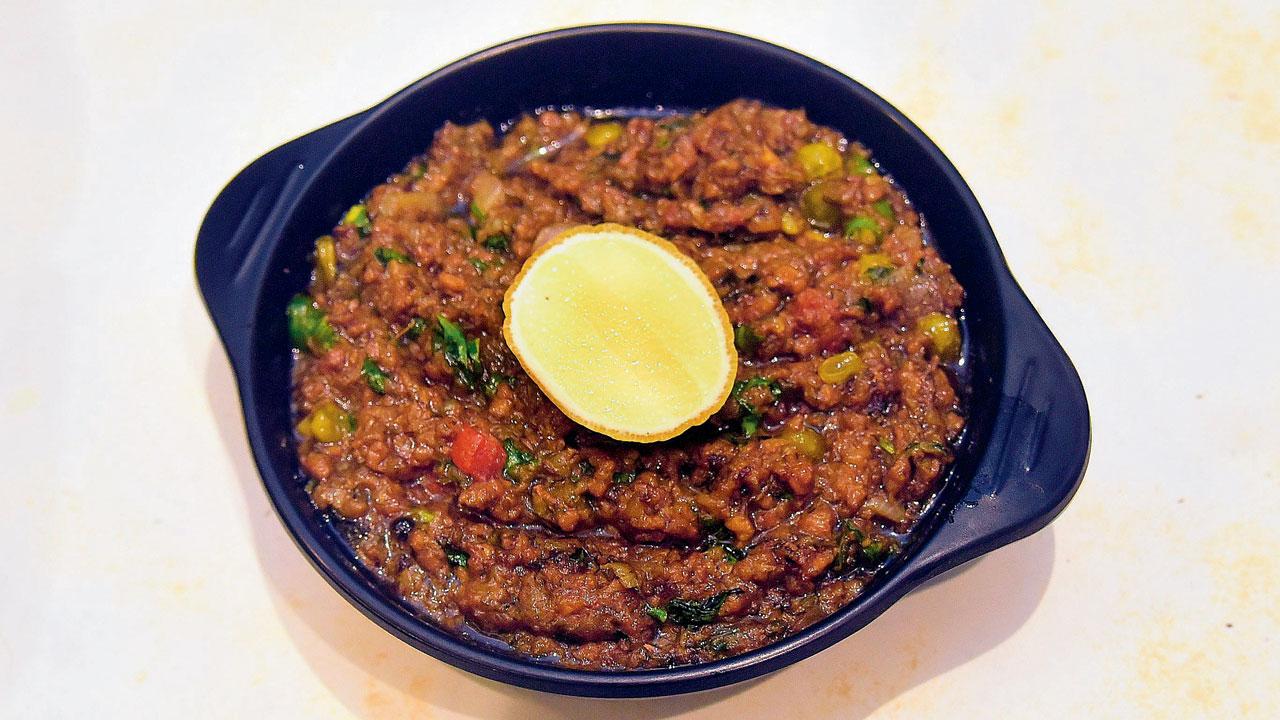 Sahara Hotel is famous for many things but we choose their kheema pav (R105) to discuss here with you. Available only in the mornings, we had to make a fresh trek the next day to savour it. We try the kheema fry (Rs 126) too. “The kheema fry has added chillies, tomato and cardamom and I recommend it to anyone keen on having a heavy breakfast that can see them through to dinner,” says Sajnani. 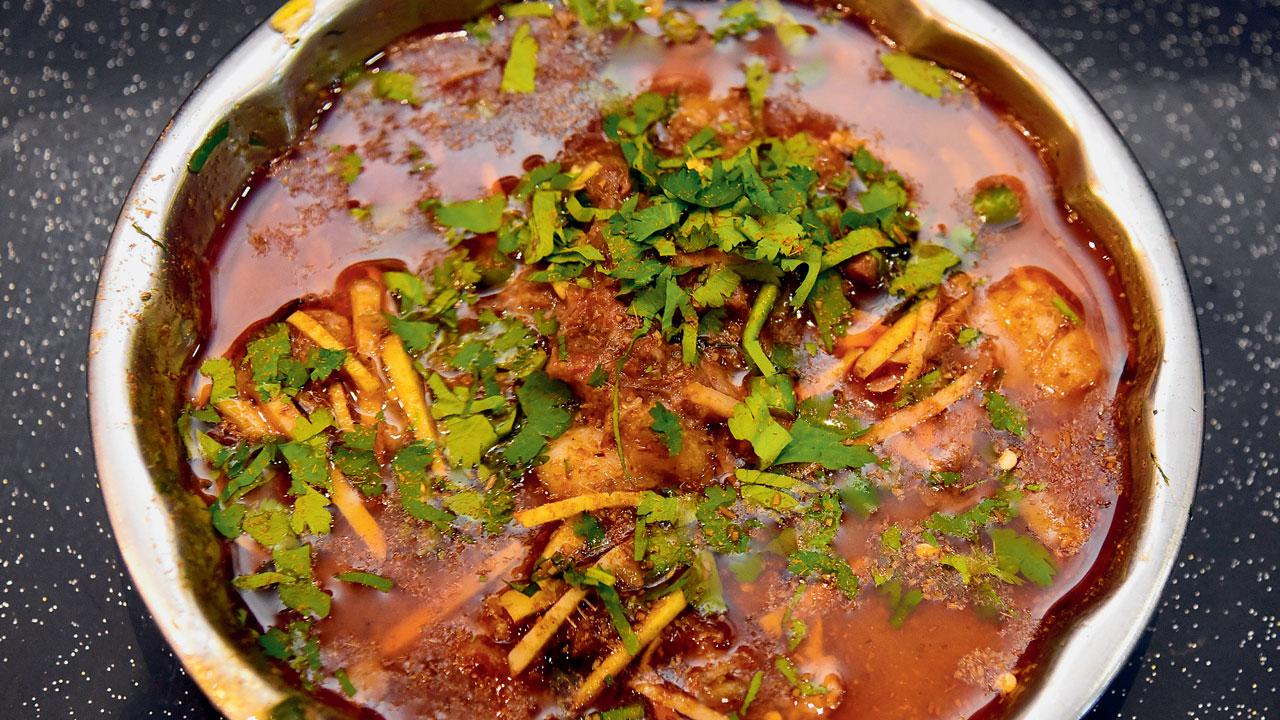 In Shalimar ki Gali, we stop at the new arrival, Qureshi Kebab. It hawks just two dishes—kebab and nihari—with tandoori roti. Malik dips his fingers into the half-plate (Rs 250) to check the greasiness—the benchmark of a good nihari. He is satisfied. “The taste is strong," he says, "you get the kick of black pepper and it fulfils the requirement of being a nourishing meal, originally made by royal chefs in Lucknow to feed workers who built the imambara. The broth is rich and flavourful; but the roti is disappointing.” This khameeri roti (Rs 10), he says, is made with soda.

The chicken Peshawari (Rs 460) at Delhi Zaika is present on every table of this narrow three-storied eatery that also has private family dining rooms. Unfortunately, it doesn’t live up to its fame. The dish has tandoori chicken cooked in a yellow, creamy sauce. “I am not sure if this is a one-off error but the tandoori chicken is hard, the sauce hasn’t seeped in and it’s swimming unnecessarily in butter. There’s nothing to like,” is Sajnani's verdict. 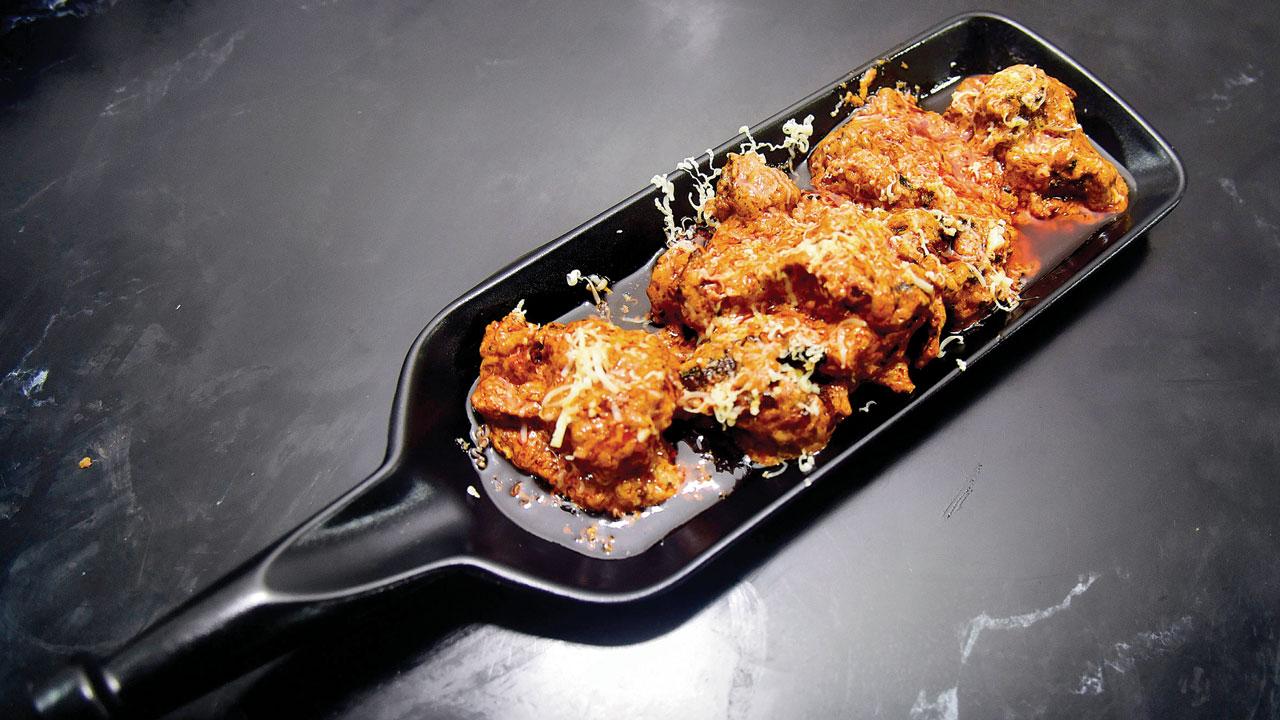 Janta Tawa and Grill is known for starters—many make a meal of them. We are welcomed by rows of whole chickens on skewers marinating in red, yellow, orange and green masalas, ready to be roasted. We go up the narrow stairs to the tiny seating space that densely packs four tables (don’t ask how). We call for the chicken barra, but are told the mutton barra (Rs 320) is better. It is. “The meat is soft, well-cooked and smokey—just like barra should be. But I think he added more butter than he should have when he saw we were carrying cameras,” says Malik. 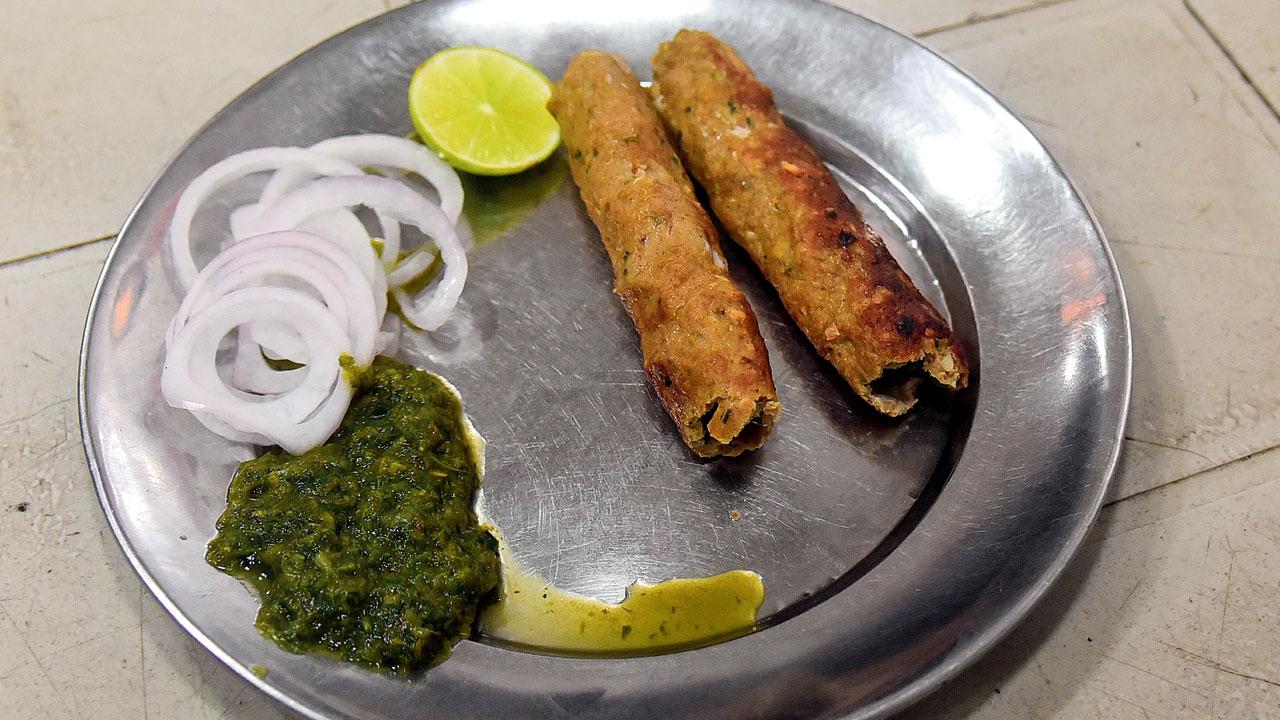 Most people have two favourites on the opposite side of the street at Laziz Seekh Paratha—the buff seekh (R15) and chicken seekh (R40) that comes with chutney, onion rings, pudina and lemon. A deep-fried paratha that looks like a bhatura accompanies it. The buff one is spicy, flavourful, juicy and perfectly cooked is Malik's verdict. "It doesn't smell gamey and isn’t dry. The paratha is gold, almost like a savoury malpua!” He made a roll adding  the chutney and onion. Lajawab is where the boys say they had a better time because the “meat is softer and juicier than Laziz, especially in the chicken variant”. Sajnani would like to come back for more. 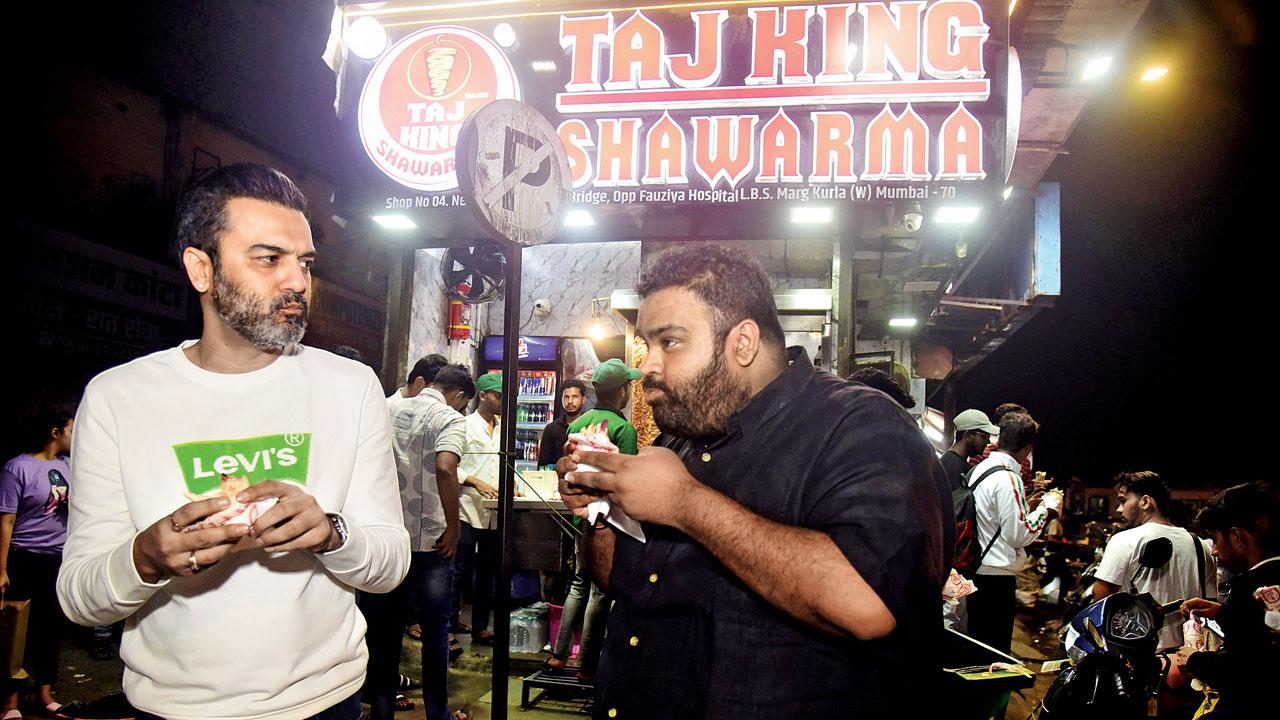 Taj King Shawarma has two outlets within 100 metres. Slabs of skewered chicken roasted on a side pit are cut and wrapped in pita bread—what’s not to like? There’s always a queue here, so he must be doing something differently. We try the chicken shawarma (Rs 60) and the Taj King special (Rs 100). 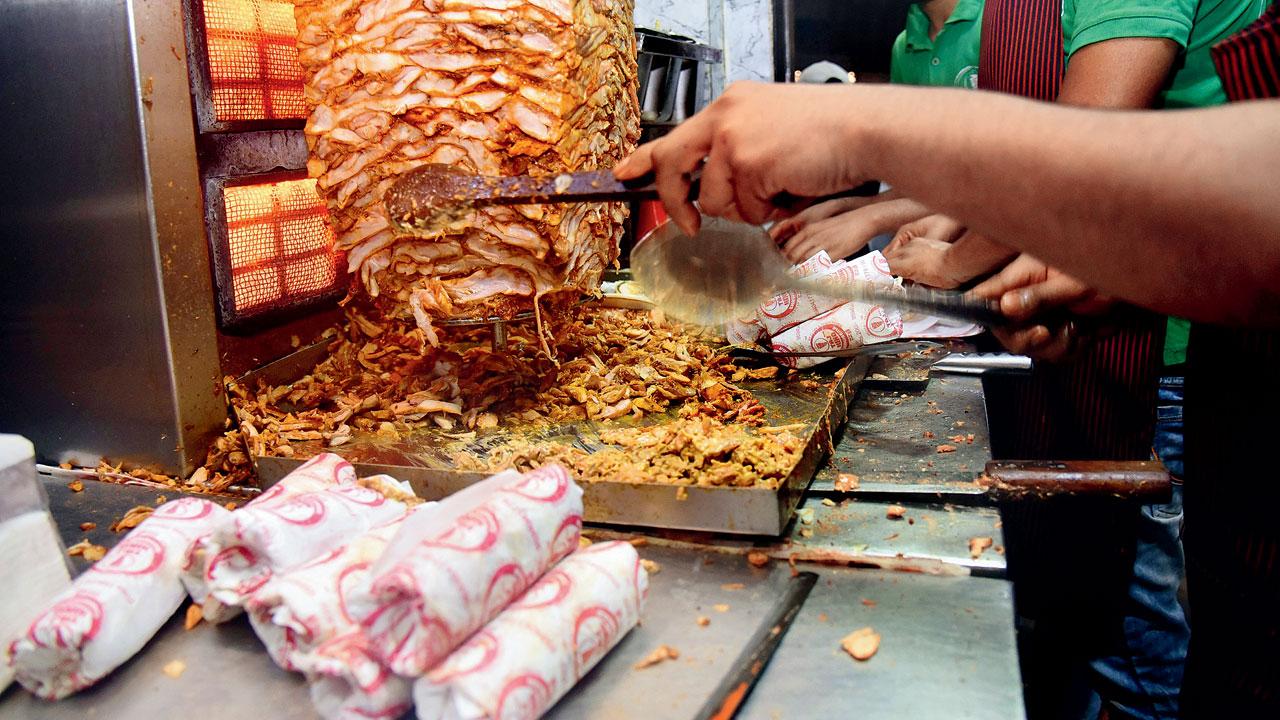 Both taste good but our companions are partial to the special. “This is the Maharaja Mac of shawarma—there’s more chicken, cheese, lettuce instead of cabbage, jalapeño, purple cabbage and cheese sauce. That makes it softer and more flavourful,” thinks Malik. 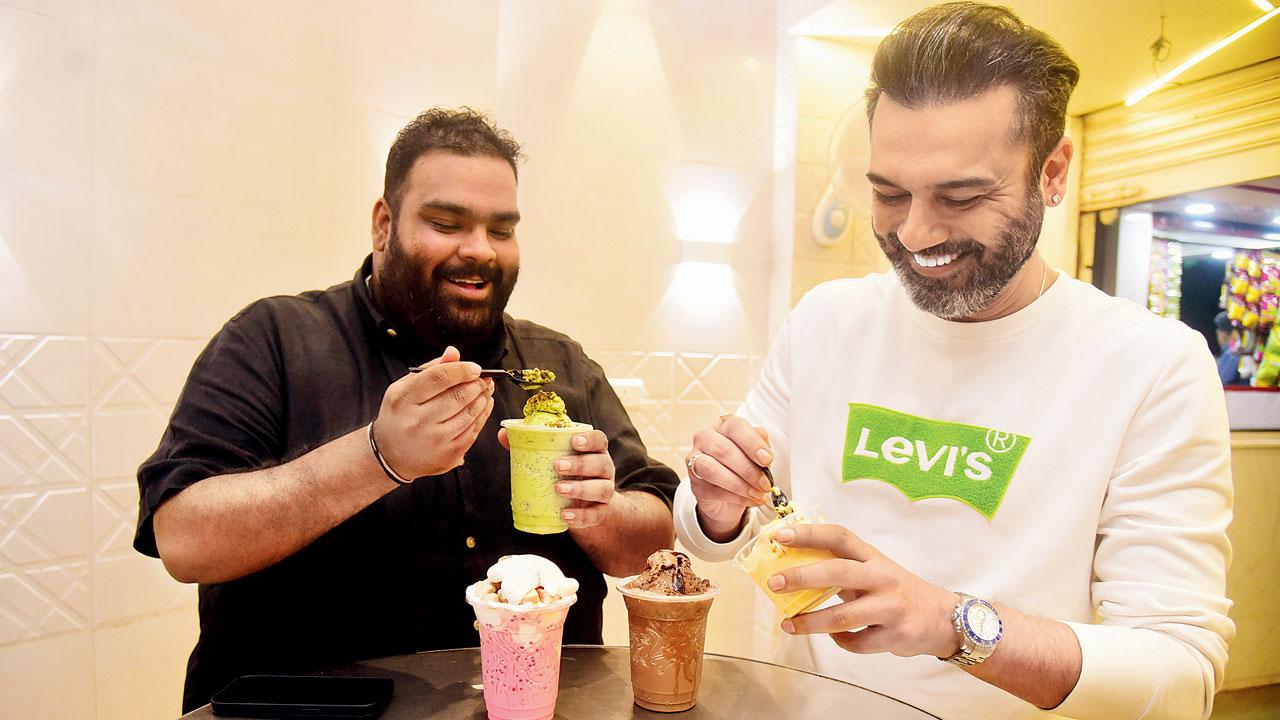 It is time to end our eatathon  with something sweet. Baba Falooda (of Mahim fame) started this outlet two years ago and not once have we seen this place empty. From a limited menu, we pick the royal chocolate and green pista (both Rs 145) and a scoop of their famous kesar pista ice cream (Rs 95). 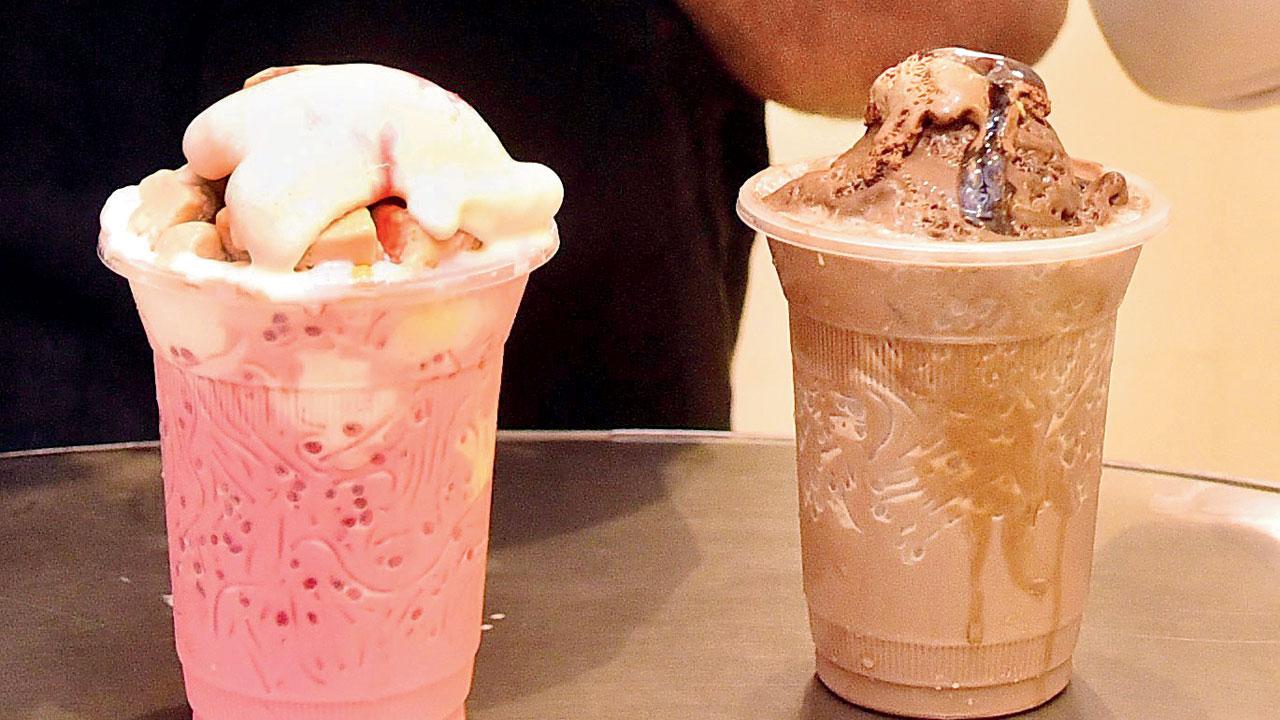 “I'm upset I've never had this before!," says Sajnani. "The kesar pista is right up there and better than even notable brands.” Malik likes the falooda because “it is filled to the brim—simple, loaded and not overly sweet.” At 12.30 am on a weekday, the street is still buzzing, but we must call it a night.

Birista is a relatively new establishment that serves biryani in a pot. As the steward opens the parda on the mutton barista biryani double (R630) pot, the aroma wafts out. But our excitement is short lived. It tastes like a biryani made with sour pre-mix masala. The marriage of the mutton and masala and the flavour of dum is missing. “We’ll pass,” says Sajnani.

During Ramzan, everyone who goes to Mohammed Ali Road on a food trail has Bhendi Bazaar’s legendary Noor Mohammadi Hotel on their list. The Sanju Baba chicken, is a sensation but their chicken korma, mutton hakimi, haleem and nalli nihari are famous too. Back in 2000, they were the first to veer away from the masala-laden biryani when Raashid Hakim, the third-generation owner, made white biryani and offered it to his actor friend Sanjay Dutt. “This was before white biryani became common on restaurant and wedding menus. Baba loved it and shared the recipe of his favourite chicken—we added it to our menu. It has remained a hit since,” says Hakim. 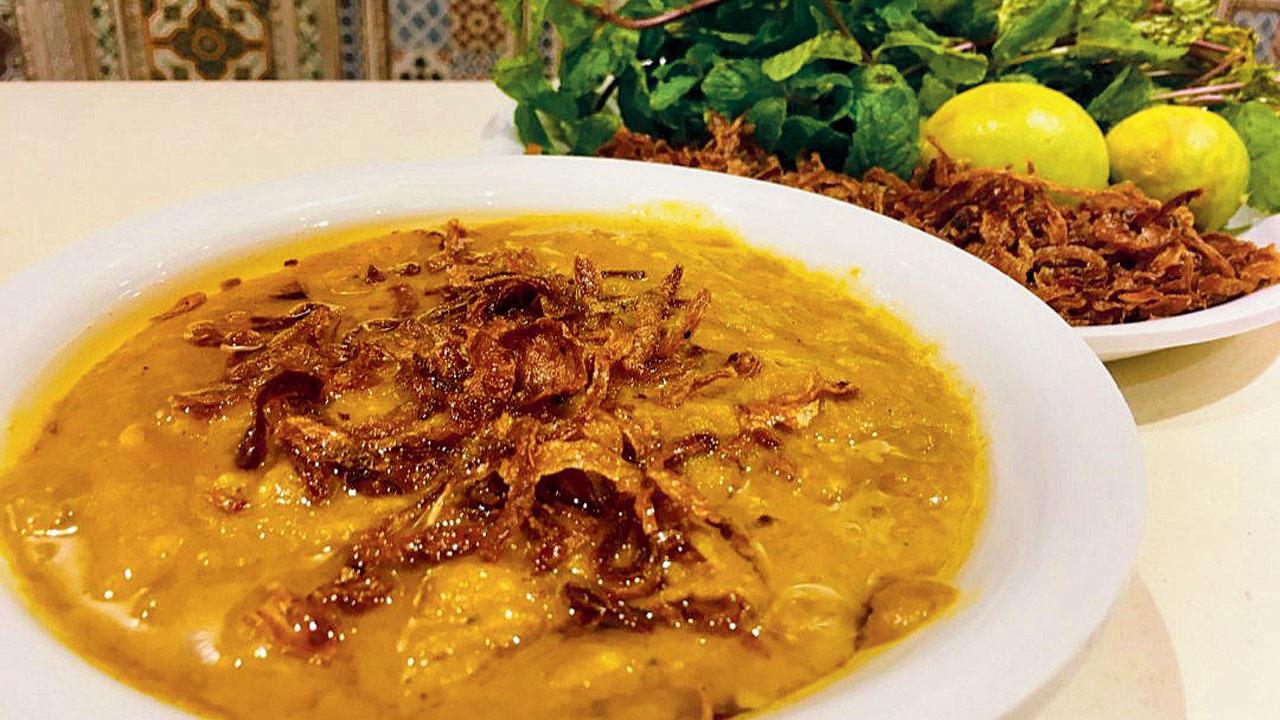 Next year, Noor Mohammadi, started by Hakim’s grandfather, Abdul Kareem, will hit a century. Now, the reins are in the hands of the fourth generation: Raashid’s son Daanish and nephew Wajahat who run the show in Mumbai and Dubai. Next weekend, they inaugurate their second branch in Kurla. “Kurla is the new hub of good non-veg food—the timing is ideal,” says Hakim. The Kurla outlet will have regular, dastarkhwan and terrace seating and new tava items like bheja, gurda and kaleji to boast of.