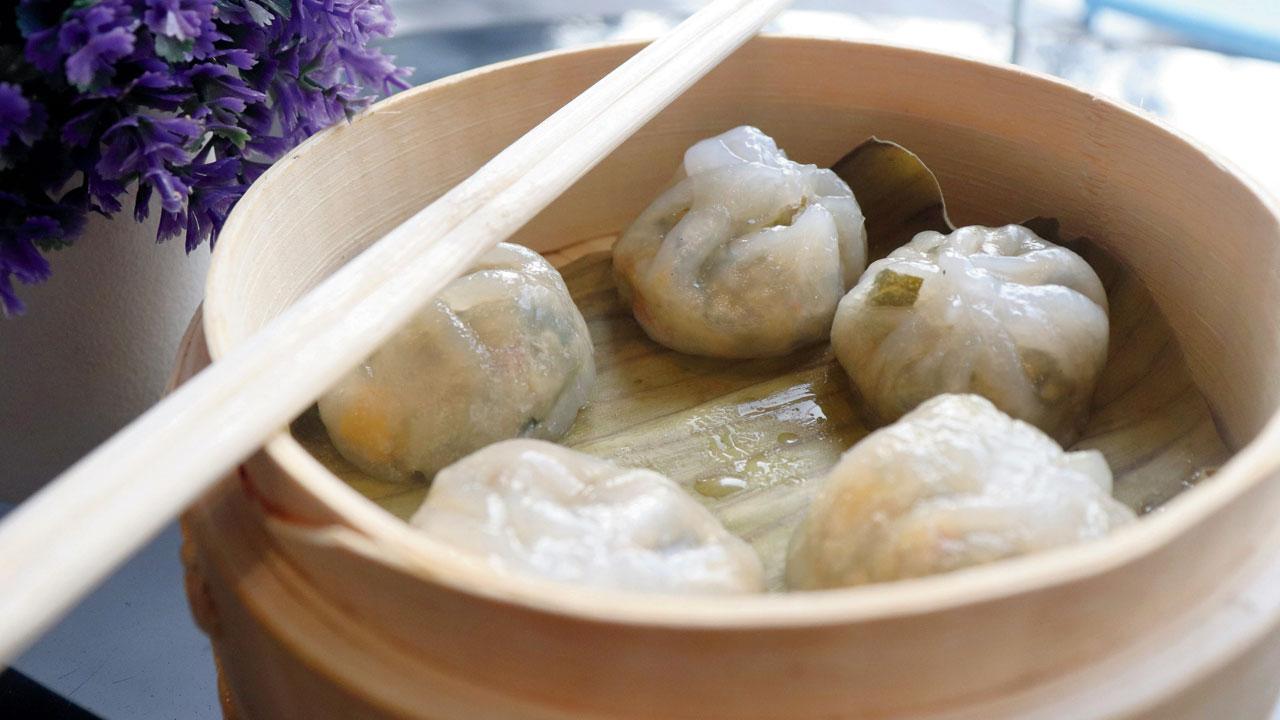 
Among the eateries along the streets of Mira Road, a poster with the words, ‘I BTS’ is evocative for fans of the seven-member South Korean boy band Bangtan Sonyeondan. Inside, upbeat K-pop songs fill the air, and a poster spans the length of a wall with the boyish faces of the band recognised the world over for their varied discography, intense dance moves, and cross-cultural impact.

Bangtan Shefs is one of Mumbai’s first BTS-themed restaurant launched in 2020 by Riya Goon, 28. It offers BTS fans, or the Army as they are called, a space to connect with other fans over their love for Korean music, food, and culture. “These band members came from being nothing, to being BTS. For me, that was motivating,” says Goon, who has no background in hospitality. The foodie, who studied business management in London, began her culinary journey by selling momos during the lockdown. It’s what encouraged her to go big. But also, that Goon’s sister, an ardent BTS fan, was going through a rough patch. Goon thought this would change things for her. It took six months of savings to transform from a stall selling a single food item to being a restaurant that supports a community of K-pop music lovers. 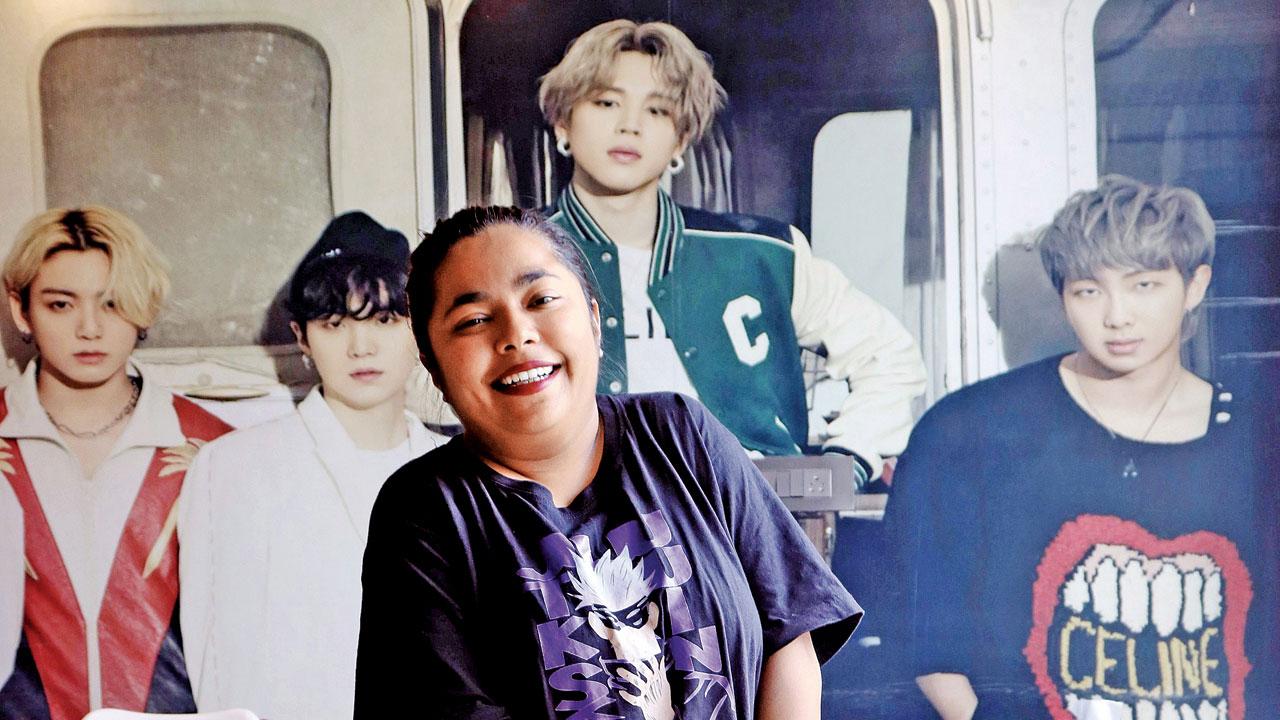 Goon realised she had a legal hurdle before her when she learnt that Hybe Entertainment, the management company behind BTS does not allow the use of BTS’ images. “It took nine months or so [to secure permissions], but they did provide me with the permission finally,” Goon smiles.

When Film Out, a Japanese song by BTS, was released in 2021, the restaurant held a live screening. Over a hundred people showed up. “I realised that these kids have been cooped up for two years, and they’re looking for a place where they won’t feel judged,” says Goon, who also organises sessions and screenings to celebrate the birthdays of BTS members. “We talk about mental health, giving back to the community, and everyone enjoys a Korean buffet.”

Sakhi Mhatre, 22, who attended a recent concert screening says about the power of BTS’ music, “They helped me through the hardest times in my life. I wanted to watch it [the concert] with the Army.” And while the former band sees more women fans, 20-year-old Aditya Maske, proudly declares that he has been a follower since 2018 and a lover of K-pop since 2005. “Sometimes it’s awkward,” he admits, laughing. “In many events, I’m the only guy.”

The response, she says, has been overwhelming, with almost 2,000 people showing up in the first month of opening, including parents who came along with their children, reluctantly curious about the band’s fandom. “For me, it was important that people, their parents, would look at me, and see that I am not crazy. I was after all, inspired to open a legitimate business because I follow BTS.” 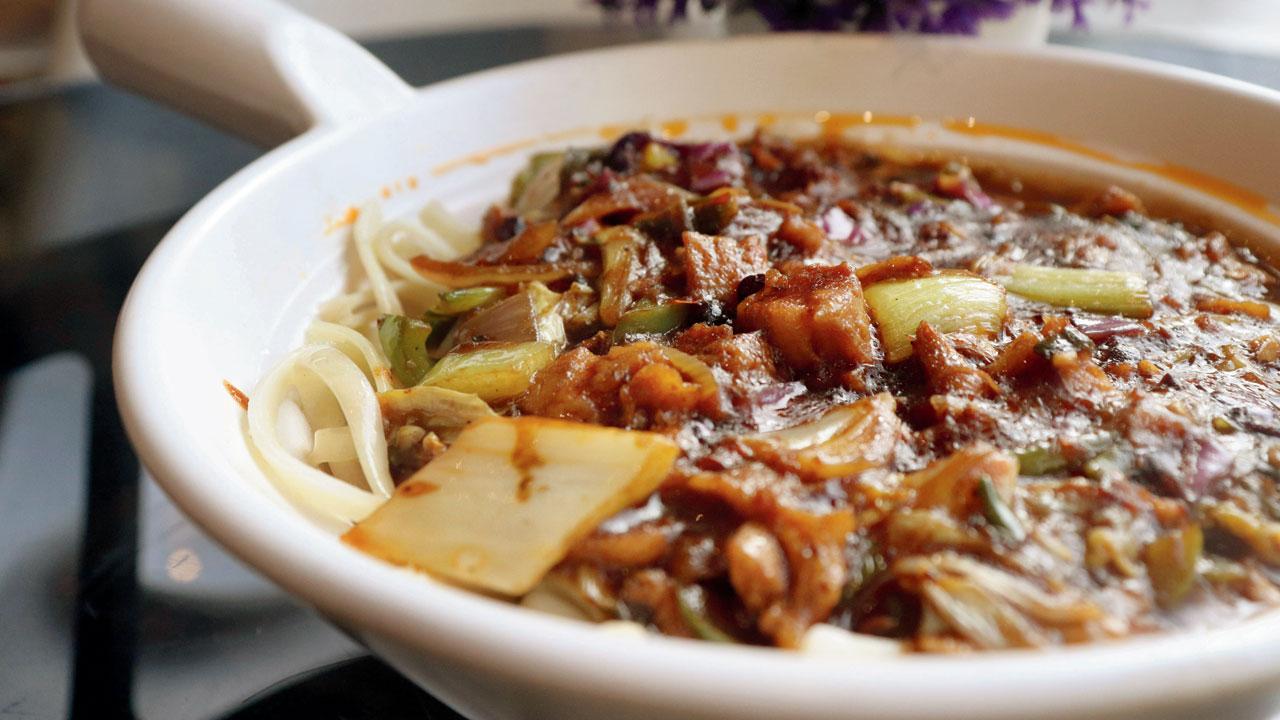 Inside, fans of BTS have left their mark. Handwritten letters are pinned to a board, along with pictures of the boys drawn in painstaking detail. Next to the ‘BTS and Army’s’ sign, a book where visitors can leave their comments lies open. Everyone who visits feels an instant connection. There is a sense of community and it has impacted not only the customers but also the restaurant’s staff. Abdul Wahid said he turned into a fan after joining the team at Bangtan Shefs.

The restaurant’s menu is an amalgamation of dishes that draw from Chinese, Korean, and Indian culinary traditions. While authentic Korean food is hard to come by in India, Goon wanted to serve food that had roots in Korea but was suited to the Indian palate. The gimbap (cooked rice served with vegetables or meats in a seaweed wrap) and tteok-bokki (spicy stir-fried rice cakes), Goon says, are whipped up using local ingredients and spices. This writer tried the vegetable crystal dimsums (R380), which were piping hot with a subtle flavour and served with a sweet chilli sauce. Corn dogs available in veg (R599) and non-veg (Rs 599) options are popular with the guests.

A fan-themed eatery, says Goon, must also be ready for criticism. Not everyone is a BTS fan, she reasons, and she sometimes gets snide comments from those who think BTS is a joke. “Sometimes, guests step inside, see the décor, and leave with a grimace.” The BTS members are themselves not alien to hate. The leader of the group, Kim Namjoon, said in a recent live video that the hate comments used to get to him, but he’s better at dealing with them now. “BTS is not just about seven boys. It’s a huge wave consisting of various people. And what they ignore is the existence of Army. Different races, difference genders, so many kinds of people, are meaningfully involved, in this name called BTS.”

Next Story : Why more food delivery kitchens are serving their food in clay vessels