Rakul Preet Singh gets trolled for posting these pictures!

Rakul Preet Singh is currently busy with the promotions of her upcoming film, De De Pyaar De with Ajay Devgn and Tabu. For one of her promotions, the actress wore a nice frilly dress and the netizens jumped to teach her some moral code of conduct 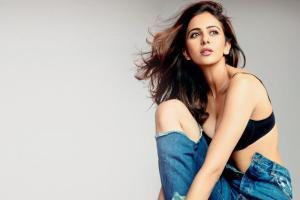 The star cast of De De Pyaar De is on an extensive promotion-spree for the film, and for one of the promotions, Rakul Preet wore a summery frilled dress. The actress shared the picture on her Instagram account, where she looks all happy and chirpy.

Actress Rhea Chakraborty, Rakul's friend, found the pictures very cute. This is what she wrote, "Cutie patootie." However, as they say 'Haters gonna hate', there were some, who just couldn't handle the post and trolled Rakul for "skin show". The netizens stoop low to teach her "how to dress up, what with some calling her "shameless" for revealing her thighs in that dress.

But, Rakul chose to stay unaffected by these trolls.

Ajay Devgn will next be seen in Taanaji: The Unsung Hero, Bhuj: The Pride of India. The film also features Sanjay Dutt, Sonakshi Sinha, and Parineeti Chopra.