De De Pyaar De has cracked the code to woo the audience with this romantic comedy, which, thankfully, did not turn out to be like any other slapstick comedy. 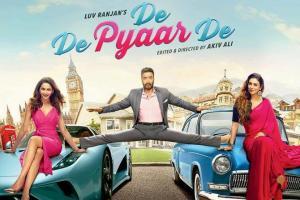 'Old wine in a new bottle' is what De De Pyaar De is all about. But the new bottle is as good and exciting as the old one. While some romantic comedies barely understand the mantra to attract the attention of the viewer, De De Pyaar De has cracked the code to woo the audience with this romantic comedy, which, thankfully, did not turn out to be yet another slapstick comedy.

The film revolves around Ajay Devgn and Rakul Preet Singh's unusual love story. Ashish (50) meets Rakul (26) at a friend's wedding, where Rakul walks into the scene as a stripper, and slowly things start brewing between the two romantically. Later, they get into a relationship and everything works fine until reality struck the two - the big question about marriage.

Jimmy Sheirgill is a treat to watch, the actor plays a cameo as Tabu's friend. Things take a dramatic turn after Ayesha's encounter with Ashish's family, and the plot loses steam in between. At places, the dialogues are far too stretched and stereotypical.

Hits: Ajay Devgn and Rakul Preet Singh's chemistry sparks fire. We loved the freshness Rakul brings on-screen with her bubbly girl-next-door image. Like every film, Tabu charms everyone with her acting chops. We also liked how Ajay Devgn did not hesitate to show highlights of greys on-screen. The film smartly touches base upon issues like live-in, divorce not being a hindrance, and also about the age difference in a relationship. The film's music is the soul of De De Pyaar De.

Misses: At times, the makers failed to register whether they are portraying a serious scene or a comic one. The film has a lot of emotions at times mixed in every frame. Some shots were not needed as they failed to establish its essence of being there, courtesy - film's editing.

Next Story : Kangana Ranaut flirts with the lens while preparing for her Cannes look