X-Ray : The Inner Image is one of the few psychological thrillers releasing this year. 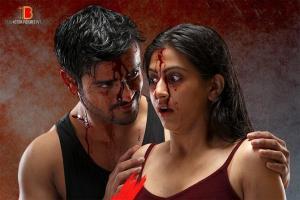 
X Ray: The Inner Image is an upcoming psychological thriller. It stars debutante Rahul Sharma and Yaashi Kapoor in the lead and is directed by Rajiv S Ruia. The makers recently released its trailer that shows an events of one evening when a psychopathic Rahul Sharma is on a constant hide and seek with Yaashi Kapoor. Yaashi is in a constant search for an escape from the personal hell that Rahul has made for her. The trailer has managed to make one's heart race with anticipation and fear of what's going to happen next.

Rajiv Ruia's direction and the sadistic tendencies of Rahul and the pure horror on Yaashi's face leaves you with an unsettling feeling and the masochist need to know more. It builds the perfect anticipation the movie. The director has managed to make this thriller come alive and make you feel like someone's watching.

There's a glimpse of a romantic sensuous song in the trailer which makes us want to hear more. The song is composed by Raaj Aashoo and sung by Dev Negi and written by Alka Khan.

X-Ray : The Inner Image is one of the few psychological thrillers releasing this year. The direction, sound and the cinematography seems promising for the genre. The teaser and the trailer stay true to its genre as well.

Rajiv S Ruia has directed several regional and Hindi movies like My Friend Ganesha trilogy, Mission Mumbai, Direct Ishq, Main Krishna Hoon, Chor Bazaari, Jalwa, Rangeela. He has also directed thriller movies before like Saansein, Zindagi 50-50 and Koi Hai. X-ray will be his first psychological thriller however his direction in the previous thrillers prove that he's great at it.

The film is said to release on November 29, under the banner of Baba Motion Pictures Private Limited and is produced by Pradeep K Sharma.

Next Story : Disha Patani opens up on her early days in Bollywood