The award was bestowed on him by iconic filmmakers Martin Scorsese and Christopher Nolan via a virtual ceremony. 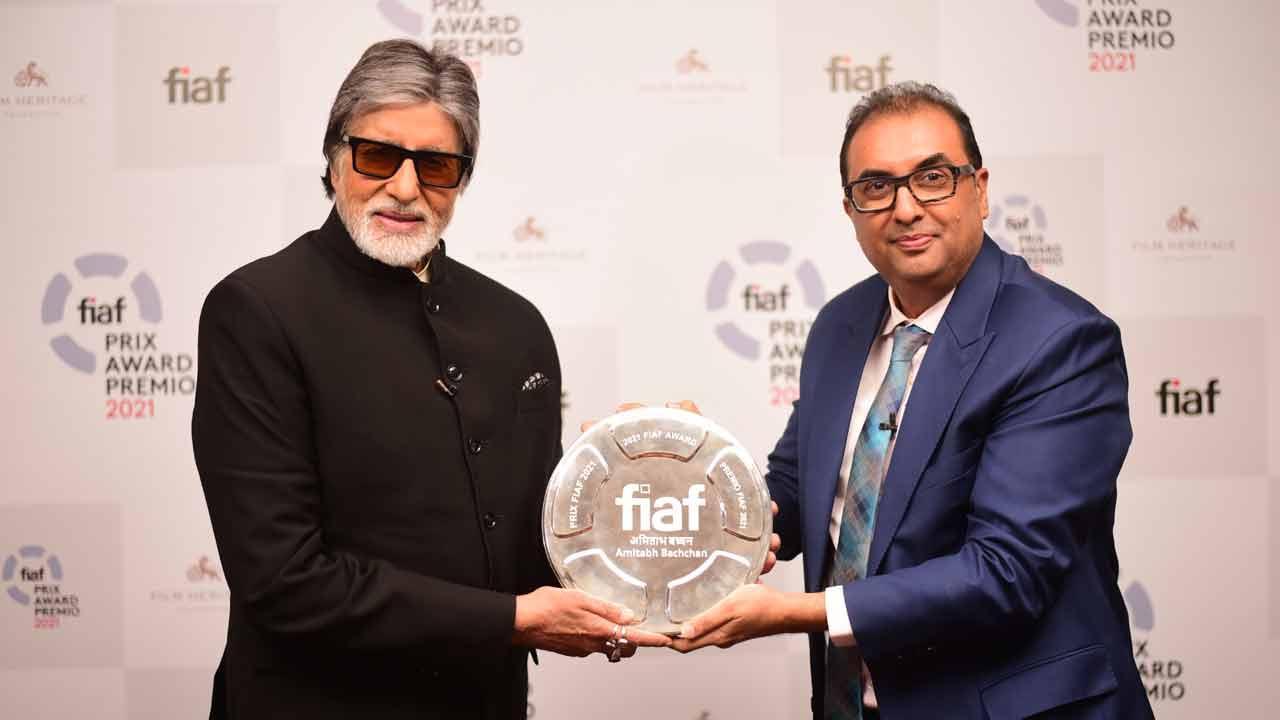 
Amitabh Bachchan was honoured with the prestigious International Federation of Film Archives (FIAF) Award 2021 this evening, which was bestowed on him by iconic filmmakers Martin Scorsese and Christopher Nolan via a virtual ceremony. He is the first Indian to receive this coveted award for his sustained efforts towards the advocacy of the preservation of India’s film heritage.

FIAF is a worldwide organization, comprising film archives and museums from across the world. The 78-year-old actor’s name was nominated by the FIAF affiliate Film Heritage Foundation, a not-for-profit organization founded by filmmaker and archivist Shivendra Singh Dungarpur, dedicated to the preservation, restoration, documentation, exhibition, and study of India’s film heritage.

In the ceremony, Scorsese who was all praise for Bachchan stated, “Cinema is over a century old and sadly, tragically, much of this rich and very diverse film heritage has been lost forever. Safeguarding cinema is a global cause with champions all over the world. Amitabh Bachchan’s advocacy for preserving India’s film heritage really has been exceptional. I mean, as a career spanning over five decades, he is a celebrated actor who has put the considerable weight of his reputation behind the cause of film preservation in India and actually the entire subcontinent.  Film preservation, certainly being a long-time passion for me, leading up to the founding of The Film Foundation over 30 years ago and since 2007, our World Cinema Project has restored 43 films from 25 countries, making them available to you, to audiences everywhere. And I have been following the growth of the preservation movement in India since the creation of the Film Heritage Foundation and we’ve supported their annual archival training initiatives. And as a result, I am well aware of the time and the effort that Amitabh has personally devoted to this cause. And I would like to thank Shivendra Singh Dungarpur and the Film Heritage Foundation for nominating Amitabh for the 2021 FIAF award and the FIAF Executive Committee who unanimously backed this nomination. I mean 20 years ago, I was proud to, actually really proud, to be the first recipient of this prestigious award and I think FIAF could not have chosen a more deserving individual to recognize this year.”

Nolan referring to a rendezvous with Bachchan a few years ago further said, “Hello, I am Christopher Nolan. As a past recipient of the FIAF Award, it’s a great privilege and an honour to present this year’s 2021 FIAF Award to Amitabh Bachchan. I had the privilege of meeting this living legend of Indian cinema a couple of years ago at an event hosted by the Film Heritage Foundation and it’s, as an ambassador for the Film Heritage Foundation, that Mr. Bachchan has done so much advocacy for the vital cause of film preservation in India. It’s for this reason that the FIAF Executive Committee unanimously voted to give Mr. Bachchan this year’s award. Mr. Bachchan, I hope that you realize the importance of everything that you have done for this vital work for the development of proper infrastructure for the preservation of India’s incredible film heritage. This is unbelievably important work and your voice, your reputation behind this cause adds so much and makes so much more possible. For all these reasons, I just want to express my gratitude, the gratitude of FIAF and everybody involved with this award, of everything you have done so far and for everything you will do in the future. So with that having been said, I would invite the Film Heritage Foundation’s Shivendra Singh Dungarpur to present the FIAF award for 2021 on my behalf, and the behalf of all of FIAF. Thank you very much.”

Accepting the award from Shivendra Singh Dungarpur Bachchan who was seen wearing dark glasses due his recent ‘urgent eye surgery’ said “I would like to say that I am deeply honoured to have been chosen as the recipient of the 2021 FIAF Award. I would like to thank all the gentlemen that spoke before me. These are great iconic figures and to hear them talk about me is a moment that I look upon with great grace. I am least deserving of some of the words and the expressions that you have used but I do believe that the cause we are putting our minds and hearts to is most noble and very worthy. I would like to thank FIAF for bestowing this award upon me and I would also like to express my gratitude to Mr. Christopher Nolan and Mr. Martin Scorsese whom I have the great honour of meeting. I would like to thank them for taking the time to be a part of the ceremony and their words of appreciation. I am aware of their dedication towards preserving and restoring cinema and I consider it a privilege to be joining an esteemed group of artists around the entire world working for the common cause of preserving cinematic heritage. As artists I believe we have a duty to preserve what we create. Our work presents a lifetime of passion and devotion to our craft. We need to ensure that we preserve this legacy in memory of all those who came before us, and in recognition of the moving image as an art form in a visual document of human kind. Thank you very much and this is a great honour and something that not just the film industry in India but the whole country will be very proud of. I am just a small element in the Indian film industry. When you honour me, you honour the Indian film industry, you honour my country and most of all you honour this cause of film preservation.”

Talking further on the importance of preservation of cinematic heritage, Bachchan acknowledged his wife Jaya Bachchan’s role in orchestrating awareness around the subject, “I had not been drawn towards film preservation until I was introduced to Film Heritage Foundation and I have to thank my wife Jaya for informing me of what was happening in the field of preservation and its importance and introducing me to Film Heritage Foundation. What comes to my mind is that we don’t ask these questions about monuments, paintings, crafts, folk art, dance and theatre as we instinctively accept that these are all living symbols of our history and culture. Unfortunately, cinema which is a relatively new entrant in the world of arts, being just a little over a century old, is generally regarded in India as a medium of mass entertainment. So, to be forgotten once the lights come up, is almost unpardonable. In the world we live in today, the moving image is one of the pervasive influences in our life. Films in all forms are a reflection of who we are and the times we live in, making them an integral part of our social and cultural heritage. When we preserve films, we are preserving our history.”

Elaborating on his role as an ambassador he further added, “If I can be an ambassador to promote Gujarat Tourism, surely this is a more important cause. I’ve been working closely with Film Heritage Foundation since 2015 to propagate and support their efforts to preserve India’s film heritage. We have sparked a movement of film preservation in India and all our neighbouring countries in just a few years. We have trained archivists at our annual workshops; we have been collecting every bit of our heritage that we can, as a result of which we have a rapidly growing collection of films and film related memorabilia, representing the diverse range of our country’s cinema. But there is much that needs to be done. The most important of which is to realize our vision to set up the country’s first centre of the moving image dedicated to the celebration of the art, the culture and the heritage of film. The centre will be a living testament to India’s rich film heritage and its power to reflect and influence our culture.

As an ambassador, for the cause, it is my goal to do everything in my power to campaign for the support of the government and my colleagues in the film industry to make this vision a reality. We are the largest film making nation in the world and it would be a great loss if we cannot preserve what we have been creating for the past 100 years. We will be dead and gone but we have to leave something for posterity. I have always believed that cinema is one of the greatest integrators in this fast-disintegrating world and cinema is one element that unites people together. When we buy a ticket to go into a theatre, we never ask the caste, the creed, the color or the religion of the person sitting next to us. Yet we watch the same product, we laugh at the same jokes, we cry with the same sentiment, we sing the same songs. In today’s world where do you find these elements? You find it in cinema and therefore its preservation is extremely important.”