While Janhvi wore a pink-sleeved, graphic top with white printed shorts, Varun had a simple navy-blue vest on him with a pair of matching grey trousers 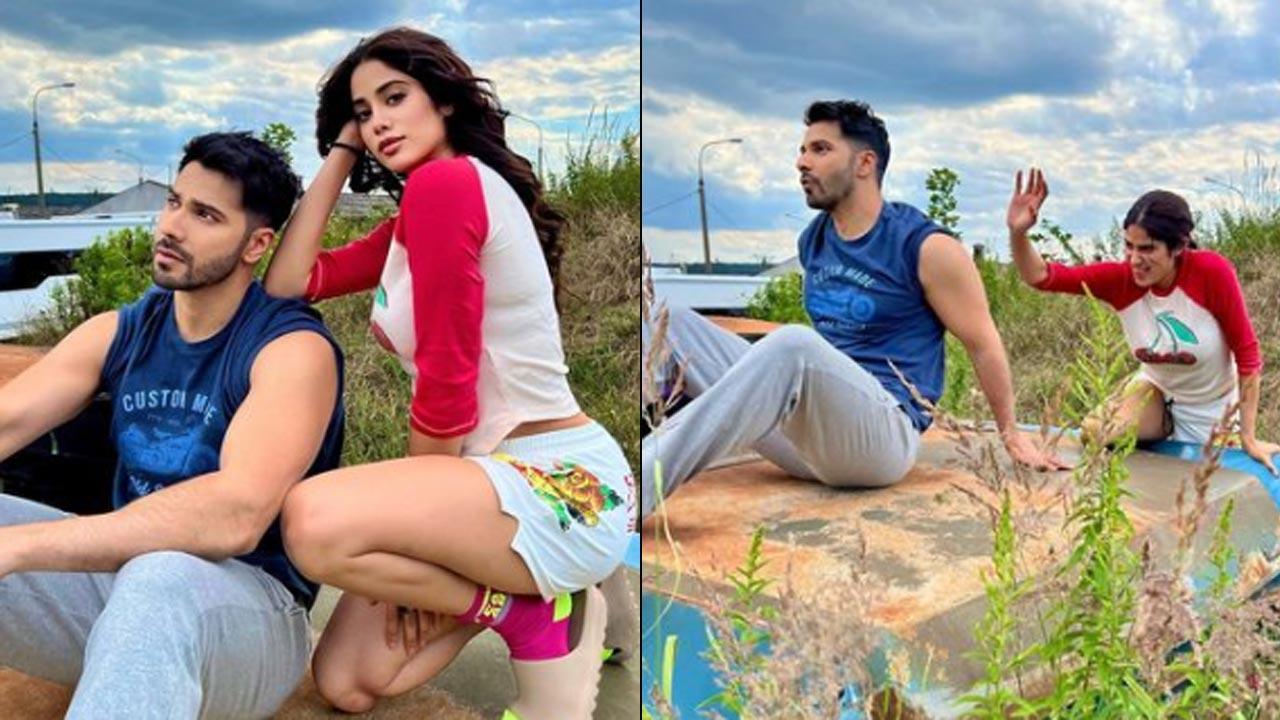 
'Bawaal' co-actors Janhvi Kapoor and Varun Dhawan treated fans with fun pictures after wrapping up their film shoot in Poland. Taking to their respective Instagram handles both Janhvi and Varun dropped pictures of the duo enjoying their time in Poland. "Instagram vs reality" captioned Janhvi, contrasting two pictures in two slides.

In the first picture, Janhvi struck an alluring pose, resting one hand on Varun's shoulder as she faced the camera while Varun seemed to be lost in his own thoughts, staring up at the blue Poland sky. While Janhvi wore a pink-sleeved, graphic top with white printed shorts, Varun had a simple navy-blue vest on him with a pair of matching grey trousers. According to Janhvi, the first image was the Instagram version of their friendship.

However, fans soon got to see the 'reality' of the duo in the next slide where Varun, was seated on the bonnet of a car as Janhvi was behind him, seemingly trying to call her co-star to help her get up as well. Instead, Varun appeared to be nonchalant, looking forward, enjoying the view, and giving a deaf ear to Janhvis' pleas. Apart from Janhvi, Varun also dropped some images on Instagram, featuring himself and Boney Kapoor's daughter, announcing the wrap-up of their shoot. "Hawaayein. Finished another sched in Krakow now on to the next," wrote Varun.

Helmed by Nitesh Tiwari, 'Bawaal' is produced by Sajid Nadiadwala and is a social drama. Recently both Varun and Janhvi announced that they had wrapped up their shoot for 'Bawaal' in Amsterdam and now the two have completed filming in Poland as well. 'Bawaal' marks the first collaboration of the lead cast Varun and Janhvi. The film is slated to hit the theatres on April 7, 2023.

Meanwhile, talking about 'Dhadak' actor, Janhvi, she is soon to be seen in Sidharth Sengupta's upcoming comedy crime thriller 'GoodLuck Jerry'. The makers released the official trailer of the film on July 14 and have created quite a buzz. 'GoodLuck Jerry' is all set to premiere exclusively on the OTT platform Disney+ Hotstar from July 29, 2022. On the other hand, Varun Dhawan will next be seen in Dinesh Vijan's horror-comedy film 'Bhediya' with Kriti Sanon, which is all geared up to hit the theatres on November 25, 2022.

Next Story : Kartik Aaryan to star in Sajid Nadiadwala's next directed by Kabir Khan