Kangana Ranaut: I was drugged by a 'character actor' in my early days

Kangana Ranaut said that she had experienced drug abuse at the hands of a man she referred to as a character actor. Later, the man also assumed the role of her "self-appointed" husband 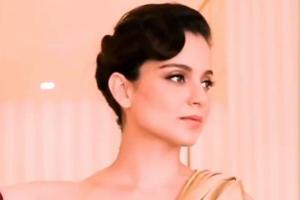 
Of late, Kangana Ranaut has been quite vocal and active on social media. The actress has been calling out Bollywood for nepotism and asking for a fair investigation into Sushant Singh Rajput's death. She has openly spoken about favouritism in the Hindi film industry by the "gangs" of Bollywood, which she has often tagged as "movie mafia" and "Suicide Gang" of the industry.

A few days back, Kangana made some shocking revelations about drug use in the film industry. She also said that she had experienced it at the hands of a man she referred to as a 'character actor'. Later, the man also assumed the role of her "self-appointed" husband.

Speaking to Republic TV, Kangana recalled an incident during the early days of her career when she was staying with an 'aunty' in the city. It was during this time that this character actor befriended her and promised to help her in finding work. He soon became her 'self-appointed mentor'. Later, he fought with the aunty and asked her to leave.

"But he kept my belongings in the home and locked me. And whatever I would do, his staff would straightaway give updates to him. It felt almost like a house arrest. He took me to parties and once I felt an intoxication that led to intimacy between us. Then I realised that it was not done willingly, but my drink had been spiked. And after that incident, within a week, he became my self-appointed husband. And if I tell him, 'you are not my boyfriend', he'd charge at me with slippers to hit me," she said.

She also said the harassment continued even after she got her first break. Kangana's first film was Gangster in 2006. She mentioned how the development upset him. "When I got the break, he was agitated. He started telling me after drinking that he never expected that I will get a break so soon. After that he started sedating me with injections, so that I am not able to go to shoots. I told my director Anurag Basu about it. If he would hit me and I'd have bruises, Anurag would make me stay at his office for many nights, to protect me."

Also Read: Kangana Ranaut's Message For Her Brothers Who Are Set To Marry In November: Where Did We Lose All Those Years

On the work front, Kangana will be next seen in RSVP'S air force film Tejas. Tejas is the story of a daring and fierce fighter pilot, played by Kangana Ranaut. The Indian Air Force was the first of the country's defence forces to induct women into combat roles in 2016. The film takes inspiration from this landmark event.

Kangana Ranaut talking about the film said, "Tejas is an exhilarating story where I have the privilege of playing an air force pilot. I am honoured to be a part of a film that celebrates these brave men & women in uniform who make immense sacrifices in the line of duty everyday... Our film celebrates the armed forces and its heroes ... Excited to take this journey with Sarvesh and Ronnie."

Apart from Tejas, Kangana will be next seen in Thalaivi and Dhaakad.

Next Story : Disha Patani is India's Most Desirable woman as per an online survey