The brother, played by Akshay Kumar, is having a rough time finding suitable boys for the girls. His girlfriend and her father are having a hard time waiting for this brother — Bhumi’s character needs to marry too after all, what else is the point of life! 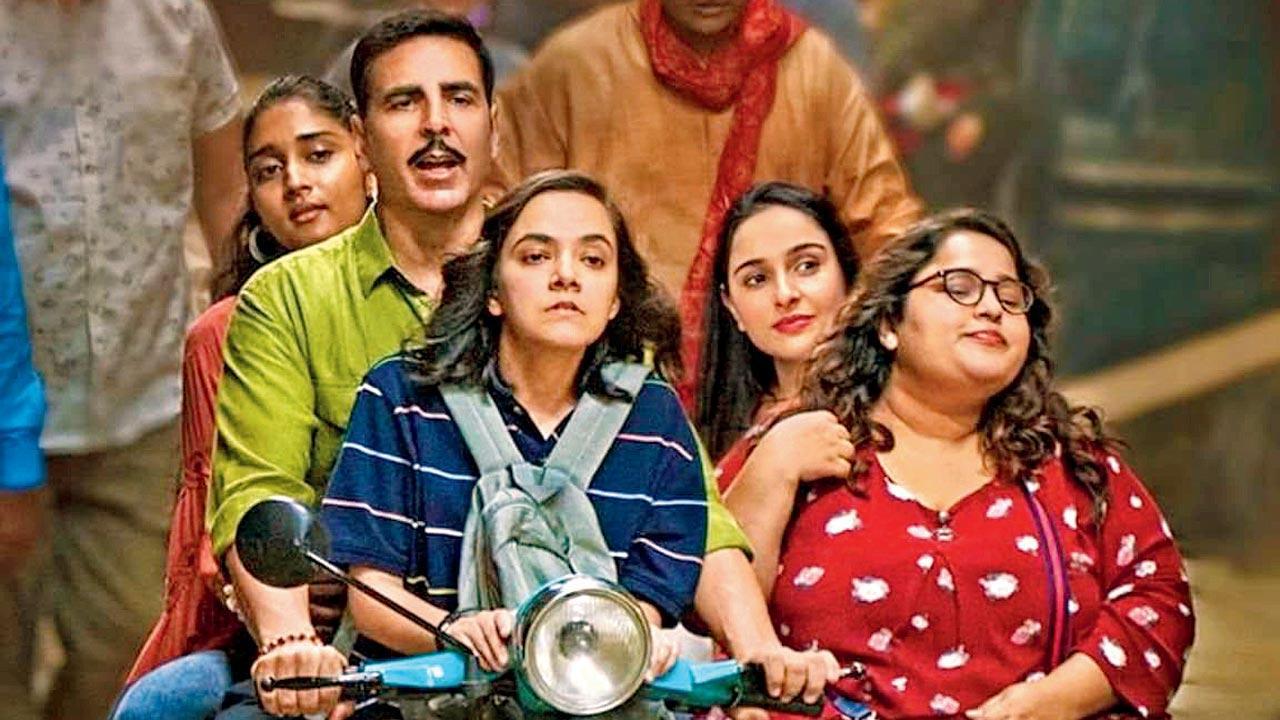 It’s quite astounding that my eyes have been fixated to the big screen for a film that totally slips southwards right from the first scene. What am I so intently looking at? It can’t be the film itself, where it’s been over 30 minutes and the plot has not inched a second beyond where it started.

Which is that there are four girls to be married off. There is a brother (Akshay Kumar), whose life’s sole mission/purpose/responsibility is to see his sisters married off, before he can marry his own childhood sweetheart (Bhumi Pednekar).

This brother is having a rough time finding suitable boys for the girls. His girlfriend and her father are having a hard time waiting for this brother — Bhumi’s character needs to marry too after all, what else is the point of life!

Okay, it’s nearing an hour now, and that chakka (wheel) is still stuck at the same point in Chandni Chowk. And it’s not like this is some character-driven cinema, and we’re learning anything new about this family from Old Delhi anyway.

So why am I looking so closely at the screen, again? Only to figure when is this film set. There are some tell-tale signs. There is a dedication to the Barjatyas in one of the film’s opening slates.

The hero is wearing a Casio digital watch. I don’t quite see any cellphones around. The camera never really pans outside the open, cardboard jungle of a set to reveal much of the actual world beyond. Is this really a 1990s film, without the audience being told about it? If that’s so, why not tell?

Or have we gone further back in time, since the lead is called Lalaji — you half-expect a wily Muneemji to show up as well. Lalaji sells golgappas that guarantee a male child. The line outside his store is unmanageable.

This hero mercilessly derides the unmarried girls in his house, for their looks — one’s fat, the other tomboy, third one is dark-skinned. Only the slim, fair-skinned fairy, with dark long hair, is the easily eligible. She’s up for a discount in the dowry mart.

The other issue with the male-lead, decidedly with a God/saviour complex, is that he also has to keep his sisters from harm’s way. Since, you know, men on the street will do what they do.

At one point, he announces to his mohalla over the megaphone, that anyone who teases/catcalls (“chheda”, basically; it also means molests) any of his sisters will have to marry them in return!

Now that much over an hour is up, and we’re still there, you begin to wonder if this is a film simply reflecting how regressive a society is, or in effect normalising it, sometimes to the point of celebrating certain thoughts/traditions instead.

There’s a thin rakhee-like dhaga between the two, and something I sensed a couple of films by Aanand L Rai have crossed inevitably — such as Raanjhanaa (with stalking), or Atrangi Re (on forced wedding). Nope, not passing judgement on intentions. Only stating discomfort as an audience.

Of course, you can’t get away endorsing dowry anymore. Neither does this pic, eventually. Up till then there’s Akshay Kumar going all out to bring energy into an ennui inducing story (or the lack of it) — even falling over his pyjamas for the cheap laughs. He wouldn’t have to try so hard on the set, if the same effort had gone into the script.

But maybe this isn’t so much about the script/story, as it is about recreating an old world missing from mainstream, desi movies — of the bhai and the behens, the baap and the beti, the bidaai song, followed by the funeral song, the rishtas, pheras, and the samosas.

Since everyone has an opinion on why audiences have eluded Bollywood lately, one of the things you often hear is how Hindi films have alienated its core base, by abandoning familial bonds and tearful emotions from its subjects. Something that television soaps took over from, in the late ’90s. This is a Raksha Bandhan release, so to say.

So you kinda know where this is coming from. Even if you can’t tell where it’s going with it. Either way, thank god, it’s over; I gotta go!

Next Story : Have you heard? A showbiz dramedy for Aryan Khan's debut venture