Toofaan Movie Review: Too (much) fun? Thoda sa though!

At 20 minutes shy of three hours! Which might make Toofaan seem like such a long movie. But given how much it packs into its compressed timeline, with breathless energy, without a moment of pause, let alone to ponder —you wish sometimes that all of it was stretched into a series instead. 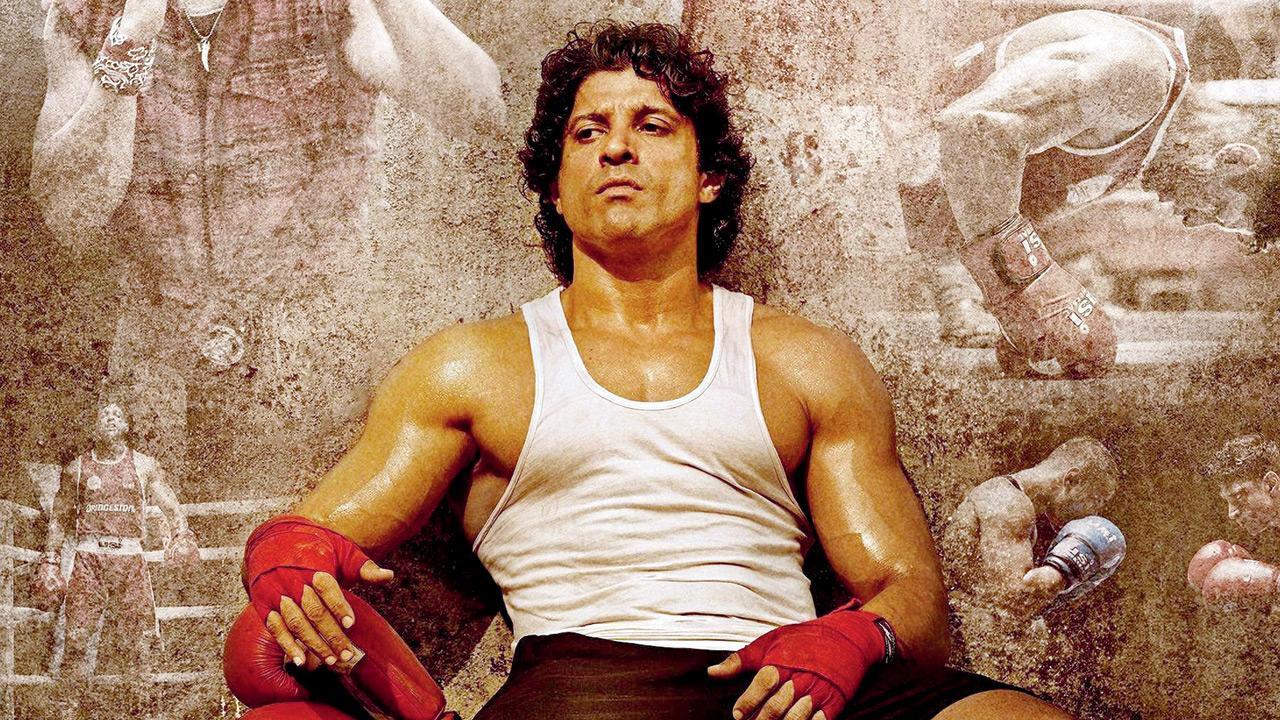 A still from 'Toofaan'

This had the tools, material, and makings of a great film.  Alas, it stops at just about being good enough. Stops when? At 20 minutes shy of three hours! Which might make Toofaan seem like such a long movie. But given how much it packs into its compressed timeline, with breathless energy, without a moment of pause, let alone to ponder —you wish sometimes that all of it was stretched into a series instead.

And yet, the reason I could go all the way, I suspect, is because I’ve missed a traditional, old-world Bollywood entertainment experience/space of this sort, in a theatre, for far too long. Which is where this film rightfully belongs. With enough cut-paste masala in it to keep you casually hanging — so long as the pop-corn tub on your lap hasn’t bottomed out.

What do I mean by that exactly? At least four Bollywood movies, in succession, for the price of one! Starting with Zoya Akhtar’s Gully Boy, about a Muslim ghetto boy in Dongri (here), instead of Kurla, fighting his way to survive; playing along with priceless patois, “Bantai,” “Chances nai”, etc. And hip-hop for background score.

Mani Ratnam’s Bombay, since inter-religious marriage and ‘khadoos baap’ is at the centre of conflict. Abhishek Kapoor’s Rock On, about a man quitting his life of passion, to pursue work that marks him out as worldly wise instead. And, eventually, Shimit Amin’s Chak De India, about fighting to restore one’s dignity/honour.

It’s almost like whenever the writers were stuck with where to go with the story next, someone threw at them a well-watched movie for a solution. What’s the issue with all of that? Transition, of course. Meaning, seamlessly moving from a plot to another — as goals shift, so does the goal-post.

This over-packing may be a sign of under-confidence over being able to see a single point through. Some of it might be deliberate. While the frames are neatly lit, and sets studiedly designed, which is undoubtedly director Rakeysh Omprakash Mehra’s forte anyway.

Take the case of Paresh Rawal. He plays a boxing coach, who’s unreservedly a religious bigot — holding strong prejudices against Muslims at large. Why? Apparently his wife died in a terror attack! This might seem a slightly lame point to hate on 1.8 billion people in the world, who had nothing to do with it! But is his worldview resoundingly challenged? No, and I can imagine certain audiences having an issue with it. As they must.

Yet, in the fearful times of random FIRs issued against art/expression, the fact that the mainstream filmmakers bring up the bogey of ‘love jihad’ itself (or even inter-community housing in Bombay) might seem an important thing to do.  Glad, they do.

Likewise the girl in question (the ever gently grinning Mrunal Thakur), boxing coach’s daughter, is a Dadar/middle-class medical doctor, who’s fallen for the Dongri dude. Do we see this unlikely love blossom in mysterious ways, as it would? Bahut time jayega! But we know the Hindu girl and Muslim boy fall for each other. Guess a bigger issue in this coupling is likely to be class. She’s the posh reformer; he’s the orphaned ruffian.

At the core of all these tropes is actor Farhan Akhtar, inside the ring/rope, as it were. Let’s not forget, this is essentially a believably choreographed ‘boxing film’ — in a country that hardly has a professional boxing culture, so to say. It’s set around state-championship levels. Goes without saying, Akhtar is up against all possible odds.

Firstly, this is entirely a young man’s movie to shoulder — about finding first love in life, or seeking greater glory in sport. Even if it’s been made at Akhtar’s behest —produced by him, and he’s taken “story idea” credit for it too. He’s currently 47. Which is why, half way through the movie, I was wondering — really, what’s at stake here?

To be fair Robert De Niro was 35 when he played a 19-year-old Jake LaMotta in Raging Bull. Saying this because De Niro is apparently Akhtar’s hero. And this film may not be a coincidence in that regard. In terms of the Bombay lukkha lingo/swag, Akhtar kinda plays it straight, without looking like he’s trying too hard. But it’s his physical transformation that genuinely draws you in. Perhaps in ways that I wouldn’t have cared for so much, or at all, if it wasn’t Akhtar — besides many things, the lead from Zindagi Na Milegi Dobara (2011), which released exactly ten years before this film’s dropped online.

This is effectively a smartly curated show-reel to showcase Akhtar’s genuinely inspiring makeover. Impossible to be dismissive about it, or altogether ignore either. And since you can’t — you’ve breezed through a relatively understated, redux version of a star-power script that Sunny Deol would’ve led with, back in the ’90s. Impressed, for sure. Loved it though? Nope. Regretted? Not at all. Yeah it’s one of those.