Watch Video: Ayushmann prepping for his role in Dream Girl is hilarious

In the video, Ayushmann Khurrana is getting ready for a scene all decked up in a lehenga choli and bindi while the crew is giving final touches to his look. 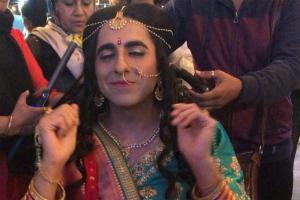 
Ayushmann Khurrana recently dropped the trailer of his latest movie Dream Girl in which he essays the role of a young man imitating female voices, which leads to hilarious results. The trailer of this film garnered over 15 million views in less than 24 hours. The trailer of the quirky family entertainer is already winning hearts.

Now, his co-star Nushrat Bharucha has shared a hilarious BTS video in which we can see Ayushmann bringing his character alive. In the video, the Badhaai Ho actor is getting ready for a scene all decked up in a lehenga choli and bindi while the crew is giving final touches to his look. Ayushmann and Nushrat can also be seen indulging in a fun banter.

Speaking about Dream Girl, the movie is set against the backdrop of Mathura. Dream Girl is a comedy of errors with an ensemble cast of Annu Kapoor, Vijay Raaz, Abhishek Bannerjee, Manjot Singh, Nidhi Bisht, Rajesh Sharma, Raj Bhansali among others.

Ayushmann Khurrana, who has dubbed in a female's voice, spoke at length about his character in an interview. He said, "In our country, there has been a tradition, whenever Ramleela happens, a boy becomes Sita. But we never gave this any importance. This doesn't happen anywhere but in India. I want to do films which tell our lesser talked about stories".

"The character that Raaj has written is unbelievable. I don't think I've done any film being this fearless. I've usually played in subtlety but this one is out there and a lot of fun," he added.

On August 14, the makers released the first song from the movie, titled Radhe. The song is sung by Amit Gupta and written by Kumaar and Shabbir Ahmed and is all set to start a laughter riot just like the trailer. Speaking about Ayushmann's appearance in the song, director Raaj Shandilyaa said, "When Ayushmann had to dress up as Radha or Sita, he lost weight and worked on the nuances to look feminine."

National Award-winner Ayushmann will be playing mythological characters, Sita and Draupadi, and lending a female voice to these characters, which adds a feather to his cap and uniqueness to the storyline. Directed by Raaj Shandilya and produced by Ekta Kapoor, Shobha Kapoor, and Aashish Singh, the film is all set to hit the screens on September 13, 2019.

Also Read: Nushrat Bharucha on working with Ayushmann Khurrana: It was fun pulling his leg