In a buzzer round, when Karan asked Vijay and Ananya to dial their celebrity friends and get them to say, "Hey Karan, it's me" 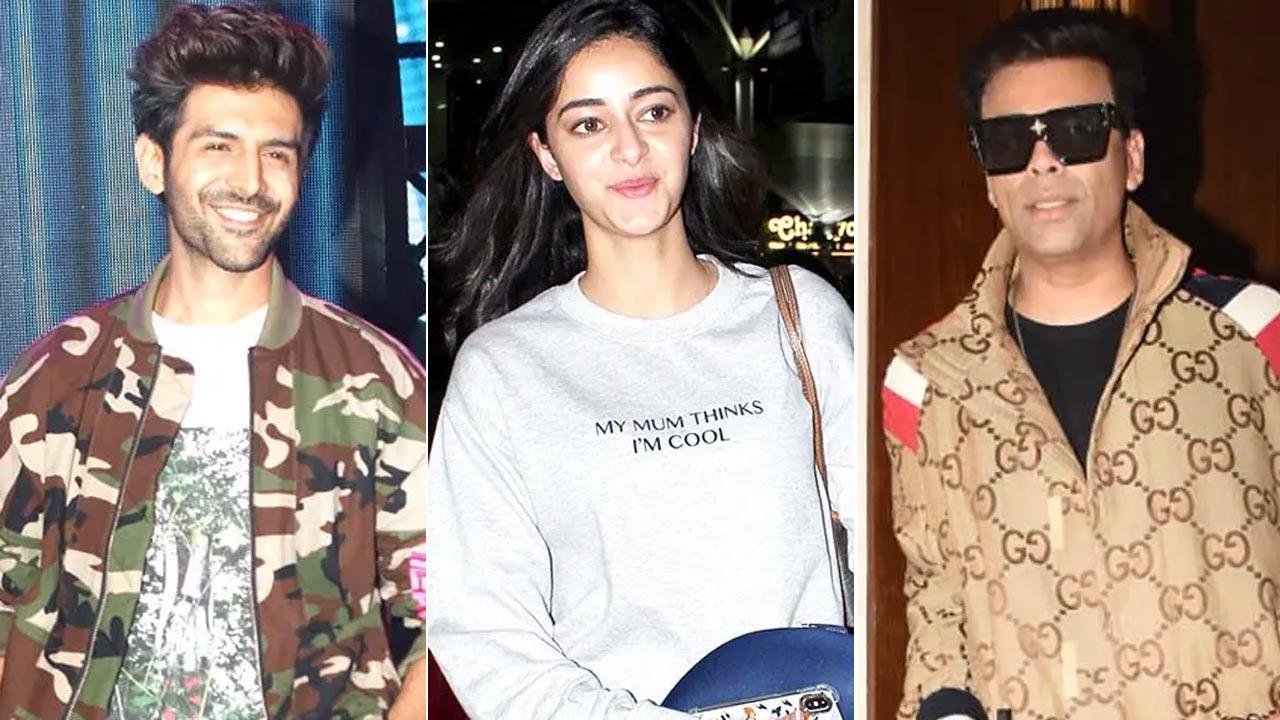 
Tiff between Karan Johar and Kartik Aaryan has been in the news ever since the 'Bhool Bhulaiyya 2' actor was ousted from Karan's upcoming film Dostana 2. However, the duo now seems to have buried the hatchet! In a new episode of 'Koffee With Karan 7', Ananya Panday connected Karan and Kartik over a call. Ananya graced Karan's show along with her upcoming film 'Liger'co-star Vijay Deverakonda.

In a buzzer round, when Karan asked Vijay and Ananya to dial their celebrity friends and get them to say, "Hey Karan, it's me." Ananya called up Kartik and asked him to help her out. Ananya putting her phone on speaker, Ananya said "Kartik, Kartik, say 'Hey Karan, it's me' and tell him what you're doing." At this moment, Karan Johar jumps in and said "He's again promoting Bhool Bhulaiyaa 2 if I know right."

Kartik in response said, "I'm at home, promoting Bhool Bhulaiyaa 2." Later Karan thanked Kartik for participating in the game. Earlier, a video, that went viral on social media, showed both Karan and Kartik having a friendly chat during an award show.

In the video, Karan and Kartik were seen seated next to each other at a roundtable. The two engaged in a conversation and shared a laugh before they walked on the stage to dance together. Kartik was taken to the stage by Varun Dhawan. Ranveer Singh, Kiara Advani, Arjun Kapoor, Ayushmann Khurrana, Anil Kapoor, Kriti Sanon, and Sidharth Malhotra who were already on the stage performing. Along with Varun, Karan and Kartik later performed the hook step of the song 'Nach Punjaaban' on stage.

For unversed, Kartik and Karan reportedly had a falling out in 2021, while working together on Dostana 2. Kartik was to star with Janhvi Kapoor in Dostana 2, but the actor was dropped from the project. Karan Johar's Production House 'Dharma Productions' officially announced Kartik's exit from the film. In their official statement posted on Instagram, the production house stated that "due to professional circumstances, on which we have decided to maintain dignified silence- we will be recasting Dostana 2, directed by Collin D'Cunha. Please wait for the official announcement soon."

On the work front, the 'Dhamaka' actor will be seen in 'Shehzada'. Kartik recently announced that he has signed a project with Sajid Nadiadwala's production house which will be helmed by Kabir Khan. Though the details of the project have been kept under wraps, it is speculated to be a massive entertainer on a large-scale production based on true events.

He will also be seen in 'Freddy' opposite Alaya F. Produced by Ekta Kapoor, the film is touted to be a romantic thriller. He also has Hansal Mehta's 'Captain India' in his kitty. Bankrolled by Ronnie Screwvala and Harman Baweja, the film revolves around India's most successful rescue operations from a war-torn country.

On the other hand, apart from 'Liger', the daughter of Chunky Panday will also feature in Arjun Varain Singh's 'Kho Gaye Hum Kahan'. The film stars Siddhant Chaturvedi and Adarsh Gourava and is written by Singh, along with Zoya Akhtar, and Reema Kagti. It follows the story of three friends.

Next Story : Grateful for every insult, hardship in my life, says Vijay Deverakonda in 'Koffee with Karan 7'