Making of an entrepreneur Nitin Pandey, The mind behind Insta group

Through his knowledge and insights, Pandey was able to expand the company's presence on both online and offline channels 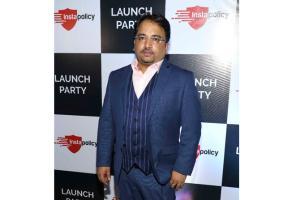 
12 years ago the insurance sector was only made up of a few big private corporations. This is when a young and dynamic Nitin Pandey forayed into the industry with the hopes of revolutionizing insurance broking by making Insurance accessible to every Indian.

Born in Chichara, a small village in the heart of Uttar Pradesh, Mr. Pandey had big aspirations from a very young age. When he was a teenager, he moved with his family to Lucknow where pursued his education at St. Ann's Day Inter College. Mr. Pandey wanted to find a job after he completed his higher studies. Mr. Pandey's father, however, did not want him to take up a small job. Mr. Pandey had to make a tough decision but he eventually convinced his father and became the first person in his family to take up a job in a private company.

His first stint in the insurance sector was in 2007 when joined ICICI Lombard along with his friend, as a sales officer. He was also simultaneously pursuing his Bachelor's in Computer Application from Allahabad University at the time. With his tremendous drive, he was able to achieve both professional and educational excellence. During his time at ICICI Lombard, he learnt a lot about the insurance sector and honed his sales and business development skills. In 2008, he had to leave the company due to some personal reasons.

Mr. Pandey then worked with a couple of major Insurance broking companies and expanded his portfolio. A few years later, after scaling the corporate ladder through his hard work and dedication, Mr. Pandey was promoted to the role of Head of Retail Corporate Business and Online Vertical In previous organization and transferred to Mumbai. In previous organization along with his team of highly motivated individuals, he was able to set up a robust online network for Insurance broking. He was also instrumental in setting up an extensive offline channel and because of this; he frequently travelled between Lucknow and Mumbai.

In 2017, Mr. Pandey in Mumbai during one of his business meetings he received a proposition to become one of the stakeholders at an Insurance broking startup, for a retail insurance aggregating platform. He took up the opportunity and asked his team at Pto join him in this venture. Through his knowledge and insights, Mr. Pandey was able to expand the company's presence on both online and offline channels. He was instrumental in the company's success in achieving a gross premium of more than 140 crores within the first 15 months of operations. The company soon became one of the leading online and offline retail insurance aggregators with its presence in over 15 states and 25 different cities. However, in 2019, Mr. Pandey had to part ways with the company due to certain personal differences with the management.

Mr. Pandey's drive to achieve his dream of creating a pan India insurance aggregating platform was still alive. In July 2019, Mr. Pandey bought out Instapolicy, a non-operational defunct company at the time. He successfully re-launched the company in October 2019 with the help of his dedicated team which had supported him right from his earlier days. At Instapolicy, Mr. Pandey overlooked every aspect of operation and worked with astounding resilience to make Instapolicy one of the major players in its sector. He created a comprehensive and user-friendly platform for boosting Instapolicy's online business while also setting up an offline network of POSP's across major states to offer extensive offline assistance. Instapolicy, with Mr. Pandey at its helm as chairman, was able to achieve a gross premium of over 60 crores within the first 6 months of operations. Instapolicy now is a team of over 100 individuals with branches in over 8 state capitals and is operational in over 800 cities through its POSP network.

For 2020, Mr. Pandey is now working on a couple of new projects in the BFSI sector. He launched Insta Fin, an online aggregating platform providing financial services like PMS, debentures, bonds, loans, SIPs etc., in February 2020. He will soon be launching Insta Info Tech which will focus on B2B operations and will give an opportunity for entrepreneurs to create their own insurance brokerage platform by providing services like enterprise risk management (ERM), retail brokerage software, etc.

Mr. Pandey also plans to expand Insta Group's portfolio into various other sectors as well, in the future and we can certainly say that his entrepreneurial drive isn't going to stop any time soon. To know more about Mr. Pandey's incredible corporate journey, you can connect with him on his social media platforms.

Next Story : Shlok Nair shares his work and success story with Team Okbronetwork