Mumbai: 22 lakh commuters have used AC train since December, 15,000 use it daily

Every single day, except weekends, it runs 12 services ferrying 1,306 passengers with an average passenger count of 15,666 since its launch 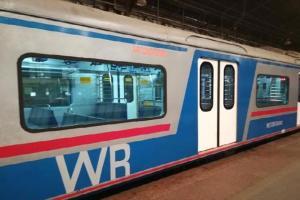 Over 22 lakh commuters have used the India's first Air-conditioned suburban train that runs on Mumbai's Western Railway since its launch in December 2017 and almost about 15,000 commuters use it for their daily trips, latest statistics from Western Railway revealed.

Railway officials said that the train service was launched on Christmas Day 2017 and in about seven months it has carried 22,40,462 passengers, earning a revenue of 9.35 crore from ticket/season pass sale.

Every single day, except weekends, it runs 12 services ferrying 1,306 passengers with an average passenger count of 15,666 since its launch.

With two vestibuled coaches, the AC local's capacity is three times more than a regular 12-coach local train. Railway officials said the vestibuled space allows more passengers, compared to a regular non-AC 12-coach train that has a capacity of 1,522.