This year, the theme was the change in the political scenario in Maharashtra as a result of the Shiv Sena's Eknath Shinde faction forming a government with the help of the BJP 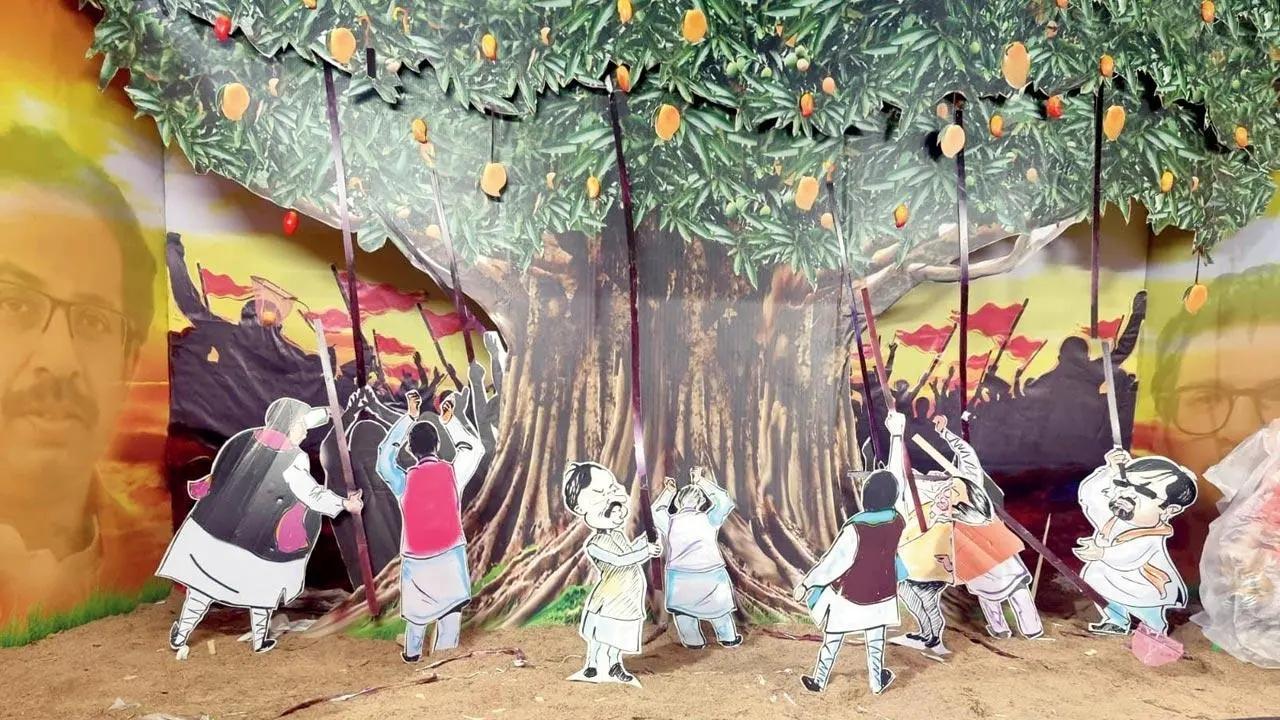 The mandal’s exhibit before being seized by Kalyan cops


The Bombay High Court on Friday permitted a Thane-based trust to install their Ganesh pandal with modified decorations based on the theme of the recent split in the Shiv Sena.

A special holiday bench of Justices Revati Mohite Dere and Madhav Jamdar heard a petition filed by the trustee of Vijay Tarun Mandal, challenging a notice issued to them by the police asking them to remove the pandal or face action.

The petitioner informed the bench that it has modified the objectionable portions of the decorations.

In view of this, the court permitted the pandal to display the modified decorations subject to permissions from the concerned authorities.

The petitioner had claimed that they install a pandal each year based on a theme. This year, the theme was the change in the political scenario in Maharashtra as a result of the Shiv Sena's Eknath Shinde faction forming a government with the help of the BJP.

Also Read: Mumbai: They slapped and hit me, says woman assaulted in Kamathipura

The decorations were accompanied by audio and video clips narrating details, the plea stated.

On August 25, the pandal was served with a notice under section 149 of the Code of Criminal Procedure (CrPC) containing directions to be followed for the decorations, failing which appropriate action will be initiated.

The next day, the deputy commissioner of the Kalyan police inspected the decorations, suggested the petitioner to make changes to the decoration and modify the audio clip, which was done, the plea pointed out.

The petitioner was also asked to remove cut outs of ministers, including one of Prime Minister Narendra Modi.

The plea states that despite this, on midnight of August 31, the Kalyan police officer confiscated the cut outs of the theme and orally directed the petitioner to not display the same.

An FIR was also lodged against the trust alleging sections 153 (giving provocation to cause riot) and 505(2) (statements promoting enmity) of the Indian Penal Code.

"A perusal of the FIR shows that the same is politically motivated and no offence as stated in the FIR is even remotely made out," the petition stated.

While the trust stated it would take steps to challenge the FIR through appropriate steps, the present petition was filed seeking quashing of the notice sent under section 149 of the CrPC.

The petitioner also sought for permission from the court to display the modified decorations with the audio clips for the tenure of the 10-day festival.

The trustee also invoked their fundamental right to free speech to display their political views.

While the bench granted permission to display the modified decorations and audio clips, they clarified the same was subject to permissions from the civic authority, the Kalyan Dombivili Municipal Corporation (KDMC).