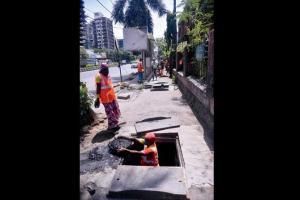 A worker cleans sewage during the COVID outbreak. Pic/Pradeep Dhivar


In December 2019, social worker and lawyer Abha Singh's public interest litigation (PIL) was heard in the Bombay High Court. The petition raised concerns over the increasing number of sewer deaths in Mumbai despite manual scavenging and unprotected sewer operations being banned.

"Manual scavenging is modern day untouchability and violation of Article 17 of the Constitution," Singh's plea said. The petition pointed out that in 2019, 12 persons died while cleaning sewers in Maharashtra, and protective gear was not provided to any.

Logo of the app, OAISAV

The PIL further indicated, "that the provisions of the Prohibition of Employment as Manual Scavengers and their Rehabilitation Act, 2013 (PEMSR Act, 2013) and the rules made thereunder (PEMSR Rules, 2013) are not being complied with."

COVID, the death wish?
However, this is just the tip of the iceberg, says the Open Academic Research (OAR), that works in the field of advanced research and education. OAR has now created an app to help sanitation workers. Manual scavenging involves humans cleaning clogged sewage and human excreta. With the outbreak of the Coronavirus infection, sanitation workers are at a greater risk. "Manual scavengers are officially unrecognised frontline workers who clean human biowaste, which includes SARS-CoV2 contaminated waste from the hospitals, diagnostic centres, and quarantine centres. The challenge has been to make them aware of the dangers of contracting COVID-19 and its repercussions on their lives," says Satyajit Mitra, MD and CEO, OAR. 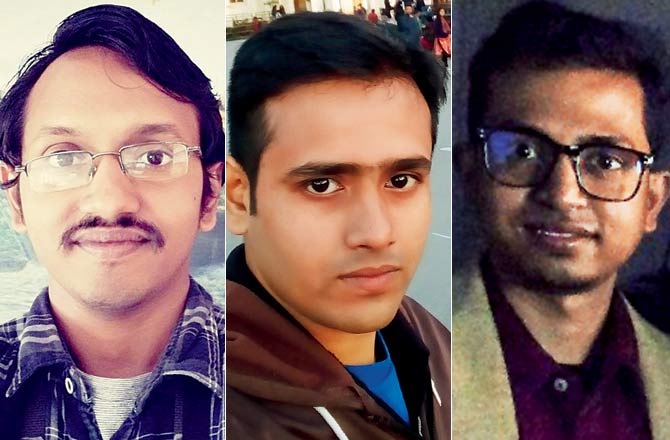 The risk has grown following the pandemic since this community has no access to information and is largely unaware of public health measures for its prevention and protection. In-person training is out of question currently given the rules of social distancing.

Technology to the rescue
The OAR team decided that film-based education was the answer. "Dr Harish Sasikumar has shaped the concept by working with OAR's young scientists and scriptwriters, photographers, and illustrators. He proposed to develop an open source platform called Open Automated Interpretation of Social Awareness Videos (OAISAV)," says Dr Siddharth Ghosh, director of science and vision, OAR Group.

OAR is collaborating with GAIUS, a hyperlocal community platform that enables content creation and access among local communities. GAIUS has been actively working with the Government of Maharashtra for COVID-19-related information broadcast. Dr Arjuna Sathaseelan, co-founder, GAIUS, will ensure dissemination of information among the community of manual scavengers.

Engagement is key
Dr Ghosh explains that the GAUIS application is already popular among low-income communities. They also hope to convert some users into volunteers or peer-instructors. The exercise will be incentivised by providing the volunteers with data-packs and smartphones or tablets free of cost.

Language, though, has been the biggest hurdle while making awareness videos. "India speaks so many different languages. The current version of OAISAV can translate the awareness videos that do not contain text. With this, anyone with interesting content can collaborate with us and make a video in their language," adds Dr Sasikumar, Postdoctoral Research Fellow at OAR and PhD from the Centre for Nano Science and Engineering, Indian Institute of Science, Bengaluru.

If everything goes according to plan, the team will be able to make the beta version of OAISAV available to the public within a month. "With a nominal user interface, we will publish it as an open-source software so that anyone who is interested can work on improving it. To manage the project technically and financially, we are looking to collaborate with interested parties, including telephone and Internet service providers," he adds.

The Union Ministry of Social Justice and Empowerment (MSJE), in a reply to a question by NCP Rajya Sabha MP Vandana Chavan, revealed that 282 sanitation workers have died while cleaning sewers and septic tanks in the country between 2016 and 2019. The highest number of deaths, 40, was recorded in Tamil Nadu followed by Haryana, which recorded 31 deaths in manholes. Delhi and Gujarat recorded 30 deaths each followed by Maharashtra and Uttar Pradesh, each recording 27 deaths. While the year 2016 accounted for 50 deaths, 83 sanitation workers died due to suffocation in septic tanks and sewers in 2017 and 66 deaths were recorded in 2018. Till November 2019, the death count across the country stood at 83. These figures, the Ministry maintained, were based on the number of FIRs filed by the police in respective states.

Next Story : Lockdown benefit: WR and BMC use free roads to work on Delisle Road bridge