Janmashtami 2022: From Worli to Thane, political churn is on 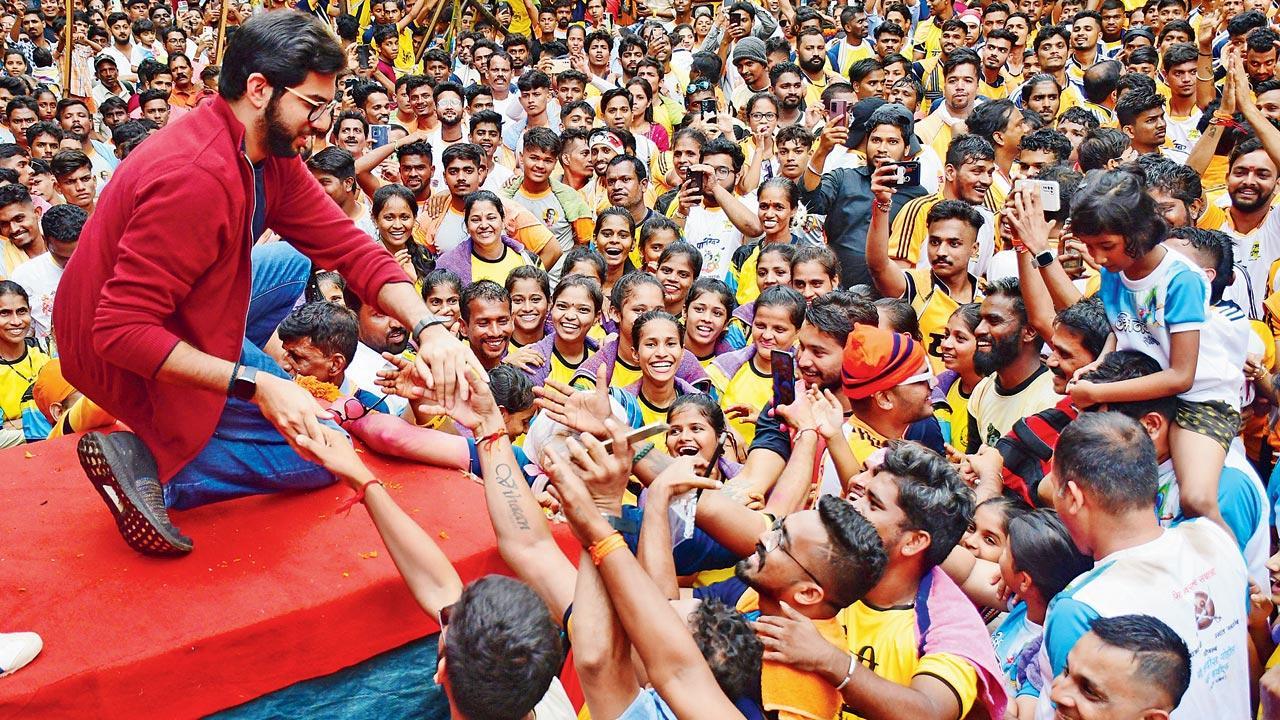 
The Dahi Handi, celebrated at a massive scale on Friday after two years, witnessed an aggressive political tug of war. Having returned to power in collaboration with rebel Eknath Shinde, the BJP snatched Sena’s Dahi Handi bastion in Worli, but Aaditya Thackeray wished to “keep politics away and just celebrate”. The chief minister, however, used the Dahi Handi grounds to make jibes  at his predecessor and pride at the rebellion that brought down the Uddhav government. 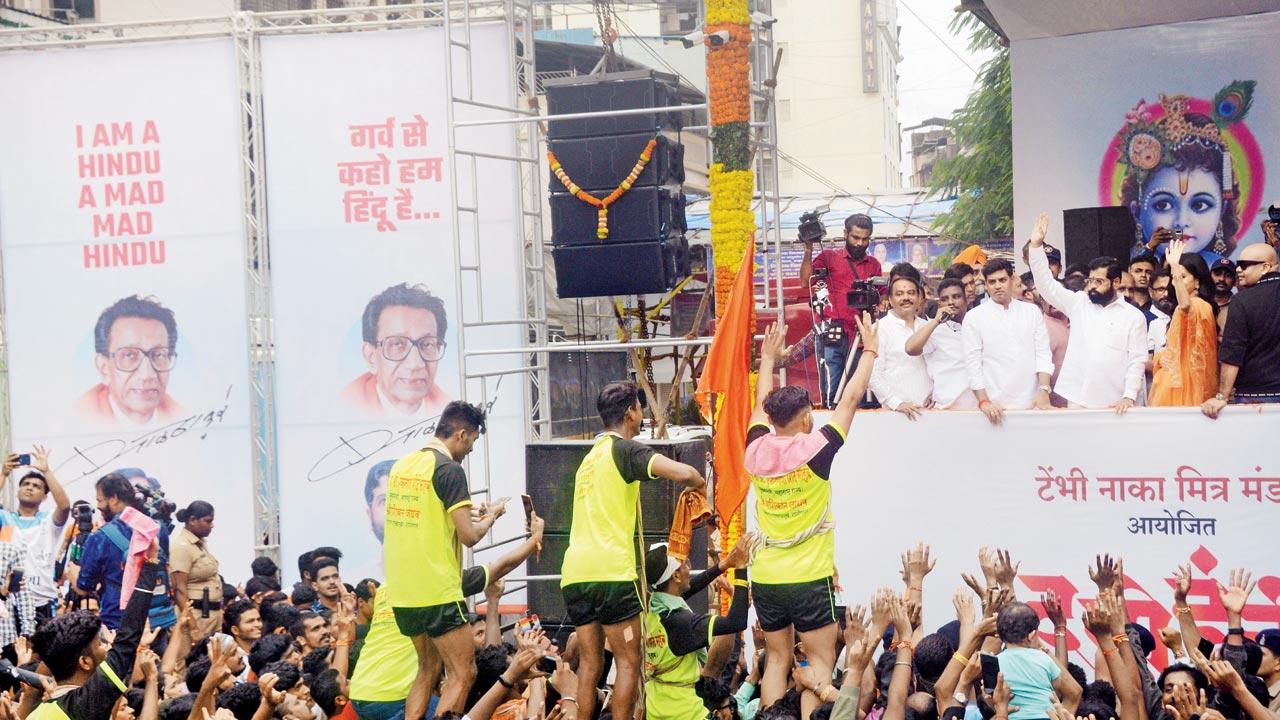 The return of full-fledged Dahi Handi after two years owing to the pandemic-related restrictions, witnessed an aggressive political tug of war on Friday. The Worli-Dadar celebrations were a clear indicator of the tussle, with the Shiv Sena’s last-minute scouting for a venue after losing its traditional festive grounds to the BJP. 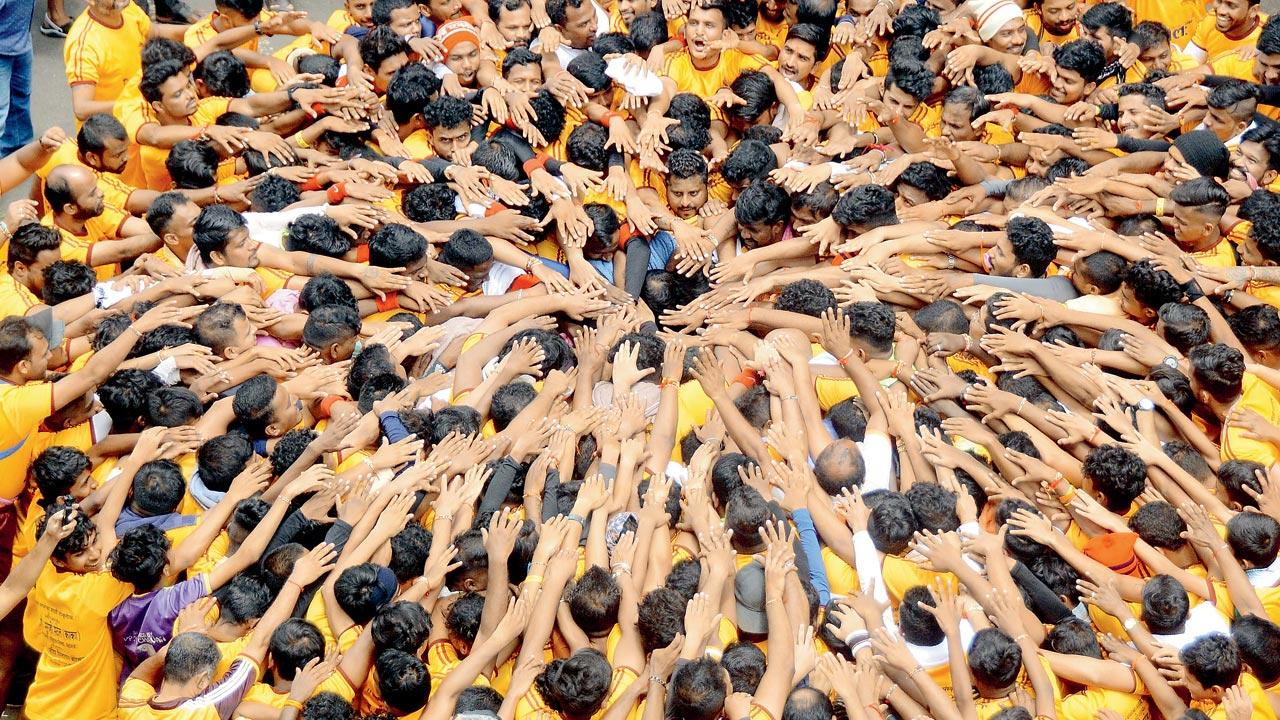 A Dahi Handi festivity in progress at Dadar on Thursday. Pic/Sayyed Sameer Abedi

After the BJP took over its Jamboree Maidan in Worli, the Shiv Sena celebrated outside Sena Bhavan in Dadar and termed it the Nishta [loyalty] Dahi Handi. Sena leader and former minister Aaditya Thackeray, along with former Mumbai mayor Kishori Pednekar, cheered on the Govindas. Thackeray said, “We do not believe in this theory of tug of war and find all this childish. We are celebrating this festival after a gap of two years and today, let’s keep politics away and just celebrate the occasion.” 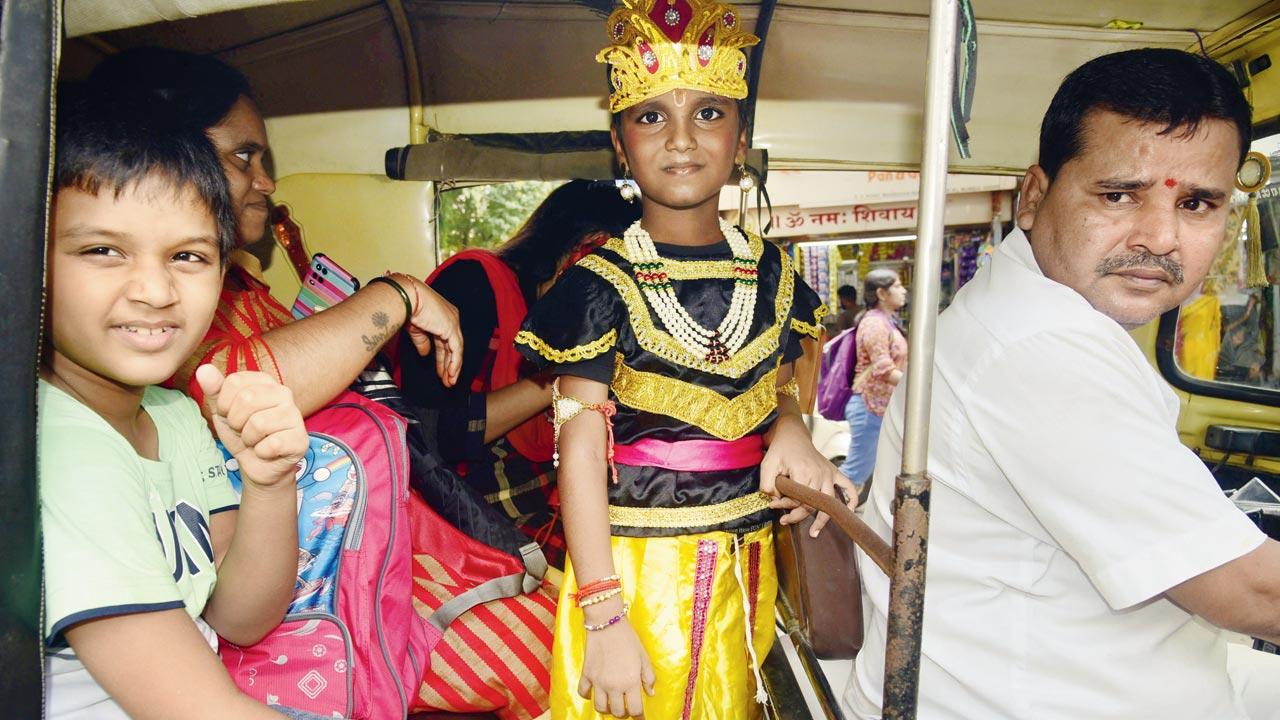 A child dressed as Lord Krishna travels in an auto in Dahisar. Pic/Atul Kamble

Earlier, Thackeray also visited events in Worli organised by local Sena leaders Hemangi Worlikar and Sunil Shinde, as well as in Byculla, Girgaon, Tardeo and Mahim to cheer on the Govindas. 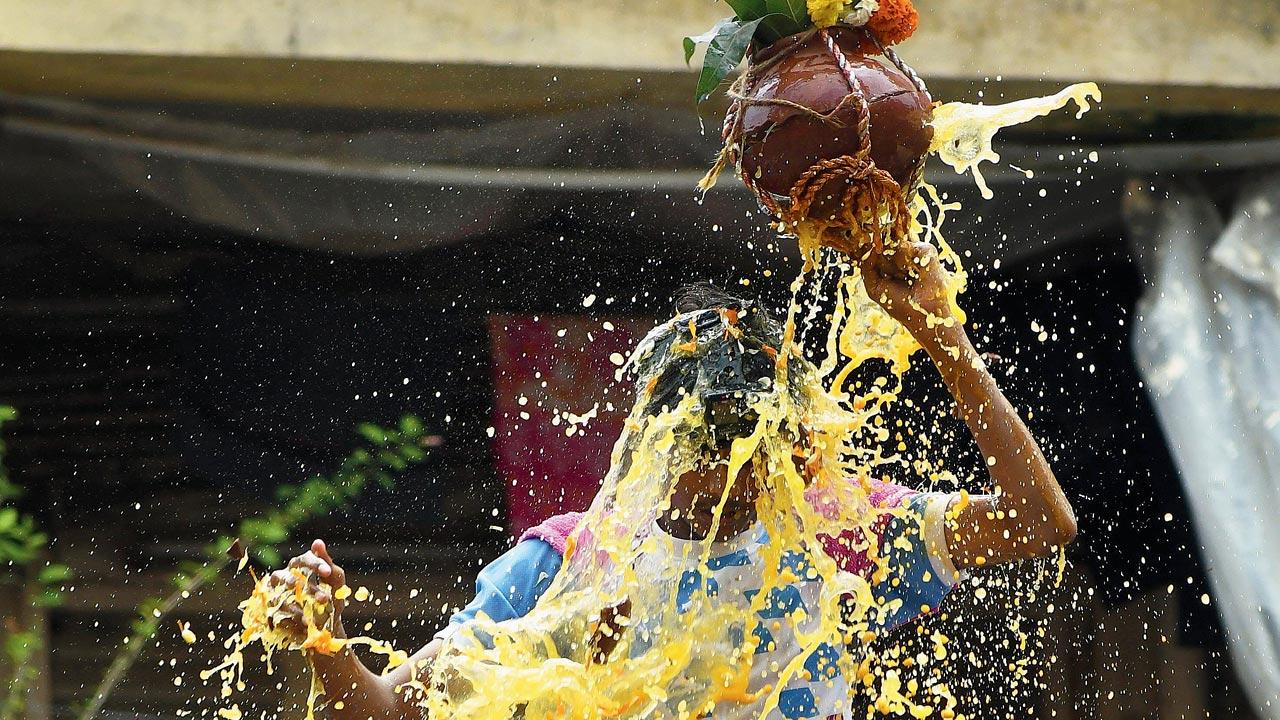 A boy smashes the dahi handi with his head at Khandke building galli, Dadar. Pic/Ashish Raje

At Jamboree Maidan, Deputy Chief Minister Devendra Fadnavis attended the Dahi Handi along with newly appointed city BJP chief Ashish Shelar and party leader Pravin Darekar. He refrained from making political statements, but pointed out how the Eknath Shinde government had certified all registered Govindas as adventure sportsmen and promised to take care of their medical bills. “You are all now sports teams and the government promises to look after your needs. Remember, this is the people’s government,” he told the Govindas. 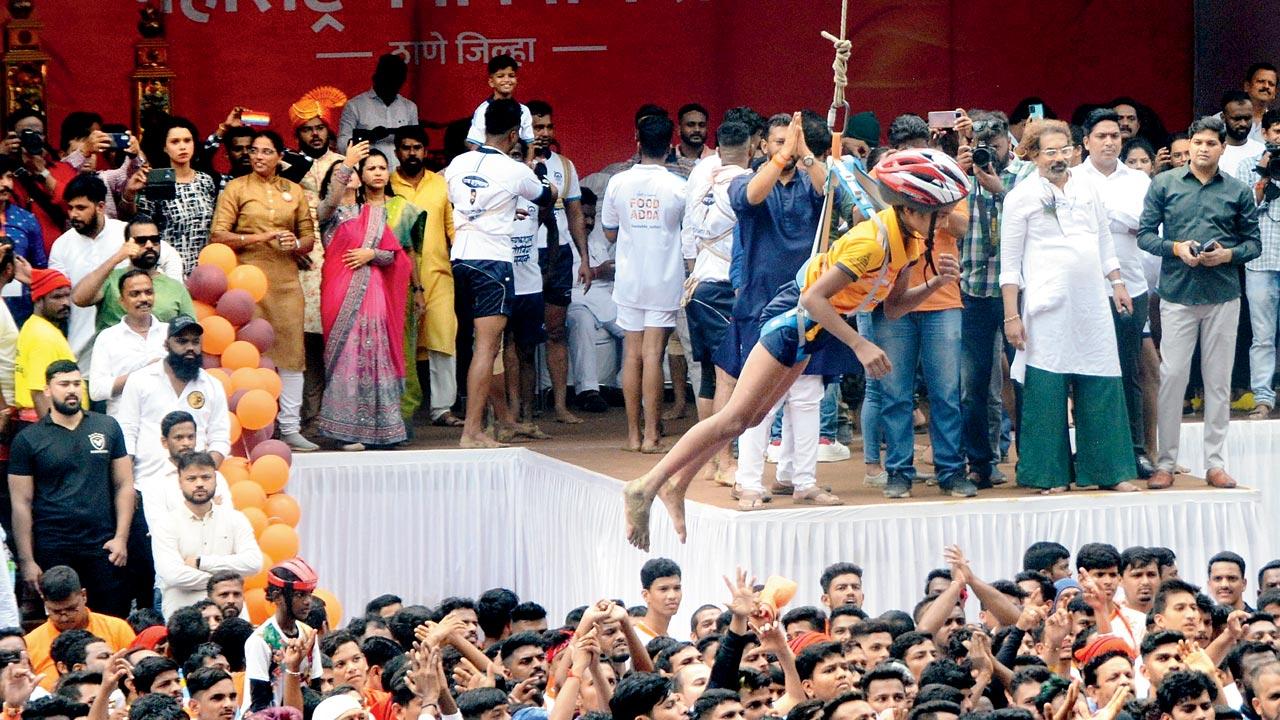 A boy who was at the topmost rung of the pyramid is left hanging from the harness, at Naupada in Thane. Pic/Satej Shinde

Sachin Ahir, who jumped ship from the NCP to Shiv Sena, organised Dahi Handi at Jamboree Maidan until 2015. Sena legislator Sunil Shinde continued the tradition and organised the event in 2019. But, the BJP took over this year. This venue holds significance, as Worli is a key constituency with a significant Marathi population and represented in the assembly by Aaditya Thackeray.

Janmashtami 2022: Watch How The City Of Mumbai Celebrated The Festival

This year, BJP’s Shelar entered the Sena bastion and booked the venue first and procured permissions, depriving Sena of their traditional Worli ground. The BJP organised over 370 events and approached an equal number of mandals.

Sena leaders said Thackeray father-son duo recently funded the transformation of Jamboree Maidan into a sports hub with upgraded facilities; hence they did not want to spoil the mood and go against local sentiments, and moved elsewhere.

To counter, the Shiv Sena organised a huge Dahi Handi event at Ram Ganesh Gadkari Chowk, at the junction of Shiv Sena Bhavan, in Dadar.

11
No. of Govindas injured during celebrations

Next Story : Borivli building collapse: They saw cracks forming and escaped in the nick of time